Global equities and futures on the , and dropped this morning, reinforcing the outlook that Friday’s equity slip on Wall Street may be the end of a corrective rally within a downtrend. This would, in turn, confirm that the market stands inches away from a bear market, as seen during Christmas Eve’s stock rout.

Chinese trade data posted the worst performance since 2016, with falling 7.6 percent and sliding 4.4 percent lower, seen as a direct result of the country’s trade war with the U.S. While the reading exacerbated preexisting fears of an economic slowdown, some investors may hope it sways U.S.-Sino trade talks toward a compromise.

Meanwhile, however, trade-sensitive sectors such as miners and tech firms drove Europe’s lower.

In the earlier Asian open, Hong Kong’s (-1.38%) took the hardest hit from China’s trade data miss. Australia’s was unscathed, edging only 0.02 percent lower. However, the was sold off, as its fate is tied to China, Australia’s largest trading partner. Japan’s shares were spared, as local markets were closed for a holiday. 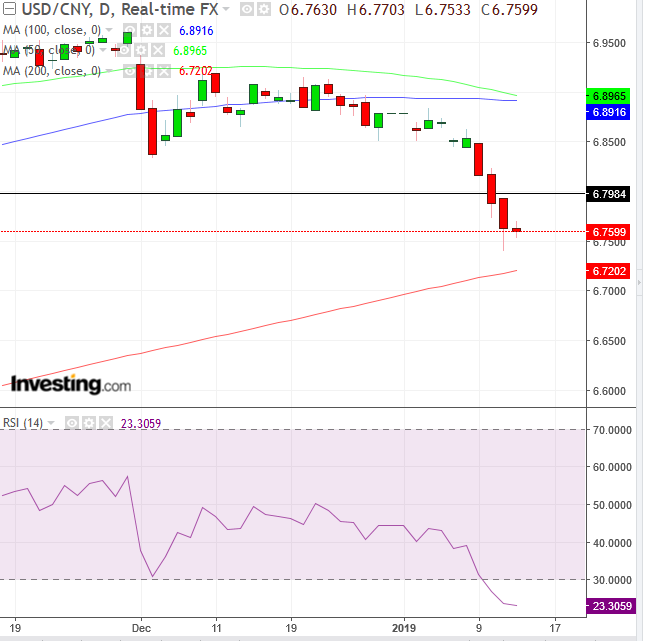 The dollar kept falling against the after Goldman Sachs upgraded its outlook for the currency. Technically, the USD/CNY may have topped out. However, investors should brace for a pullback, as the 50 DMA approaches the support of the 100 DMA, the price drop stalls above the 200 DMA and the RSI is the most oversold since February.

The wavered as UK Prime Minister Theresa May struggles to garner support around her Brexit proposal ahead of a critical vote in the House of Commons on Tuesday.

U.S. equities retreated slightly on Friday, stalling the post-Christmas rally. were the exception, outperforming when they should have lagged as the anti-trade resolution proxy. In another unusual occurrence, market structure was all over the place, with sector performance going off the rails. It’s interesting to note the renminbi bottomed with the start of trade talks. 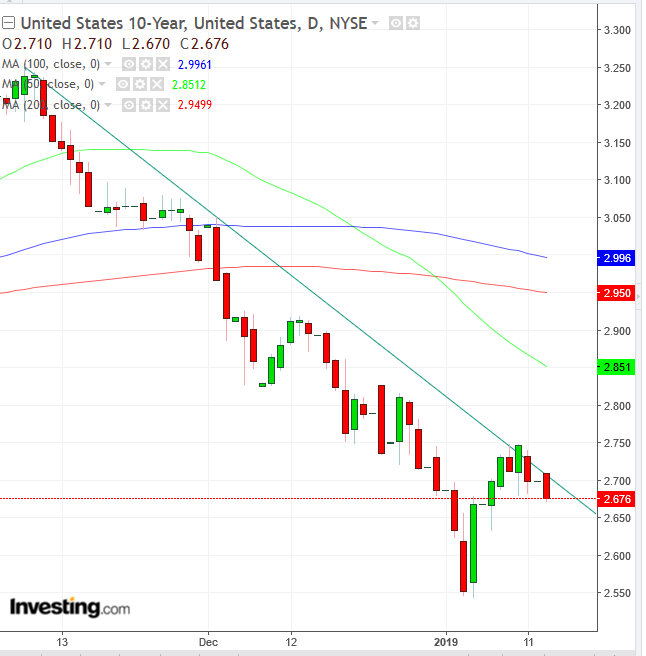 Treasurys climbed for a second day, as traders shifted from risk to safety. Technically, the yield on bonds tested the downtrend line since November 7—for the third time in as many sessions—when it had reached 3.25 percent, the highest rate since May 2011. After the recent Death Cross, it seems that bears are not giving up. Yields have reached their lowest levels in a week.

Slipping yields also dragged the lower, ending a two-day rally. Technically, the greenback completed a return move after topping out, as Friday’s price peaked over the neckline but closed below it. Today, again, it attempted to rise but was pushed back below the neckline.

The next test for the downtrend is the 200 DMA, just below the psychological 95.00 level. Overall, the DXY might be forming a rising flag, bearish in a downtrend, which could could be just what it needs to overcome the support of the 200 DMA. 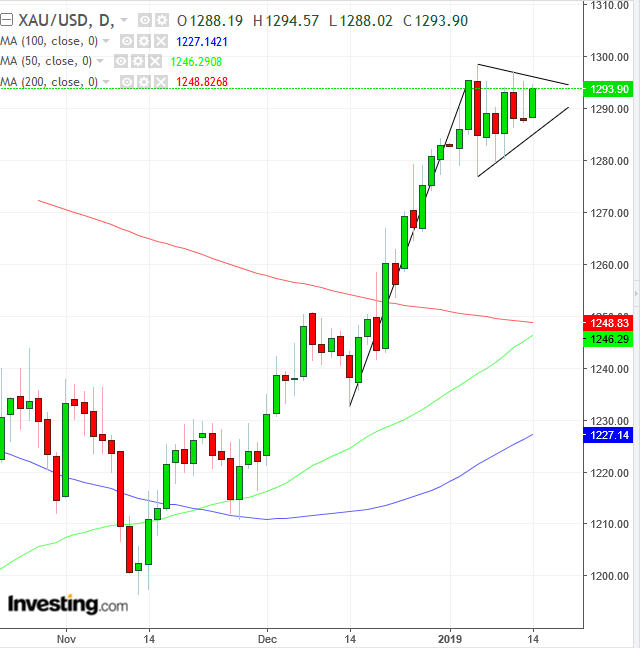 The and , two key safe haven assets, gained ground. The latter reached near a two-week high as it tested the top of a continuation pennant pattern. 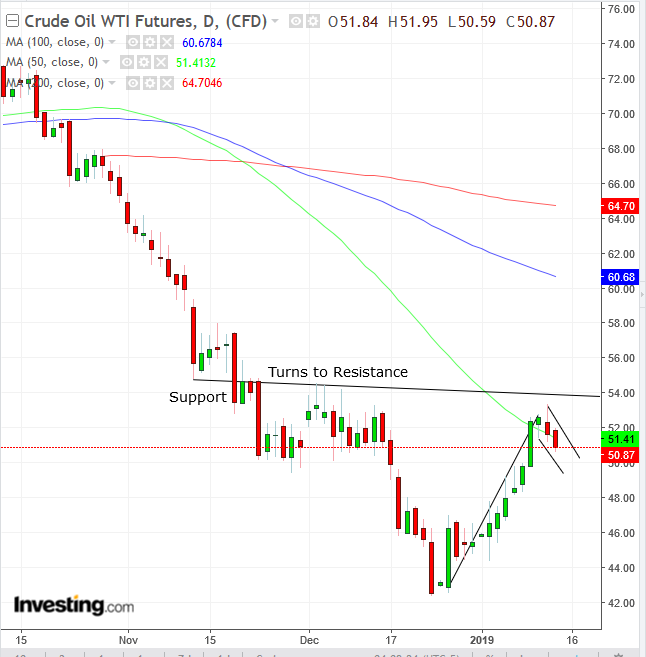 By spurring classic risk-off sentiment, China’s disappointing trade data also pushed prices lower. Technically, the price confirmed the resistance level at the $54 level, with some seeing the path of least resistance higher, aided by the 50 DMA, where bears and bulls have remained since mid November. However, WTI’s recent 9-day winning streak—the longest in 9 years—is the classic setup for a falling flag, which it appears to be developing, bullish in an uptrend. Should it complete it with an upside breakout, it might also complete an H&S bottom.

Overall, the post-Christmas exuberance brought on by the upbeat , a by the Fed and a surprisingly quiet U.S. President amid U.S.-Sino negotiations, is showing signs of ebbing. China’s weak trade data isn’t helping ease investor worries, nor is the ongoing deadlock between Donald Trump and Democrats over what is now the longest U.S. government shutdown in history. Perhaps, however, this rally was just the last flicker of a candle that is about to die out, as argued above.