US futures on the , , and were falling on Thursday, along with global stocks, the result of increasing concerns about the spread of the Delta variant of COVID-19. Treasuries are plummeting due as worries about a slower economic recovery than originally anticipated gain traction.

With the global death toll from coronavirus topping 4 million according to John Hopkins University figures, the emergence of the Delta variant is seeing some countries struggle to contain further infections.

All four US futures contracts were significantly in the red today, with the reflation related benchmarks underperforming. Contracts on the Russell 2000—which includes stocks of domestic US companies that are expected to outperform in an economic recovery and provided the greatest value as they underperformed during coronavirus lockdowns—suffered the greatest loss, down 1.5%. That’s almost double the decline of NASDAQ 100 futures, whose listed equities benefited from last year’s social restrictions.

With a 1.00% loss, contracts on the —whose blue-chip, megcaps are also sensitive to economic cycles—was the second-worst performer.

European stocks sold off with cyclical sectors, including miners, automakers and banks. The Index opened lower and extended its fall to 1.3%. 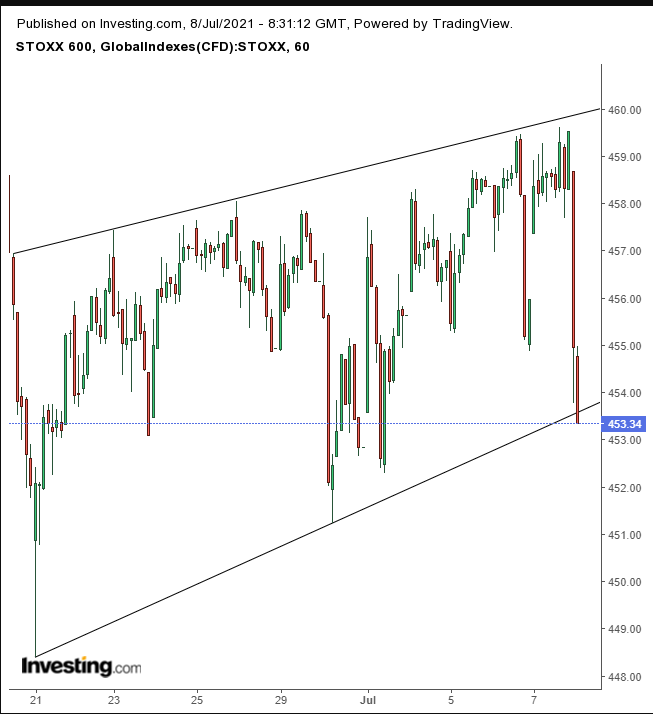 The index peaked below the bottom of a rising channel since June 18, testing demand.

Focus today is on the ECB’s concerning the results of an 18-month strategy review regarding redefining its inflation target and clarifying its role on climate change. Meanwhile, the minutes from the central bank meeting released ahead of the US open, indicated that members plan to continue the generous monetary accommodations. Policymakers have also agreed to increase inflation goals to 2% and even to let it go past that mark in a move that is in line with the US Federal Reserve’s policy.

Meanwhile, after awaiting for the from the Fed’s monetary policy meeting all week as a potential catalyst for markets, yesterday’s release has failed to dominate market chatter, which is solely focused on the ongoing spread of the Delta variant of COVID-19 and the possibility of additional lockdowns.

The Asia-Pacific region has seen a spike in cases of the Delta variant, threatening another wave and prompting new restrictions.

Japan announced the country’s state of emergency will continue throughout the Olympics, which run from July 23 to Aug. 8, in an effort to avoid a more widespread global contagion. This increases the likelihood that there will be no spectators at the games as overseas fans have already been banned.

Australia, which successfully hosted international cricket matches and tennis tournaments last year, has said it will keep its borders shut because after a two week lockdown in Sydney, its largest city, the state of New South Wales recorded its worst daily number of COVID-19 infections this year. South Korea is considering a lockdown in Seoul as it posted a record of number of cases. And Thailand posted its lowest every figures, as the country considers increased restrictions, including additional curbs on travel.

US investor concerns also have been raised by the news that the Delta strain is already the dominant variant there.

On Wednesday, stocks on Wall Street managed to rebound from an early plunge below Tuesday’s close. They even succeeded in eking out a gain by the close as the Fed minutes showed that US policymakers debated the timeline for tapering its massive debt purchasing program which has been pumping cheap money into the economy to fuel what has been expected to be a powerful recovery but is now looking uncertain amid the worsening global health crisis.

The Index rose 0.34% yesterday, slightly outperforming the ’s 0.3% advance. The climbed only 0.16%, and the had an even weaker showing, +0.02%. Still it was enough for the NASDAQ indices to join the S&P in extending record highs and closes.

It seems that investors were willing to increase their risk exposures as the indecision at the Fed may help to ensure that the current Goldilocks environment, in which the economy is not rising too fast nor too slowly, but is just right, is maintained

It was gutsy of traders to increase equity positioning, even as yields, including for the Treasury note, kept dropping in a straight line. 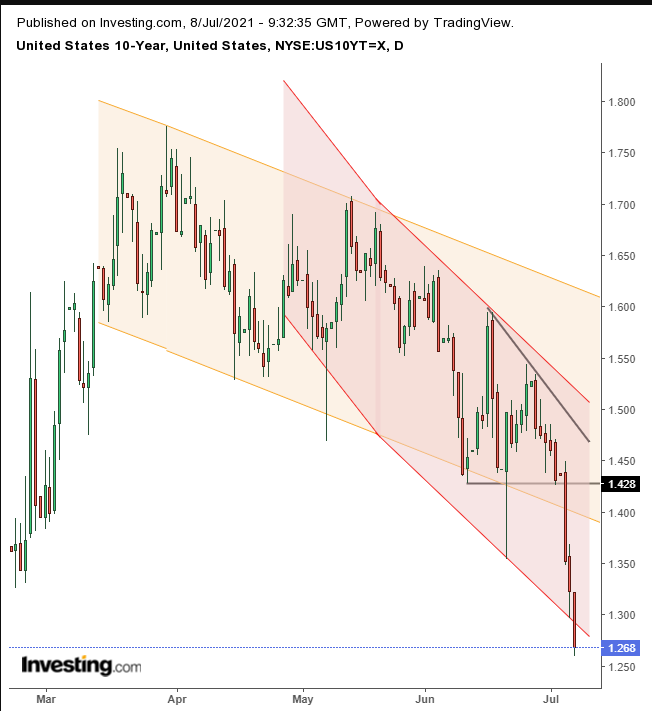 Treasury yields fell today as well, for the eighth straight day, which is a worse performance than the longest drop in the pandemic—7 sessions in a row in February 2020, before the market bottomed.

This buying frenzy may show that fears of the effect of the spread of the coronavirus are overshadowing the shift by the Fed to begin reducing its overly bloated balance sheet, which should have triggered a Treasury selloff—both because risk assets would provide far superior returns and traders would want to cash out of current, lower yielding bonds in favor of future higher ones.

We can also see this in the disconnect between the longest winning streak for in years, while and are ranging. If gold’s surge is due to its inflationary hedging property, silver and copper should have risen in tandem. 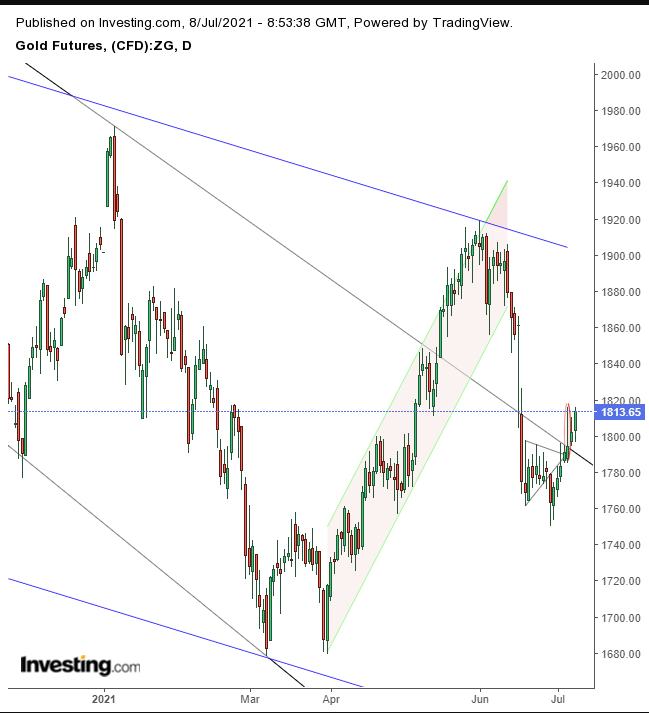 The yellow metal is rising for the seventh straight session, testing Tuesday’s shooting star, whose bearish posture is proportionate to its exceptionally long upper shadow and is tracking how far down bears manage to push back bulls. Working against the bears, however, are the milestones bears captured, the expectant bearish pennant and the top of its former falling channel sine the 2020 record high.

As opposed to gold, silver just rebounded from a four-day selloff. 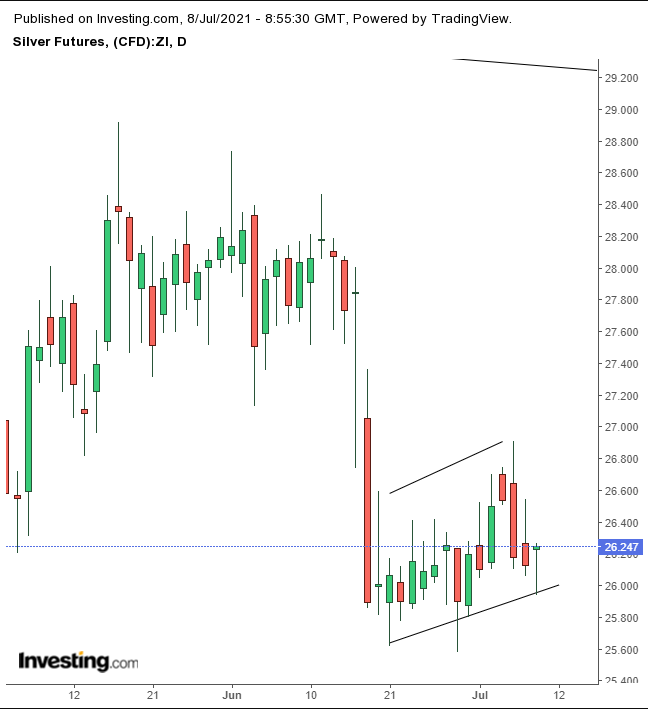 The reason for today’s comeback could be technical, as the precious metal tested the bottom of a potential rising flag, bearish after the preceding sharp drop. 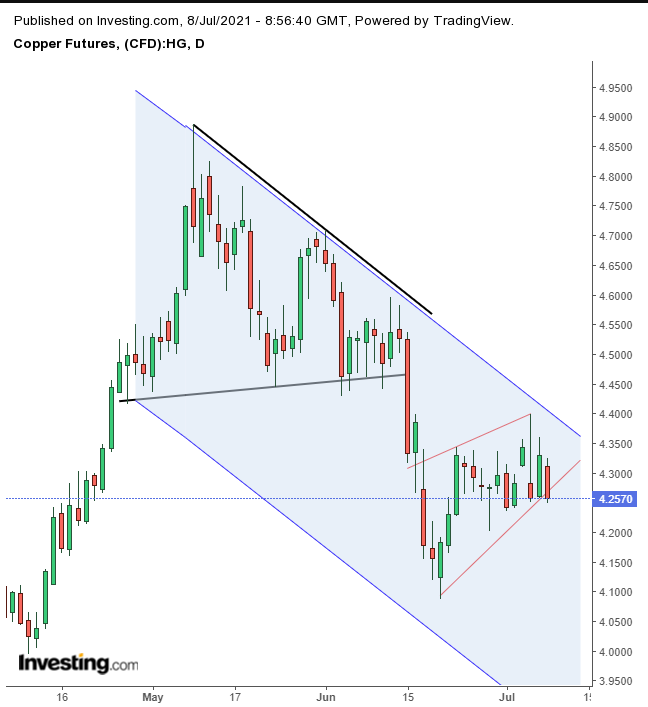 The red metal is threatening to complete its own rising flag, especially bearish following a top and as it meets the resistance of its falling channel. 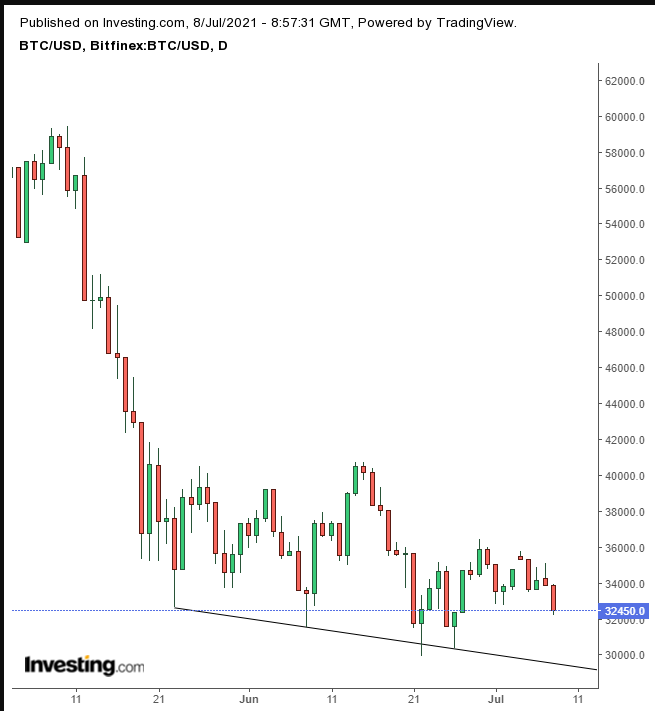 Perhaps the cryptocurrency is on its way to complete a H&S continuation pattern.

extended a decline, as traders await clarity about OPEC’s plan to increase production from pandemic-levels, as well as concerns that new social restrictions may dent global demand. 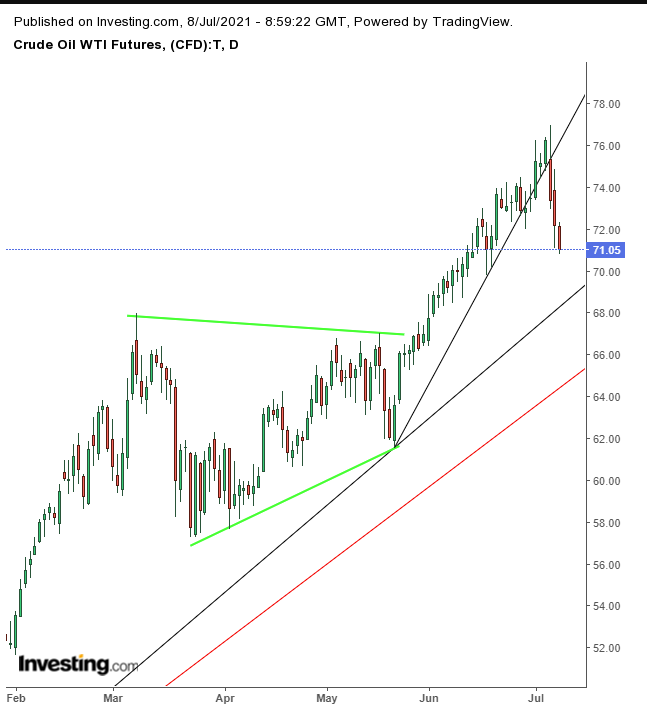 The price fell for the third straight day, for the first time since May, falling below its most recent uptrend line.