European and Asian stocks traded broadly higher on Monday ahead of a trifecta of interest rate decisions later this week from the US , the and the .

The gained ground for the first time in five sessions, while US futures on the , and were flat in early European trade, after trimming earlier losses.

This morning, during Asian trade, indices excluding China’s and Australia’s inched higher after bouncing back from a weak open, as investors managed to shrug off trade worries even after this weekend’s G7 summit headlines indicated some disastrous diplomatic faux pas had occurred.

Financial networks reported that, going into the new week, investors would focus squarely on the historic US-North Korea summit in Singapore, scheduled for June 12, aimed at shutting down North Korea’s nuclear program. However, we believe investors are actually honing in on economic data instead, and will keep bidding up stocks for as long as they see hard evidence of expanding growth in the US. 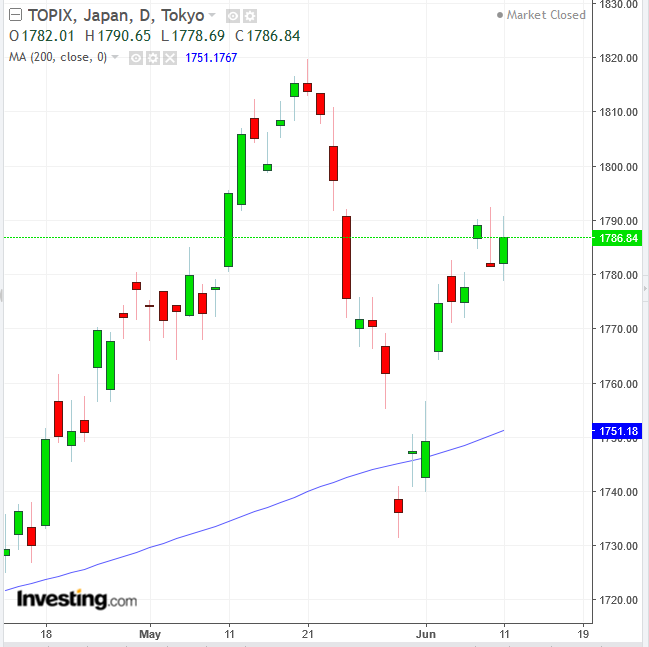 Japan’s gained 0.35 percent, rebounding from a 0.15 percent decline. However, it also failed to hold on to an earlier, more than 0.5 percent rise, as it retreated from the day’s highs after testing the resistance of Friday’s shooting star, when it had rallied 3.5 percent above the May 30 bottom.

Chinese shares listed on the underperformed regional peers, losing 0.65 percent and suffering an aggregate three-day plunge of 2.25 percent. Technically, the mainland index is retesting the 3,000 psychological level, which, since January 2017, has been a launching pad for buy orders.

Hong Kong’s shifted from a 0.3 percent decline to a 0.55 percent advance. Technically, the benchmark index is retesting the top of a consolidation since February, which was confirmed on Friday when losses wiped out three days of gains.

South Korea’s bounced off its 0.15 opening slide to finish the day ahead 0.75 percent, outperforming among the region’s indices. Technically, it bounced off the 200 DMA but is facing a presumed supply ambush at the 2,480 level, where Thursday’s shooting star confirmed a resistance that’s been in place since mid-May.

The biggest result from the G7 meeting that took place in Quebec on Friday and Saturday—which saw US President Donald Trump refuse to sign a joint statement with European allies and Canada, as well as attack Canada’s Prime Minister Justin Trudeau for being “meek and mild” and making “false statements”— appears to be that, at least for now, investors are not overly shaken by Trump’s heightened diplomatic misbehavior, which it seems they had already priced in.

Conversely, the way the media chose to characterize another populist political leader provides an apt comparison for how strongly contentious Trump’s actions and tweets were perceived to be by other G7 members. A Reuters article, “Italy’s anti-elite prime minister plays by rules at the G7 club” paints that country’s new Prime Minister, Giuseppe Conte, as “low-key” and “moderate,” “willing to show pro-European credentials” at the summit—an approach that contrasts sharply with his more populist, euroskeptic election platform.

Conte did however stir up some controversy when he backed Trump’s call to re-admit Russia to the G7, after the country was expelled in 2014 following its forecful annexation of Crimea from Ukraine. 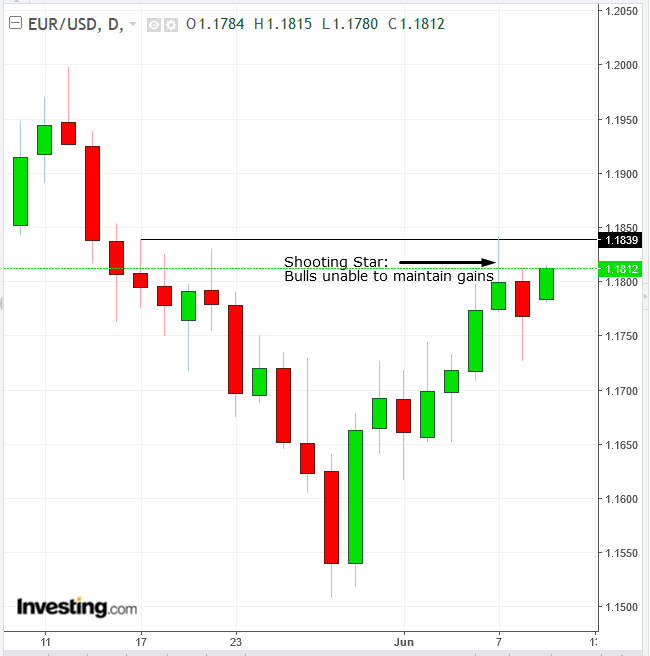 Fresh reassurance from Italy’s new finance minister, on Sunday, that an exit from the single currency bloc is not on the cards has further boosted the , which rallied last week on signals that the ECB would be laying out details of its QE tapering plans later this week. Technically, traders are retesting the 1.1840 level, where supply has been holding the line since mid-May, confirmed by Friday’s shooting star, where bulls were unable to maintain the highs of the session.

On the other side of the Atlantic, fears that Trump would scrap NAFTA agreements sent the 0.3 percent lower. 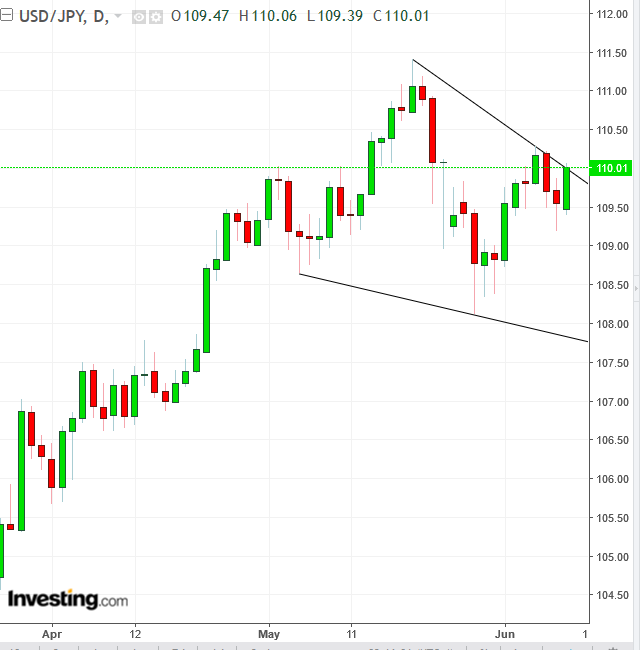 And the also fell out of favor on reduced geopolitical risk, ahead of US-NK talks. Technically, the USD/JPY pair is testing the downtrend line since May 21, reinforced by the Bearish Engulfing Pattern it posted on Wednesday and Thursday.

The price of slipped lower on a stronger reading of the Baker Hughes , which showed on Friday that drilling activity in the US hit its highest level in more than three years. The positive report offset news that Russia boosted production in the first week of June, exceeding supply limits that had been internationally agreed upon. 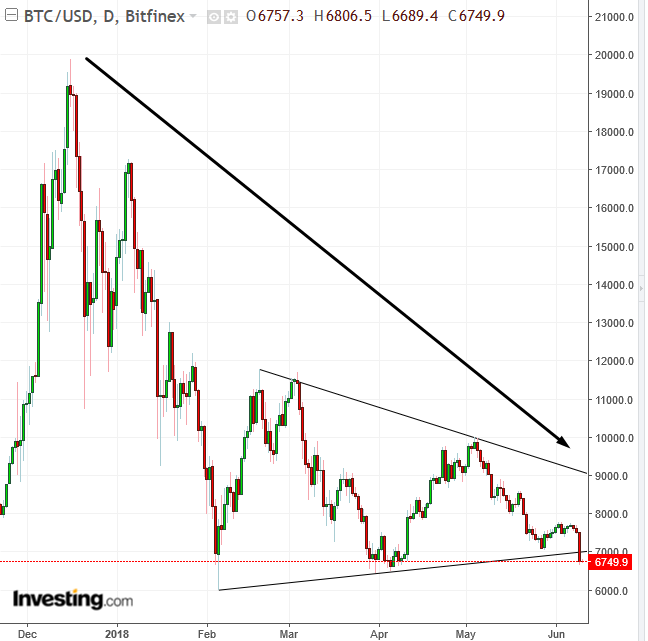 fell to a two month low, after South Korea’s cryptocurrency exchange Conrail reported this weekend that it had been hacked, raising concerns around security standards at small- to mid-sized virtual currency exchanges. Technically, the digital currency is testing the February, $6,000 low, as it pierced the bottom of a symmetrical triangle, expected to be bearish in a downtrend. Indeed, the cryptocurrency could be headed lower still.