European shares on the and futures on the , and enjoyed a favorable reversal this morning, as signs of a possible breakthrough on the month-long partial U.S. government shutdown—the longest in the country’s history—offset trade-related headwinds.

U.S. Senate Majority Leader Mitch McConnell scheduled a vote for Thursday on a Republican-backed proposal to reopen the government. Should it not pass, lawmakers will then vote on a competing proposal, tabled by the Democrats—with investors hoping to see a swift end to the ongoing political stalemate.

In the early global open, equities had been dragged lower by reports that the U.S. rejected Chinese proposals for preparatory talks ahead of official negotiations next week. Despite the fact that the White House’s chief economic adviser Larry Kudlow denied those reports, investors—already disheartened by the alleged lack of progress on technology copyright laws, which is perhaps the thorniest issue within the trade war—had remained unconvinced. 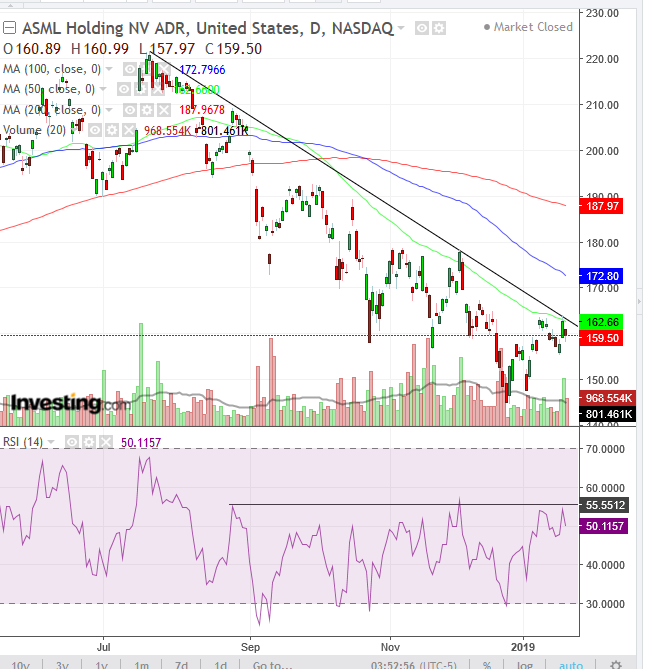 In Europe, from ASML Holding (AS:), the region’s largest semiconductor gear-marker, had also pushed prices lower. The company forecast sales below analyst estimates, most likely exacerbating fears stemming from one of last quarter’s key market headwinds: soft guidance. Technically, the price fell after the stock hit the 50 DMA and downtrend line since June 23. The three major MAs—50, 100 and 200—are in bearish formation, highlighting a dynamic whereby the more recent the prices are, the weaker they seem. However, the RSI, a leading indicator, is providing a positive divergence, as it tests the momentum highs since August, while the price is 23 percent lower. Also, volumes in the positive sessions have been significantly higher than in the negative sessions since the pre-Christmas bottom.

Adding to negative headlines, the U.S. Federal Reserve is said to be investigating how Deutsche Bank (DE:) handled billions of dollars in suspicious transactions from Denmark’s Danske Bank (CO:), raising the specter of a money-laundering scandal.

China’s gave up earlier gains, but, remarkably, still managed to close 0.05 percent in the green. Stimulus measures from the government seemed to have a greater impact on traders’ mood than vague, ever-lasting discussions around U.S.-China talks.

In FX trading, the slipped after the Bank of Japan inflation outlook.

In Tuesday’s U.S. session, equities dropped the most sharply in nearly three weeks on mounting concerns that the U.S.-China trade dispute will not be settled as easily as recently hoped. Multinational companies, which rely on the Chinese market for sustained growth, and technology firms, which rely on mutual copyrights protection rules, led the declines. 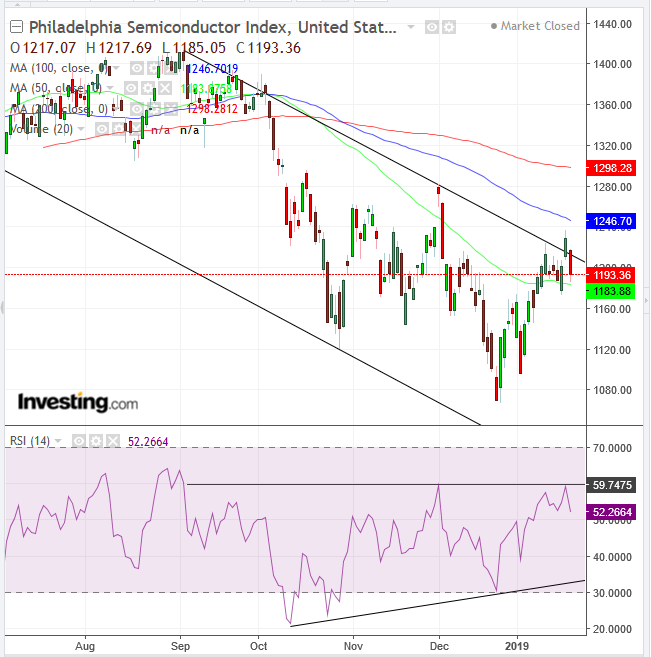 Chipmakers were hit the hardest, with the losing an aggregate 2.85 percent, with every member in the red. Technically, the chart of the index resembles closely that of ASML, reaching its downtrend line and its RSI retesting its highest level since September. The technical picture, however, is stronger, as the index pierced through its 50 DMA and managed to stay above it. Also, its RSI posted a higher trough, providing a negative divergence to the price’s lower trough. 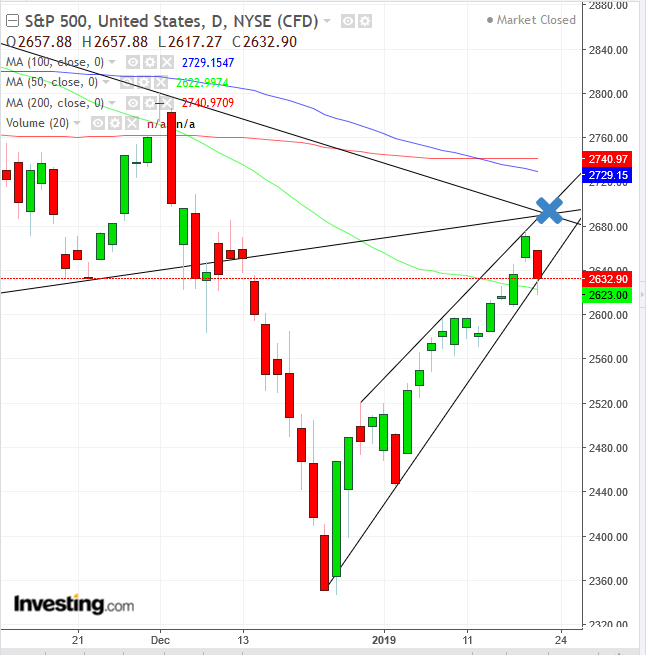 The suffered a 1.42 percent setback. Technically, the index’s worst drop in weeks took place at the intersection of the downtrend line since the September record peak and the consolidation bottom, at the 2,700 levels, which has been our critical test since the post-Christmas comeback.

The shed over 300 points but still fared better than the other U.S. majors, giving up 1.22 percent. Caterpillar (NYSE:) and DowDuPont Inc (NYSE:) led the Dow’s slide.

The slid 1.85 percent, once more confirming a breakdown of the usual market structure, as small caps—which don’t rely on exports for continued growth—should have outperformed amid heightened pessimism around a forthcoming trade deal.

Still, the , whose listed firms stand at the core of the trade dispute, tumbled 1.91 percent. 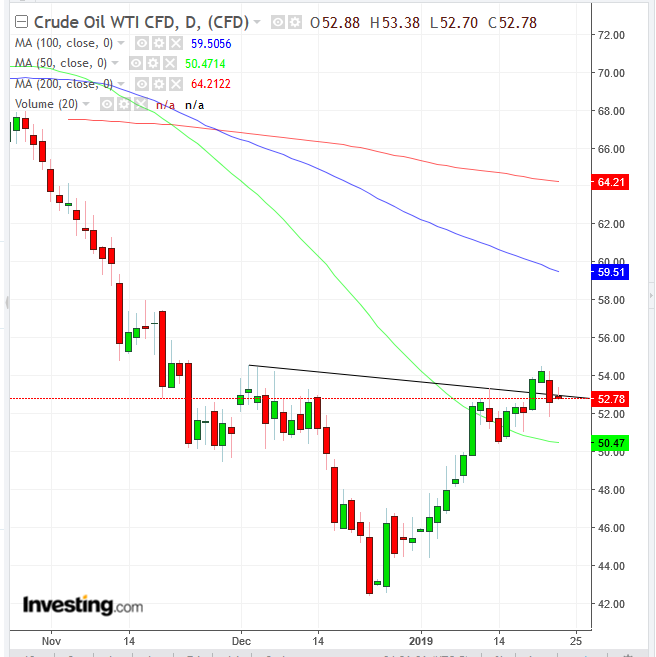 WTI crude pared some of yesterday’s losses, which saw prices retreating from a near two-month high. Note that the bull-bear struggle takes place right on the neckline of a potential H&S bottom.

Investors once again find themselves juggling between opposing forces—as well as inconsistent news reports. On the tailwind front, hopes of a near resolution of the US government shutdown added to Chinese policymakers’ efforts to aid the country’s stumbling economy and to generally upbeat earnings reports from major U.S. banks, compounded by strong guidance—which represents a key development crucial after last quarter’s broad cut in sales outlook. IBM (NYSE:) added to the trend, that topped estimates and boosted the stock after market close.

Meanwhile, on the headwinds front, the Brexit saga and all its related risks continue to loom in the background, while billionaire investor Ray Dalio chastised monetary policy makers at the World Economic Forum in Davos for an “inappropriate desire” to tighten faster than the capital markets could handle.