Investor cashed out of futures on the , , and as well as European stocks on Monday as inflation worries resurfaced amid concerns about an uneven global recovery.

The dollar continued to move higher while gold slipped.

Today’s market narrative demonstrates the fickle nature of markets. On Friday, US stocks posted fresh records because traders were no longer concerned about inflation after a fresh dose of Fed coaxing, but were instead—due to the explicit direction of Federal Reserve Chair Jerome Powell—focusing on robust US economic growth.

However, after the weekend, traders are nervous that there will be a lopsided economic recovery, since richer countries have received the lion’s share of vaccines which the World Health Organization has said is a “shocking imbalance.” More than three quarters of the half a billion vaccines that have been administered thus far have been in the world’s richest countries. As well, they have more policy tools at their disposal to effectively stimulate their domestic economies.

To be clear, the idea that the global recovery will not be balanced is nothing new. But, an economic recovery could also bring inflation, and inflationary pressures may be exacerbated further if investors also reroute their capital to the countries with the fastest rate of recovery, thus putting additional upward pressure on prices. Despite investors’ concerns, we think the current uptrend is bullish until proven bearish.

On Monday, as all four US contracts were trading in the red, futures on the Russell 2000 were underperforming at almost three times the rate of NASDAQ contracts, showing that even in retreat, the reflation trade resumed its reversal.

This rotation back from value into growth was also seen in European shares this morning. The Index fell with banks and miners—two sectors that do well amid a recovery. In line with US futures, the retreat in European stocks followed three straight weeks of gains, including records.

Stocks have held a close negative correlation with Treasuries this year, including the note. 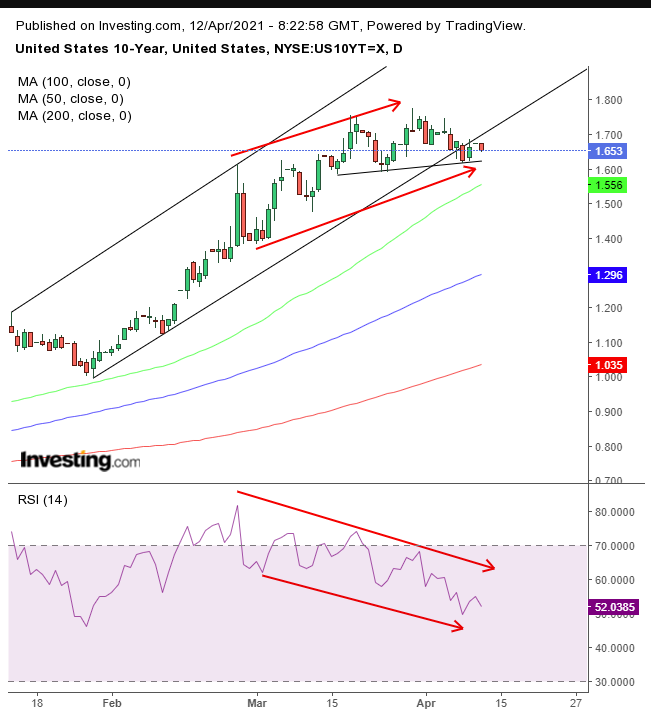 Sure enough, yields on Treasury notes were falling today, along a potential top.

The edged higher for the second day, bouncing off the extended neckline of a bottom and the lower edge of a rising channel, but found resistance by the 200 DMA. 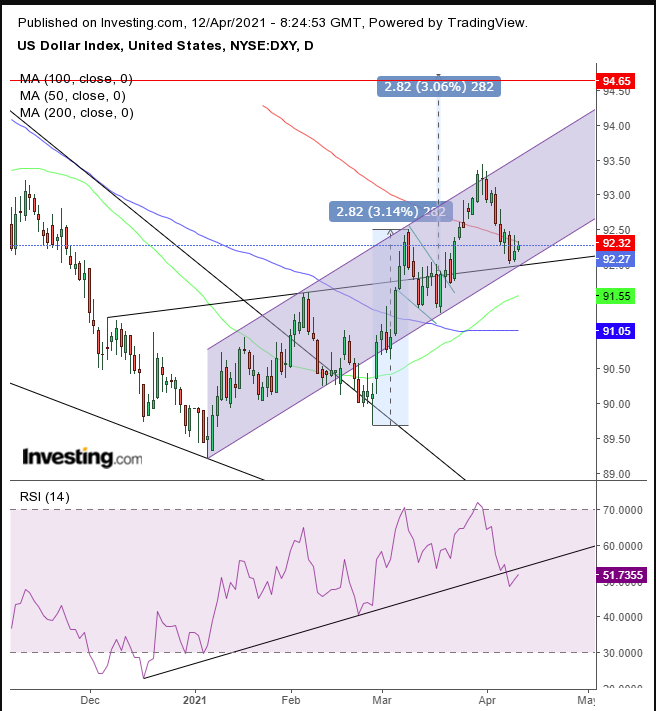 Traders will watch with interest whether the RSI can climb back above its uptrend line. We consider the retreat since Mar. 31 as a return move before a continued rally.

moved in the complete opposite direction of the dollar, testing its own flag. 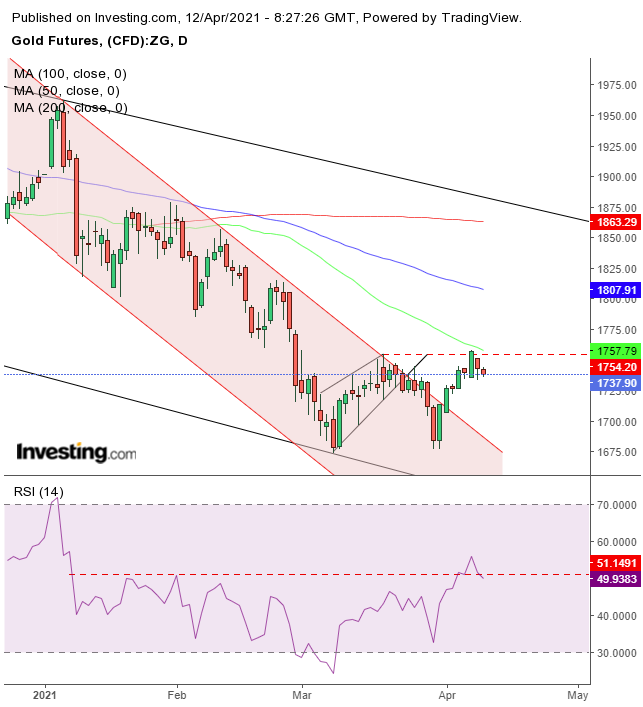 Its RSI already managed to return below its support, the mirror image of the dollar.

advanced for the fifth straight day—its longest since March—putting the cryptocurrency back above the $60,000 level, as it retests its Mar. 13 record close, at $61,207, which is only 0.75% higher. 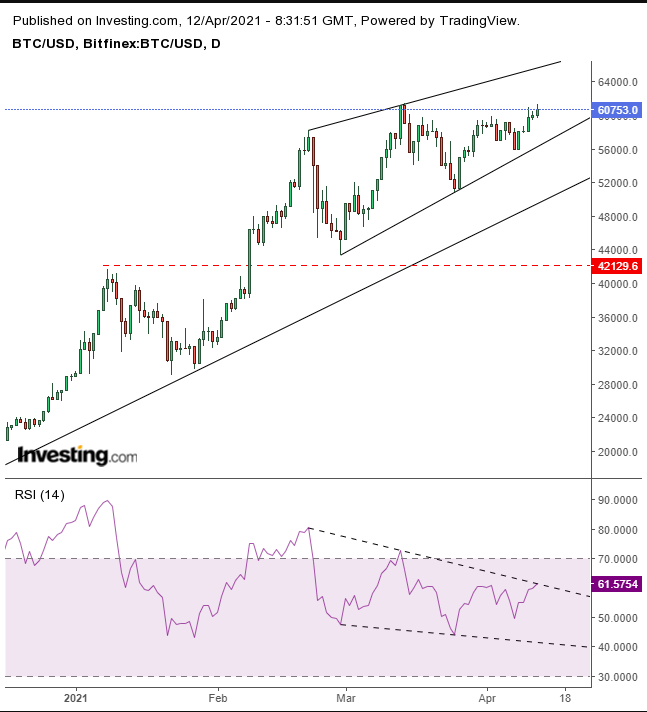 We are concerned however, of a negative divergence by the RSI, which has been developing a falling wedge in contrast to the price’s rising wedge. A topside breakout of the RSI would signal that momentum was picking up, increasing the odds we’re going to see a push into unfamiliar territory.

edged higher, having rebounded from an earlier slide, as investors weigh the rotation between value and growth and the risk that the virus may interfere with an economic recovery. There are also concerns among oil traders that oil demand could also be dented by President Joseph Biden’s green initiatives. 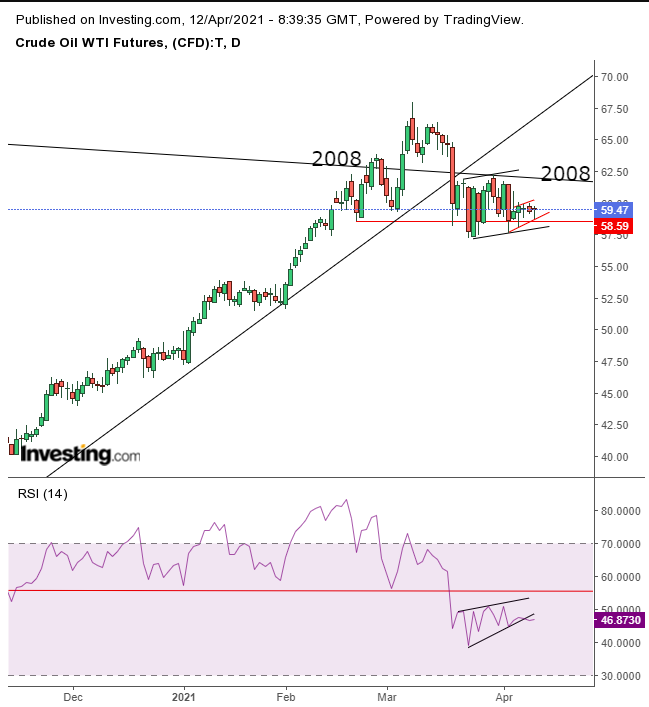 Meanwhile, today’s rebound didn’t help drive momentum upward. The RSI remained below its range, suggesting the same may happen to the price, which has been forming a smaller rising flag within the larger one, itself making up the right shoulder of a H&S bottom that bumped its head on the long-term downtrend line since the 2008 top.