European shares on the and futures on the , and firmed up this morning, though U.S. contracts struggled to cross neutral levels following a choppy Asian session. The short-term pattern seems to suggest that investor sentiment shifts overnight to improve partially at the start of the European session. Safe havens also provided a mixed picture, with Treasury yields initially paring losses but later slipping lower, the wavering and gaining ground.

Perhaps hopes around Wednesday’s U.S.-China trade talks are offsetting, at least for now, mounting worries on global economic growth. This latter element was underscored by a selloff in U.S. equities yesterday, after bellwether Caterpillar (NYSE:) blamed its disappointing on weaker Chinese demand, and NVIDIA (NASDAQ:) to $2.2 billion from $3.7 billion on “deteriorating macroeconomic conditions, particularly in China,” exacerbating the soft-guidance theme that upset markets at the end of 2018. After it roiled markets by cutting its forward outlook last quarter, Apple (NASDAQ:) is sure to monopolize investor attention with its fresh , which comes up after market close today. 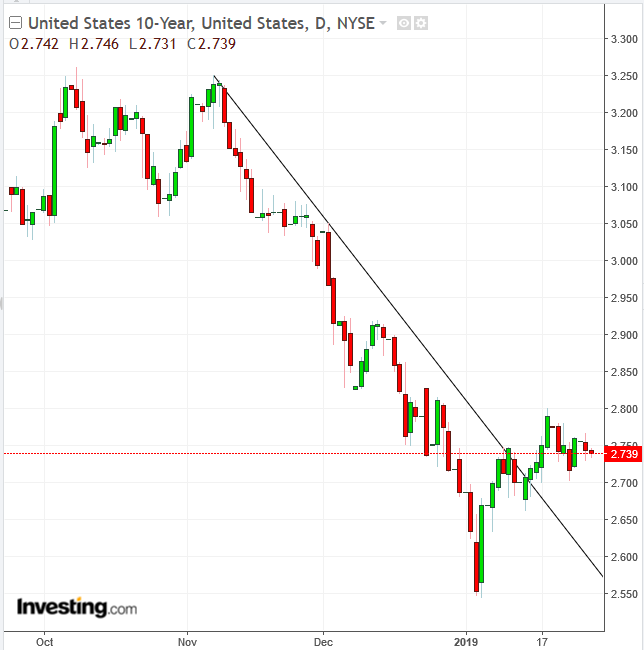 Meanwhile, the yield on 10-year bonds rebounded but closed lower for a second day, as traders tried to determine whether the new-year equity bounce marks just a correction or a reversal. 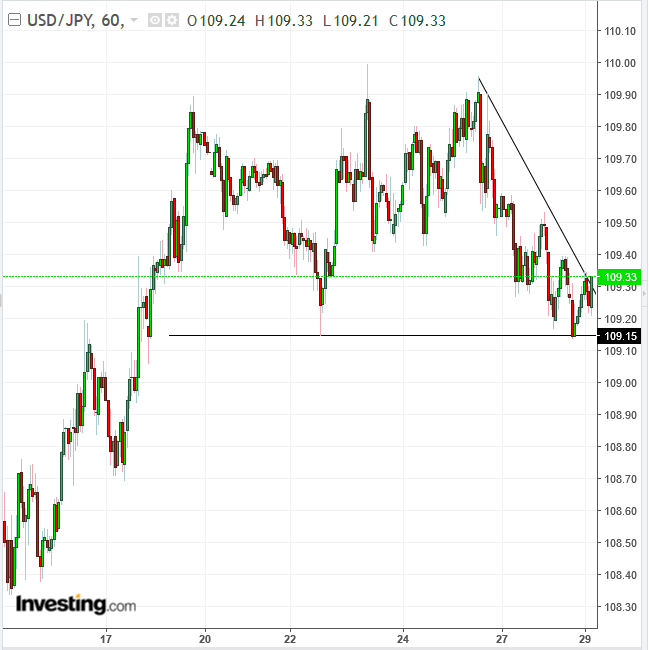 The yen was also struggling, between an upward push since Friday, from below the 110.00 level—a resistance since mid December—and the bottoming out pattern. In the USD/JPY chart, the dollar is struggling against its downtrend line since last Friday, thereby topping out. 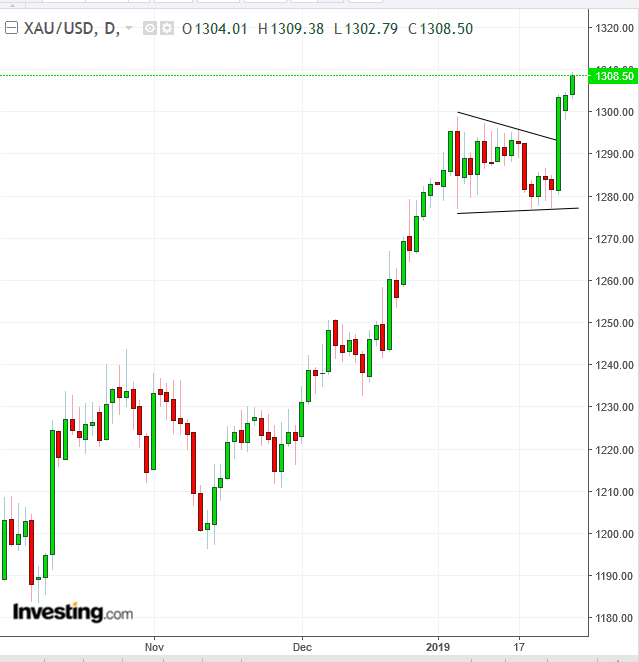 Gold was targeting the $1,309 level, extending the upside breakout of a continuation pennant pattern to reach the highest level since May. 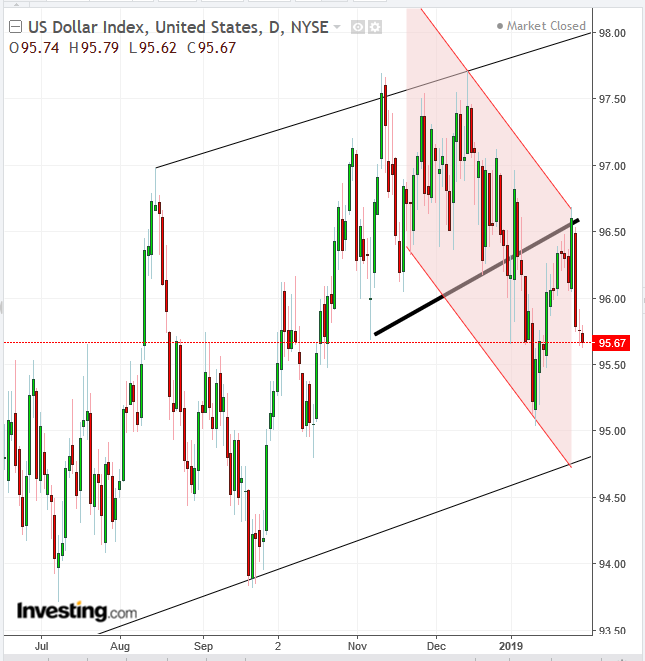 It’s noteworthy that the yellow metal is most likely benefiting from a weakening . After topping out in the short term, the greenback was on a collision course with the bottom of its medium-term trend, represented by the bottom of an ascending channel.

Why would the dollar fall ahead of a , which should shed more light on policymakers’ recent change of heart on a faster pace ? Perhaps, investors think the Fed’s about-face is not priced in, considering the recent selloff. Another possible driver is foreign demand for Treasurys, as global investors position themselves more cautiously amid growing fears of an impending recession. However, the dollar may have just slid lower on the technicals, as described above. Besides, it was rebounding slightly by the late European morning session. 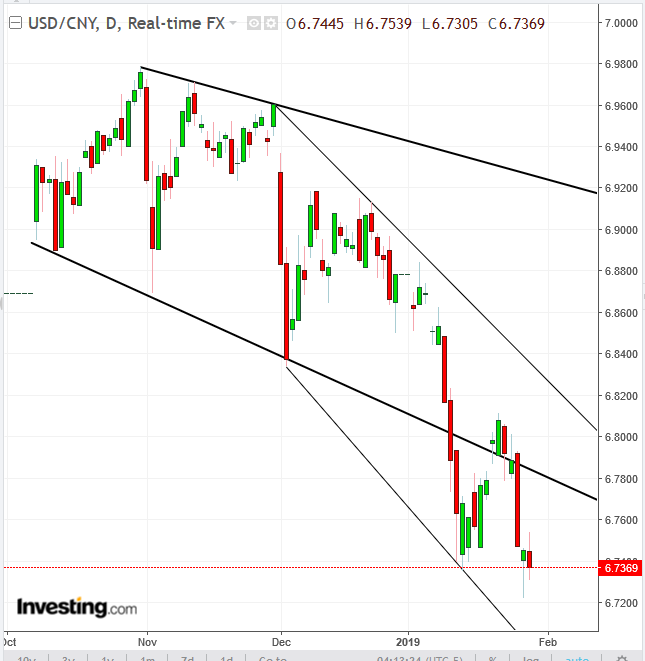 Meanwhile, the buck is also falling against the . Thus could come as a reaction to the U.S. announcing criminal charges against Chinese telecoms giant Huawei (SZ:), or, more probably, on the technicals, as the price retests yesterday’s low.

In the earlier Asian session, an indecisive market oscillated between growth concerns and trade hopes.

Japan’s rebounded from an intraday loss of over 1 percent, averting a two-day slide after it underperformed its peers yesterday.

South Korea’s outperformed as it gained 0.28 percent, boosted by a rush to IT stocks after Samsung (KS:) posted robust . The rose against the dollar, as much of the buying on the index was fueled by foreign investors.

China’s edged 0.1 percent lower and Hong Kong’s declined 0.16 percent, but it was Australia’s that lagged the most, dropping 0.53 percent on Chinese risk. The index was probably weighed down by U.S. charges against Huawei, which may have caught Chinese trade representatives—heading to Washington for a key round of trade talks—off-guard yesterday. We have often shown how Australian markets are more sensitive to Chinese headwinds than Chinese markets themselves. The country’s economy in fact relies heavily on demand from China, which represents its biggest trading partner.

In other news, stabilized even as the Trump administration hit Venezuela’s state-owned oil firm PDVSA with sanctions. Technically, the price of oil is struggling between bulls, who are attempting to bottom out the contract by pushing prices above $55 with a trend “revolution”, and bears, who are attempting to top it out, above the $50 levels. By late European morning, the price was seen more steadily in green territory.