A better-than-expected conclusion to the historic meeting between the US and North Korea underwhelmed global markets this morning, as investors proved to be more interested in a plethora of of key economic data due out this week as well as the upcoming interest rate decisions from the US , the and the ).

Should economic figures provide further confirmation of expanding growth in the US, after last week’s beat expectations, we can then expect to see additional equity rallies. For now, global shares are posting modest gains, US Treasury yields are crawling higher and the is also rising. reached its highest level of the month, as supply hikes from OPEC’s oil producing countries now seem less likely.

The pan-European stretched its advance to a second day, following a moderate rally across most Asian indices. However, US futures on the , and are hovering slightly below neutral levels at the time of writing, pointing to a less positive session ahead for US majors, after their upbeat performance on Monday. 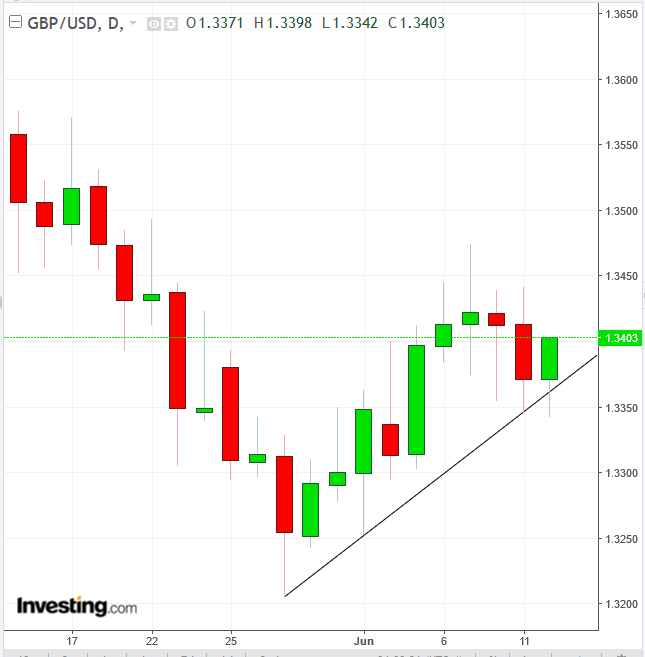 The was up 0.2 percent during early trade, defying mounting worries over the fate of the final Brexit bill that the UK government will be putting forward. With just a few hours left before a key two-day voting session kicks off at the House of Commons, Prime Minister Theresa May is making some last ditch attempts to seal a shared agreement with MPs over key areas of the Brexit deal. Technically, the pound found support by an uptrend line since May 29.

Earlier, during the Asian session, regional indices and the yen suffered heightened levels of volatility as investors waited with trepidation for the outcome of the landmark summit between US President Donald Trump and North Korea’s Supreme Leader Kim Jong Un. 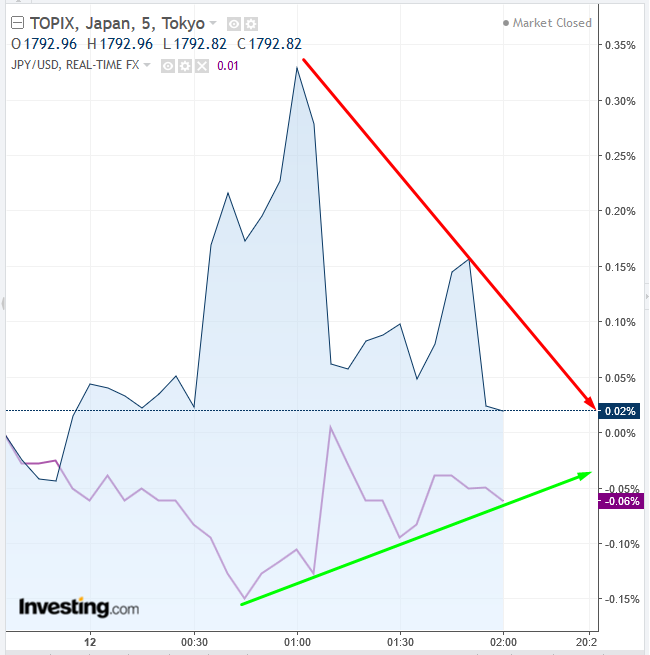 Ironically, just after the two leaders signed what appears to be a breakthrough deal for “complete denuclearization,” Japanese equities listed on the plunged. As well, Japan’s safe haven currency jumped after news of the Trump-Kim deal broke. The upward move reversed the 0.8 percent drop the yen posted on Monday, which marked its biggest slump since late April as investors yesterday rotated into riskier assets on renewed market confidence.

While a stronger yen weighs on stocks of domestic companies, given their broad reliance on exports, and thereby explains the mediocre performance of the TOPIX, it remains unclear why the yen would rise at this particular juncture. The TOPIX ended the day 0.35 percent higher, giving up half of its earlier gains. Technically, the price closed flat with Friday’s shooting-star’s high price and is therefore not past its presumed resistance. 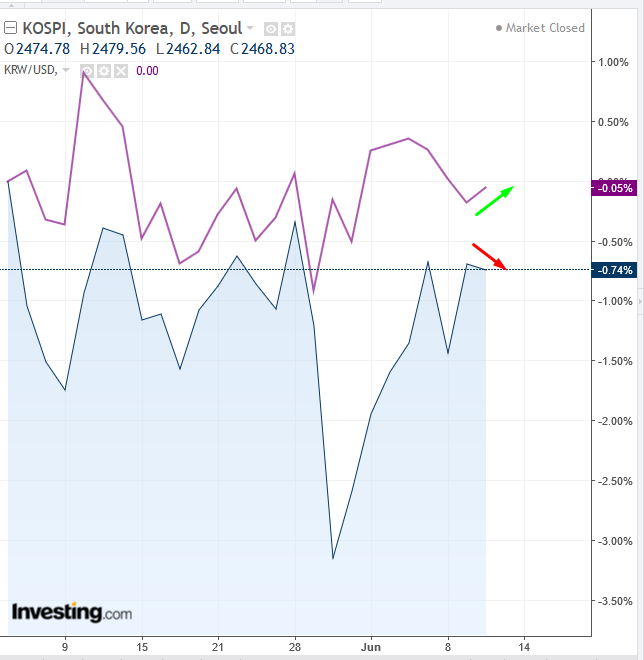 Another apparent anomaly is the decline seen on South Korea’s . One would expect the positive summit result would have boosted shares of North Korea’s southern neighbor. Perhaps, a strengthening of the on the expected economic benefits of a denuclearized Korean peninsula weighed on the South Korean equities.

It’s surprising that the upbeat Singapore summit failed to buoy these markets, especially as it follows a disastrous G7 meeting this past weekend. However, it’s possible that without specific details on what each side’s commitments actually are, investors simply aren’t yet convinced of the deal’s efficacy.

On the other hand, Chinese shares on the leaped 0.9 percent, closing at the high of the session after confirming a support above the 3,000-price level since February. Hong Kong’s advanced a modest 0.2 percent, after posting highly volatile trading within a full percentage point range.

Barring any shock outcome, we didn’t expect an exceptional market reaction to the US-NK summit, but the mere mention of “complete denuclearization” should have, in our view, infused additional confidence into markets for a much more substantial impact on global trade. Perhaps, after more clarity on the agreement, market response will shift. This morning’s reaction underscores the tendency among investors to focus more on economic events than geopolitical developments. 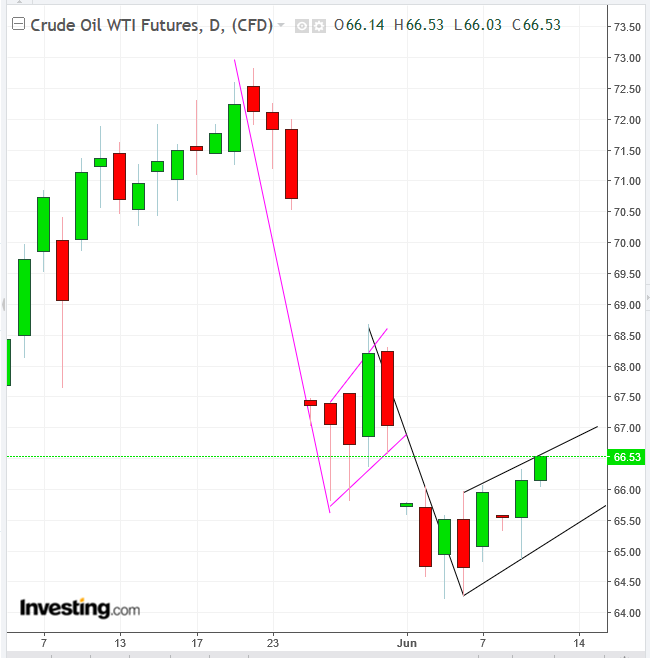 WTI crude crossed the halfway point of the $66 price level after OPEC’s president Suhail Al Mazrouei denied reports that the US asked the international cartel to increase oil production. Technically, bulls are testing the upper boundary of a second, consecutive bearish rising flag. Short-term technical traders may consider this a selling opportunity. An upside breakout, probably above $67 would invalidate the pattern.

The Fed is expected to hike interest rates tomorrow, though altered forward guidance could hinge on a single vote; on the other hand traders believe the ECB will strike a hawkish tone on Thursday, therefore favoring the against the dollar.

Meanwhile, broad expectations of a Fed hike are pushing emerging market currencies lower, led again by losses for the and the . A higher rate generally motivates investors to shift cash away EM currencies toward -denominated assets.

Adding to the interest rate discussion: today’s may raise bets over a this year.