Yesterday’s technology stock dump on Wall Street went viral on Tuesday,  sweeping across the globe in pre-US open trading this morning. Inflation concerns are at the center of the sell-off. Futures on the , , and have all slumped.

The dollar continues to struggle and Bitcoin continues falling.

Contracts on the NASDAQ and Russell—both sides of the reflation trade—slipped the most, while stocks less connected to the cyclical rotation are faring better, with S&P 500 futures down just 0.8% and futures on the Dow Jones Industrial Average, which includes reliable blue chip stocks, are outperforming, receding only 0.5%.

In Europe, the index and the UK’s each plunged over 2%, after both indices scored fresh all-time high records in trading on Monday. The two benchmarks have also suffered their worst slump in three weeks. Indeed, their charts have developed similar patterns, but the pan-European gauge was further along. 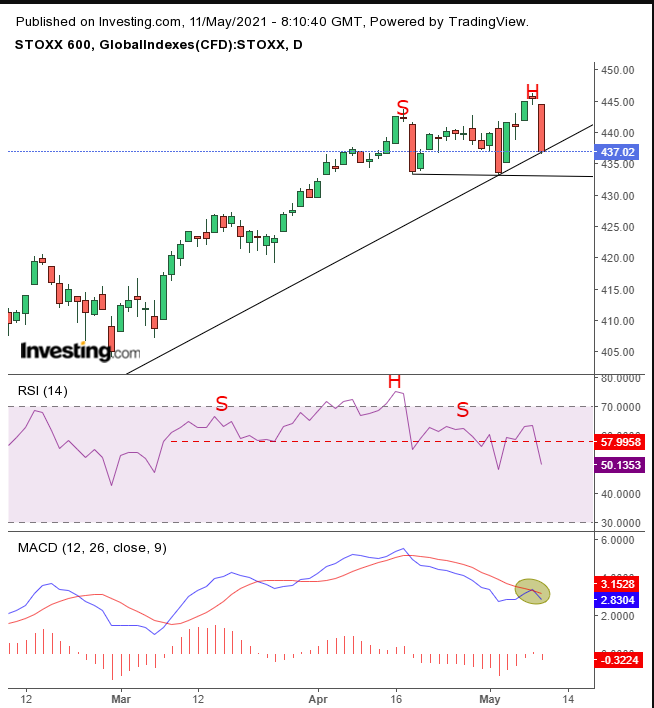 The STOXX 600 found support above its uptrend line, though it may be trading along a H&S top. The MACD confirmed its sell signal, and the RSI suggested that the price is set to complete a top.

Earlier in Asia, the index fell the most since March. Japan’s shed 3% of its value, and stocks listed on Hong Kong’s dipped 2%.

China’s , though, rose 0.4%, after China reported a 6.8% jump, up from a 4.4% increase YoY, in the , its strongest increase on that metric since October 2017, as supply constraints cascaded into manufacturing. China’s economy was the first to recover from the coronavirus pandemic and the central bank there, the People’s Bank of China, has been adjusting policies to keep inflation in check.

US stocks slumped on Monday with technology stocks weighing on all indices. Surging commodity prices have heightened inflation anxiety and investors are now asking two US-focused questions that for now remain unanswered:

The fell 2.6%. Among the biggest losers: Apple (NASDAQ:) which also slid 2.6% and Tesla (NASDAQ:) which crashed, dropping 6.4%. The recent inflation scare is testing our bullish call on Tesla. 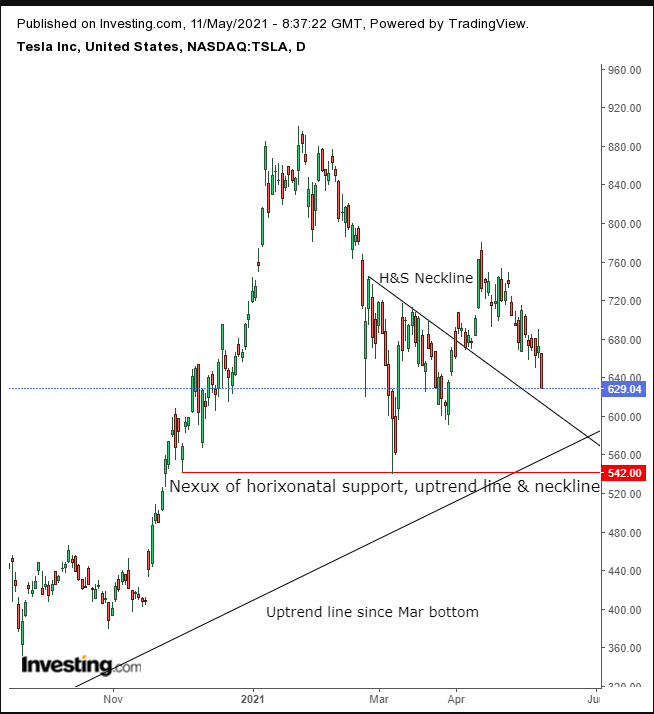 The real check for shares of the electric vehicle maker will be at $542.

The topped 35,000 for the first time, but produced a powerfully bearish shooting star which found resistance by the previous, steeper uptrend line, suggesting a retest of the pennant and the main uptrend line. 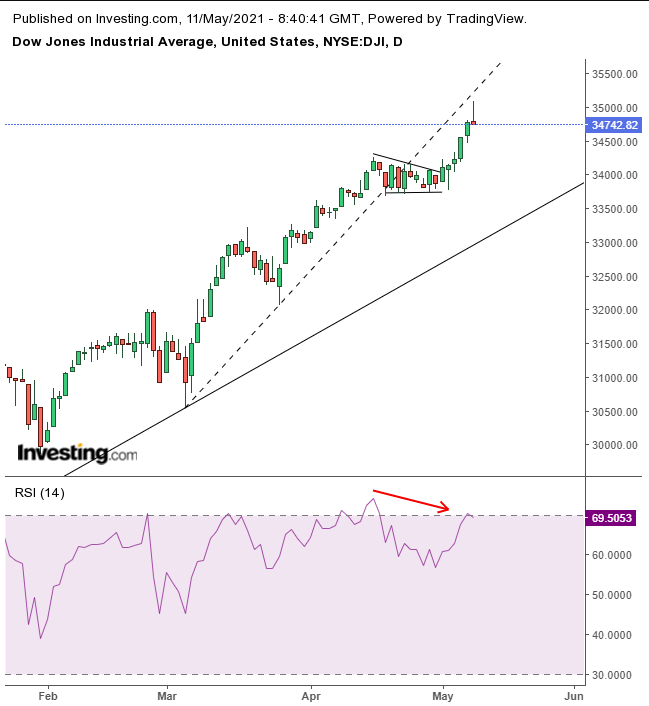 The RSI provides a negative divergence.

Yields, including on the Treasury note, rose for the fourth straight day, but unlike the previous time the benchmark bond advance, this time stocks are falling.

The continues to struggle. 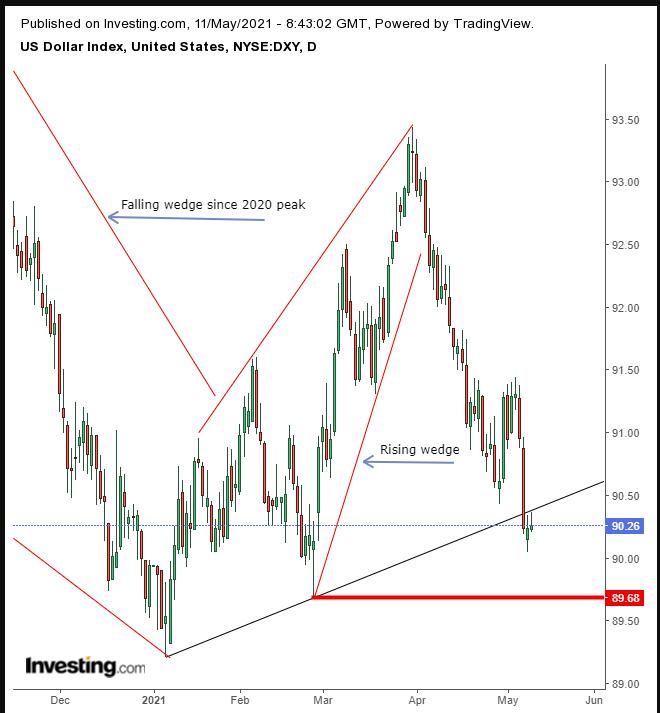 The greenback was unable to climb back above its uptrend line as two patterns—the recent, short-term wedge, and the larger, long-term wedge—have clashed.

found resistance for the third day in a row. 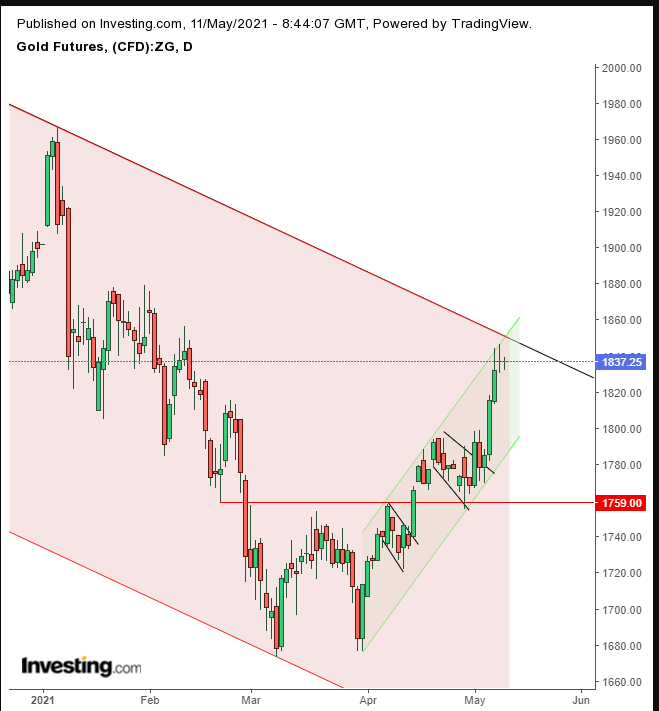 The yellow metal is at the top of its falling channel, despite dollar weakness, demonstrating a technical driver.

fell for the third day. 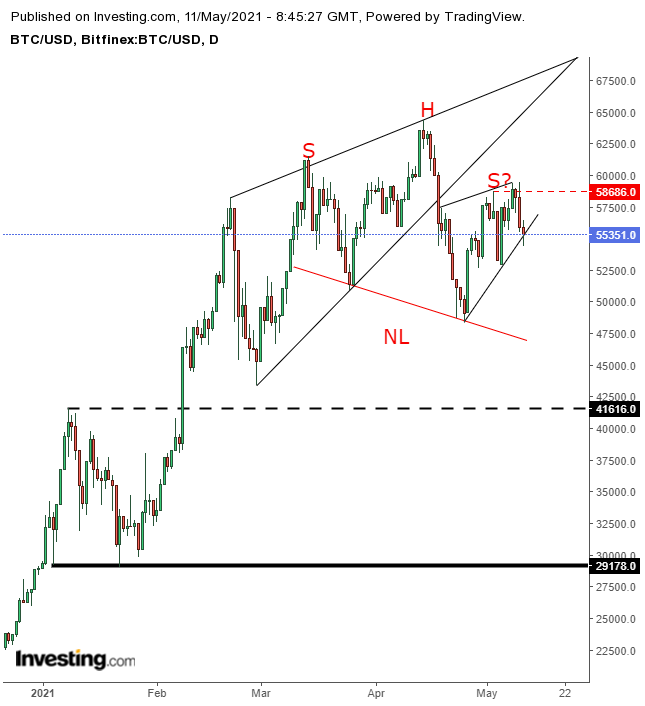 The most popular crypto by market cap is struggling against the bottom of a rising, bearish wedge, the second in a row, as it also paints the right shoulder of a H&S top, whose completion may halve its value.

dipped as traders monitored progress on the reopening of the largest US oil-products pipeline, which was paralyzed by a cyberattack on Friday, and is expected to be mostly back online by the weekend. 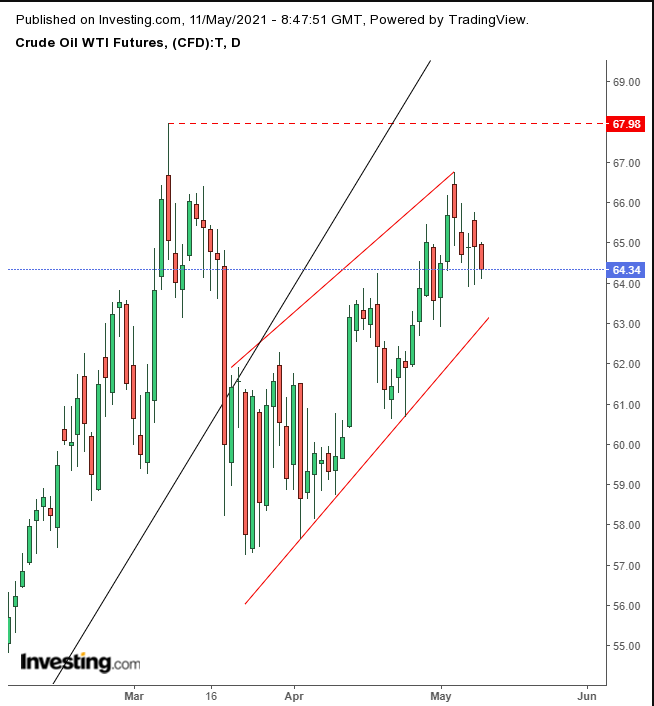 The price remains within a rising channel, which, however, is still below the uptrend line since the November bottom. If the price won’t top $68 soon, it will at least keep ranging, if not retest the $58 lows.