European equities and futures on the , and were struggling on Thursday, after renewed trade tensions rattled Asian shares and currency markets. Fresh diplomatic blows from the US and China threat to quash the impact of bullish earnings results from Wall Street heavyweights, which sent only 2 percent from its all-time high yesterday.

The , meanwhile, is on track for its highest close in a year as it gains ground for a third consecutive day, pushing emerging markets assets further down. In early European trade, it stood only 0.07 percent away from its June 28, 95.39 close.

At the opposite side of the spectrum, the is heading for its lowest close since July 26 2017, after the People’s Bank of China weakened its currency fixing for the first time since it started plunging in June, thereby singling it may let it slide further.

The pan-European opened slightly lower, then briefly crawled higher, only to slide back into the red as mixed corporate reports failed to provide traders with a clear indicator.

Japan’s closed at the very lowest point of the session ( -0.1 percent), halting a four-day winning streak on a sour note as it failed to hold on to early 0.5 percent gains.

China’s echoed yesterday’s performance as it gained 0.64 percent, then ran out of steam and ended 0.49 percent in negative territory, capping a five-day losing streak of 2.25 percent. Technically, it closed slightly below Tuesday’s hammer’s support.

Hong Kong’s also started on a strong foot, but then turned a 0.65 percent gain into a 0.2 percent loss toward the end of the morning session and posted a deeper 0.38 percent slide by the close, for an aggregate three-day slide of 1.7 percent. Technically, the price slightly extended a downside breakout of a bearish pennant, at the 28,000-support level since October 2017.

South Korea’s opened 0.4 percent in the green but by the closing bell it had slipped 0.34 percent lower, suffering an aggregate four-day decline of 1.27 percent.

Australia’s yet again bucked the trend as it sealed a 0.28 percent gain, though giving up a stronger 0.47 percent climb. Technically, the index is developing a second back-to-back continuation pattern. The supply-demand balance formed a continuation pennant, June 25 to July 5, complete with an upside breakout on July 6. Afterward, a second bear vs bull struggle developed in the form of a falling flag, July 10 till now. An upside breakout above the 6,280 level will complete it, completing the second half of a double bullish signal. 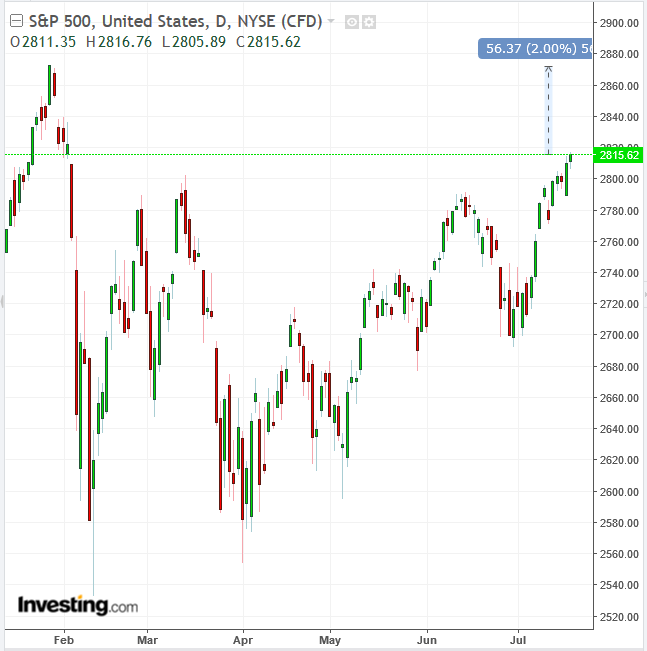 On Wednesday, the SPX was surged to 2 percent below its January, all-time high after the top six US banks topped a record $29 billion in net income for the second straight quarter.

Morgan Stanley (NYSE:) and Bank of America (NYSE:) outperformed, easily beating estimates thanks to their investment banking and consumer divisions.

Wells Fargo (NYSE:) was the only one among the six biggest US banks to disappoint expectations, hit by a decline in both loans and deposits

Overall, the upbeat set of data was favored by a jump in advisory and underwriting fees, to a total of $8.54 billion, better-than-expected trading gains and the lowest level of bad loans in nearly a decade.

This last indicator, broadly identified as the very first trigger of both the 2007 financial crash and the 1929 Great Recession, deserves special attention as it goes counter to mounting trade-war jitters on one side and warnings that the current US equity bull market–—the second-longest in history—is stumbling into an ageing business cycle on the other hand.

However, while yesterday’s earnings results were mostly a resounding success, the current earnings season has so far painted a mixed picture, leaving traders guessing whether they should focus squarely on company profits or continue to pay attention to the global geopolitical uncertainty looming in the background.

Elsewhere, US President Donald Trump said yesterday that the US and Mexico are “getting closer” to reaching a trade deal and that the administration may start separate talks with Canada. 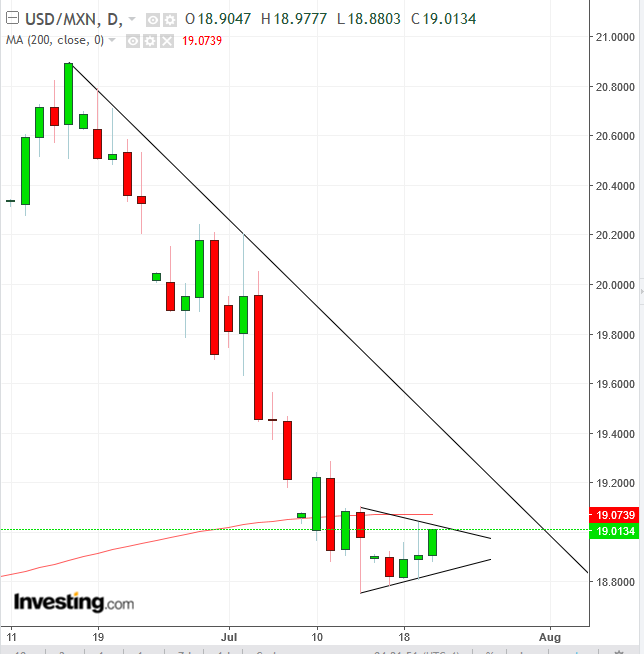 While the dollar has been gaining ground against other currencies, it has been falling or flat against the . Technically, the USD/MXN pair is trading within a bearish pennant, after having crossed below the 200 DMA. 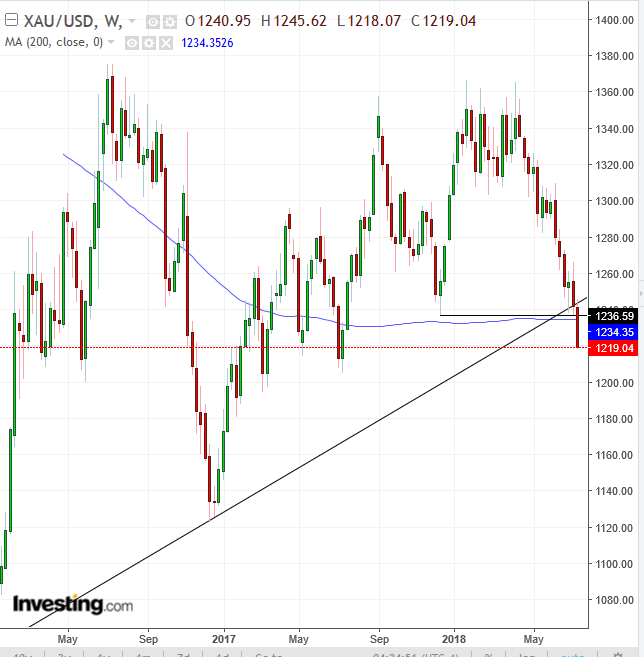 slipped lower for a fifth straight session, to the lowest level since July 17, 2017. Technically, it fell below its uptrend line since November 2015, the 200-week MA and the December $1,236.59 trough this week.

retraced some of Wednesday’s gains as investors assessed conflicting supply-and-demand signals from the US.