Monday’s global stock rally fizzled out during the European session this morning, with the and futures on the , and slipping lower. 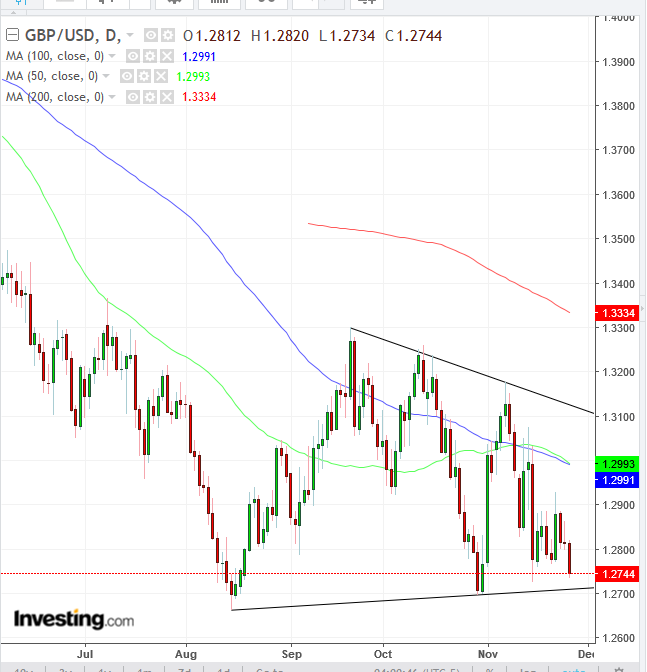 The fell as traders tried to assess the likelihood of parliamentary approval for Prime Minister Theresa May’s Brexit deal, amid remarks, by US President Donald Trump, that the draft agreement could jeopardize the UK’s ability to strike a trade pact with the US. Technically, this drop, for a third day, brings the GBP price back to the bottom of a symmetrical triangle, bearish after a decline. Contrarian investors may go long, with a stop-loss beneath the 1.2700 level, receiving an exceptional risk-reward ratio should the price retest the 1.3000 top level.

In the earlier Asian session, shares on Japan’s gained ground, (+0.64%), while they ended mostly flat on Hong Kong’s (-0.17%) and China’s (-0.04 percent). The relative resilience of Chinese investors is noticeable in the wake of Trump’s signals that the US is prepared to press ahead with its planned round of tariffs on $200 billion worth of Chinese goods in January—though a spokesman for China’s foreign ministry said the two counterparts had agreed to reach a deal in a November 1 phone call.

Yesterday, all US majors rallied at least 1 percent. After dragging the broader market down during the recent selloffs, technology stocks led the charge, leaving market participants wondering how much longer the current roller coaster—one of the wildest in five years on a monthly basis—will go on. 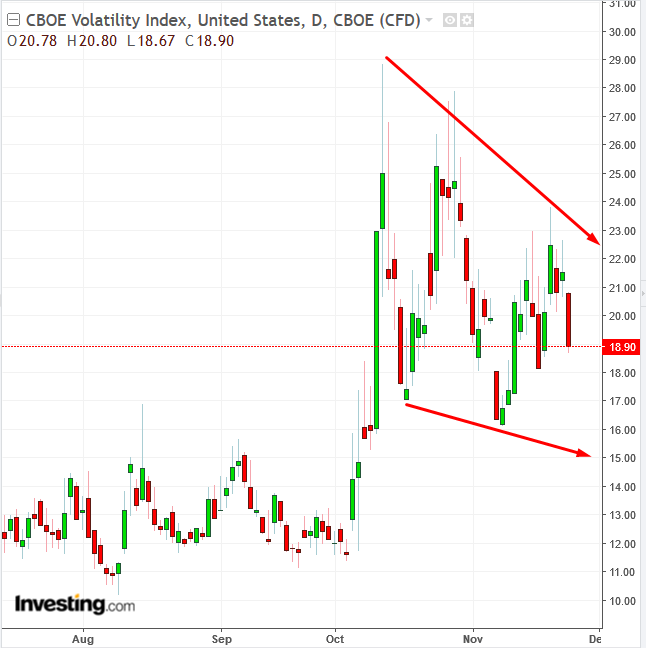 As we’ve been pointing out, is still hovering at the highest levels since April and all of last year. However, it has been subsiding since the wild price swings of early October, suggesting traders are reducing their bets for further volatility.

The leaped 1.55 percent, reversing the worst weekly performance in a month, as traders focus on the strong start to the holiday season, viewing it as a good omen for an economic uptrend. Almost every sector closed in the green, with (+2.28%) outperforming followed closely by (+2.26%) and (+2.24%). Despite the best performance in almost three weeks, the SPX underperformed major US indices. (-0.13%) underperformed. 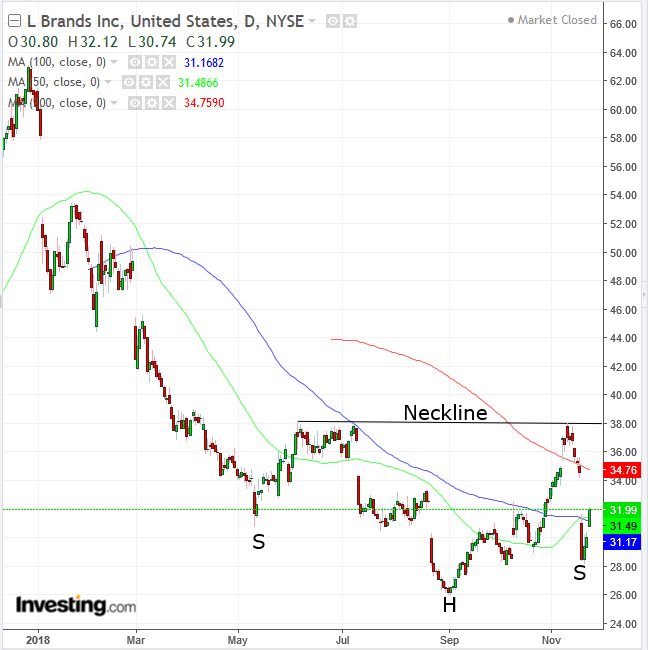 L Brands (NYSE:) (+6.74%) led retailers’ gains as it formed an H&S bottom, whose upside breakout above $38 would suggest a $50 target. Amazon.com (NASDAQ:) surged 5.28 percent and the other FAANG stocks gained at least 1 percent. CVS Health (NYSE:) rallied 3.54% after it won the New York regulator’s approval for its merger with health insurer Aetna (NYSE:).

The tech-heavy sprinted 2.06% forward, outperforming its peers, while the edged 1.15 percent higher. 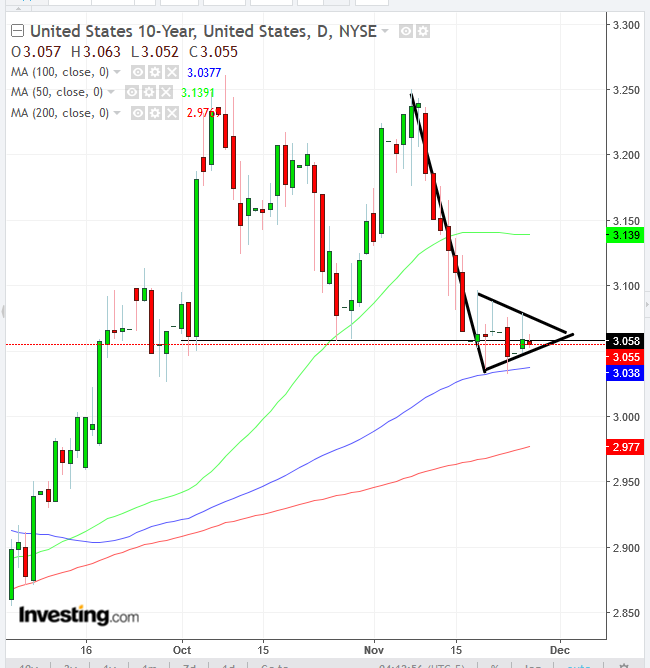 Yields on Treasurys consolidated despite yesterday’s bullish equity rally. Technically, the rate is forming a pennant, bearish in a downtrend, right on the very neckline of a double top reversal. The downside breakout would complete both the patterns suggesting a penetration below 3%.

The is charging ahead for a third day, breaking its tie to Treasurys. A further 0.5 percent rise would take it to the highest level since June 2017.

Meanwhile, is nearing our $3,000 target at $3,766 as the time of writing. Could a slowdown in cryptocurrency mining be triggering the collapse?

inched lower but remained above $51.00, while fell back towards $60 a barrel—though both bounced back in the late European morning.

The upcoming G20 summit, which begins on November 30 and Fedspeak will bring the two most significant headwinds in the spotlight to this late business cyclet: Sino-US trade relations and the US interest rate tightening path.

Fed Chairman ’s speech on Wednesday in particular will be closely watched for the latest thinking on the central bank’s tightening pace, as investors remain on the back foot amid heightened volatility and try to second-guess whether there will be a pause in rate hikes next year.

As to the former point, Trump’s latest tariff threat to China may further pressure a market that is already under strain. However, a resolution would undoubtedly carry a much bigger payoff, potentially propelling equities back into their longest bull market on record.