European shares slid after opening higher and futures on the , and hovered in red territory this morning, as a plethora of data misses continued to roil investor sentiment.

The fluctuated around yesterday’s closing price, initially climbing with automakers and miners shares. The early attempt to shrug off disheartening economic figures from the U.S. and China gave way to worries around global central banks’ accommodative turn, with ECB President Mario Draghi signaling economic caution in a speech on Tuesday. The upcoming round of high-level U.S-.China trade talks, taking place in Beijing on Thursday and Friday, also kept markets under pressure.

The pattern of weak data continued with China’s industrial firms, which posted their worst drop in profits for the months of January and February since 2011, plunging 14%. This follows the Chinese government’s reduced economic growth target for the year, to 6.0-6.5%, from 6.6% growth in 2018. 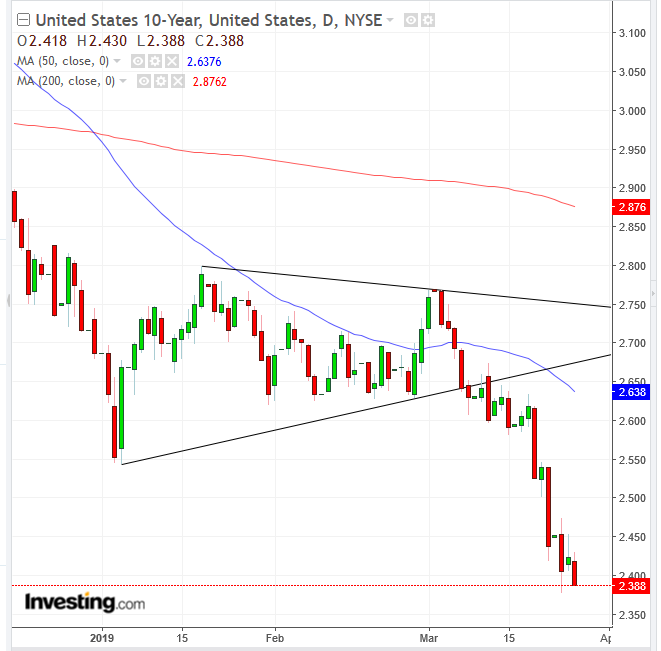 Meanwhile, the yield rebound seen on Treasurys yesterday was short-lived, as per our forecast. Posting further signs of market prudence, yields resumed their slide today, to 2.388 as of the time of writing—hitting their lowest level since mid-December 2017.

China’s (+0.85%) stabilized after a two-day selloff. Hong Kong’s (+0.76%) edged higher for a second day thanks to dip-buying in the final hour, following a four-day drop.

Australia’s (+0.09%) also firmed up, climbing for the second session, as it rebounded from an early selloff, only to find support above the 50 DMA, after last week’s golden cross.

In yesterday’s U.S. session, stocks pared the decline that had been triggered by the Fed’s —which in turn prompted the first real yield curve inversion since the one that signaled the 2008 crash and the following recession. The rebound in equities coincided with an apparent stabilization of 10-year yields, as Bank of America helped ease some market concerns by switching its advisory from defensive to cyclical, citing the Fed’s policy shift and signs of stabilization in the global economy. 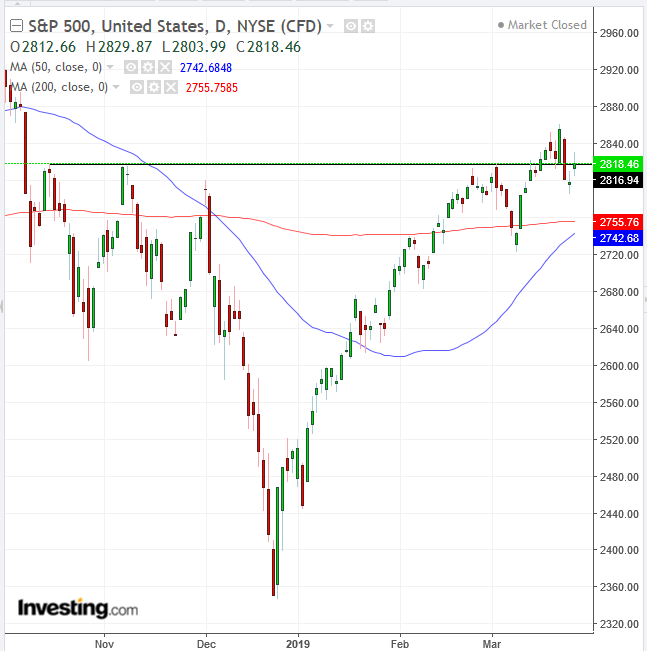 The gained 0.72%, with all eleven sectors in the green. (+1.44%) and (+1.19%) led the rally—the former tracking prices higher after Russia reiterated its pledge to cuts, the latter supported by the yields paring some losses. Oddly, (+0.43%), a growth sector, lagged. Technically, the SPX closed less than 0.1% above the resistance formed by the October peak, demonstrating lingering supply at these levels.

The gained 0.71%—coming just 0.01% behind the SPX. Technically, the tech heavy-benchmark closed 0.3% above its October peak.

The advanced 0.55%, underperforming among U.S. majors. Technically, the price resumed an advance to its second day, after finding support above the 50 DMA. The current rebound helped develop a symmetrical triangle, presumed to be bullish in the uptrend since the December bottom, complete with an upside breakout above 260.00.

In FX markets, the was almost flat, after giving up an advance to 97.00. The bounced back from an earlier decline, to end flat for the third day in a row.

The slid more than 1% after the country’s central bank the global shift away from higher interest rates. The also retreated. 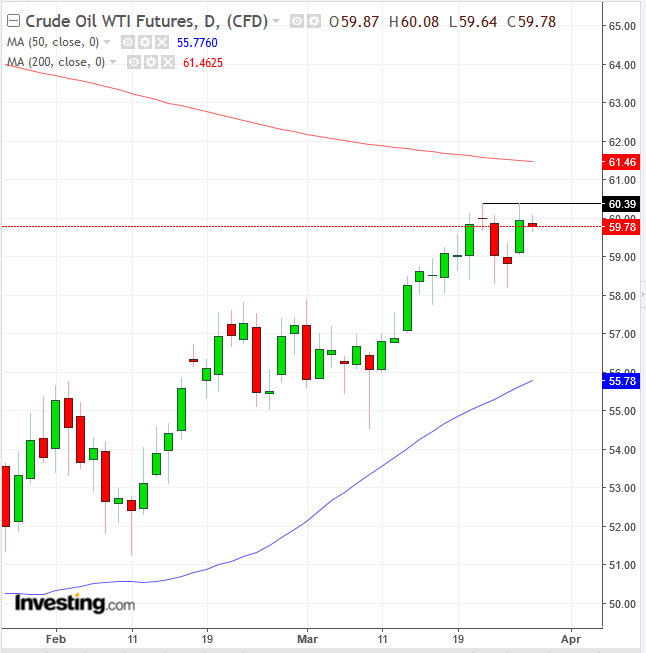 Oil prices slipped after enjoying a temporary rally triggered by Russia’s commitment to its production cut targets—in line with Saudi Arabia’s tenacious lower supply strategy. Perhaps the resumed decline of Treasury yields scared off investments into the growth-sensitive asset. Technically, the price is unable to cross over the March 21, $60.39 peak.