Global equities rebounded on Wednesday, as European indices and US futures on the , and took their cue from Asian gains.

The previous US session, which saw local indices bounce back from intra-session lows, showed that investors were already on track to find some stronger footing after the quick deterioration of US-China trade relations sparked widespread panic selling in Asia and Europe on Tuesday.

Today, yields on US Treasurys stabilized around 2.9 percent, and the continued to inch higher.

Does this mean investors can expect a sustained stock rally across global markets? We doubt it, as Asian and European indices have already undergone several reversals. We consider today’s rally nothing more than an upward correction within a downtrend.

US majors, however, remain safely within uptrends, and we expect shares will post higher prices later today.

The pan-European opened in the green, finally halting a three-day slide, as most regional exchanges and sectors were posting gains. Technically, the session low seen on Tuesday formed a second, lower trough than the 382.14 price formed on May 31. This completed the peak and trough succession required to establish a trend.

The downtrend in the continental benchmark had already become clear during Monday trade, when prices crossed markedly below the uptrend line since March 26. The price move also confirmed the downtrend line since January 23. Bulls would have to drive prices above 400.00 to reverse course.

Earlier, during the Asian session, regional indices also attempted a recovery, though the supply-demand balance suggests it may be too little too late to avert a sharper price correction.

Japan’s turned a 0.9 percent drop into a nearly 0.5 percent advance. The rally was led by growth stocks in the consumer sector, while risk sectors such as materials—the hardest hit by trade uncertainties—and financials retreated. Buyers remembered the last time that prices had rebounded from around the 1730.00 level to 1800.00 in the two weeks between May 30 and June 13, rallying over 4 percent. On the other hand, the index also posted a trough lower than in May, potentially signaling a trend reversal.

China’s also bounced off the session low, negative 1.2 percent, sealing a 0.4 percent gain. Technically, after drawing a line of demand at the 3000.00 level, a support since January 217, mainland Chinese shares are in a clear downtrend.

Hong Kong’s climbed 0.95 percent, ending a four-day, 5.2 percent selloff. Technically, however, the 2.75 percent plunge the index posted on Tuesday completed a consolidation, suggesting a resumption of the double-digit correction seen in February, as nervous sellers lower their prices to find buyers. 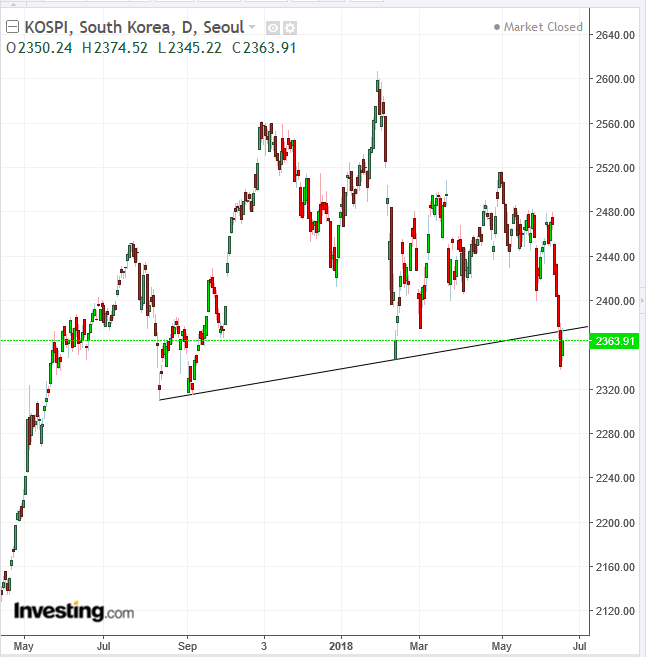 However, after falling to the lowest price since September 2017 and thereby completing a conspicuous, full-year, Complex H&S top on Tuesday, the South Korean benchmark showed that: 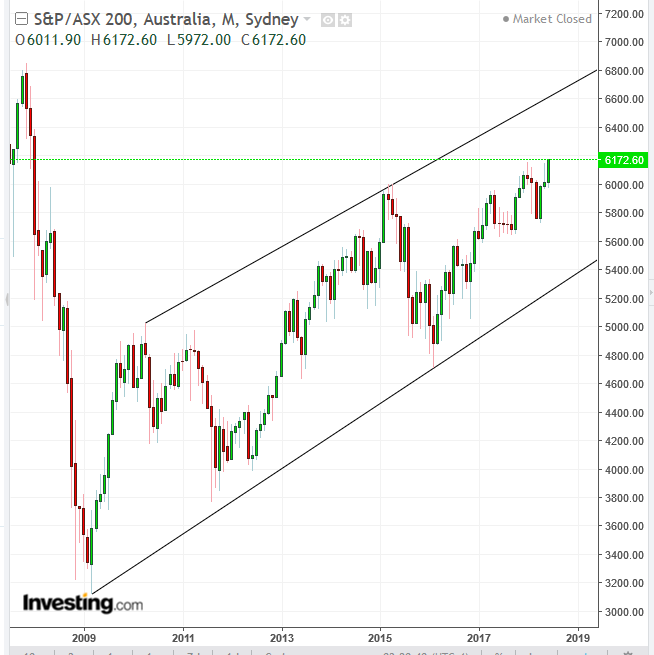 Australia’s was once again the regional winner, as 2 percent gains in financials shares helped the Aussie index jump 1.15 percent. Technically, the price withstood yesterday’s powerful shooting star and held onto all its gains, as it traded at the top of the session. As well, it reached the highest level since January 2008, as demand absorbed a line of supply at the 5150.00 level since the beginning of the year, confirming the long-term uptrend since February 2009.

While global selling seems to have slowed down, the fact that all major Asian stock benchmarks (apart from the S&P/ASX 200) and Europe’s STOXX 600 completed a bearish pattern paints a dismal outlook for non-US stocks.

Conversely, US majors have fended off most geopolitical headwinds and, on a technical level, remain well above their uptrend lines since the February low.

Despite the fact that the hit its sixth straight loss on Tuesday—its longest slump in over a year—and the dropped the most in three weeks, the two indices closed well off their intra-day lows, in a clear sign that there’s no shortage of investors eager to buy the dip. 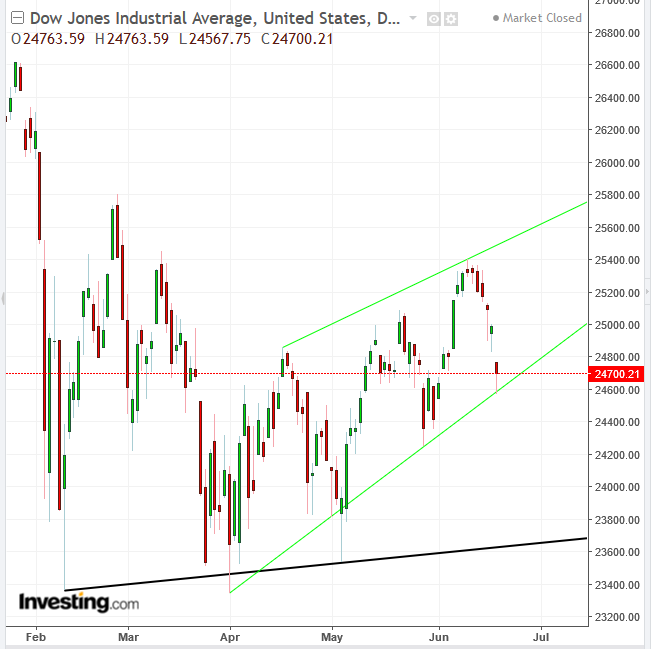 Even the Dow, whose listed mega-cap companies are particularly sensitive to trade tariffs, has managed to bounce off the bottom of the rising channel since April, closing more than 5 percent above the previous February 23360.29 trough.

If anything, since the global trade war saga started to unfold earlier this year, major US stock averages rebounded within days after each trade policy announcement, making those cheaper trades very profitable. Until that pattern breaks, we can expect traders to continue to buy into dips.

In other news, the price of managed to recover to above $65 a barrel, even as Iranian officials warned that OPEC members may fail to agree on output limits when they meet at the end of the week in Vienna. Iran, recently hit by the reinstatement of US sanctions, is fighting its own battle to ward off a supply pick up from other oil-producing countries. 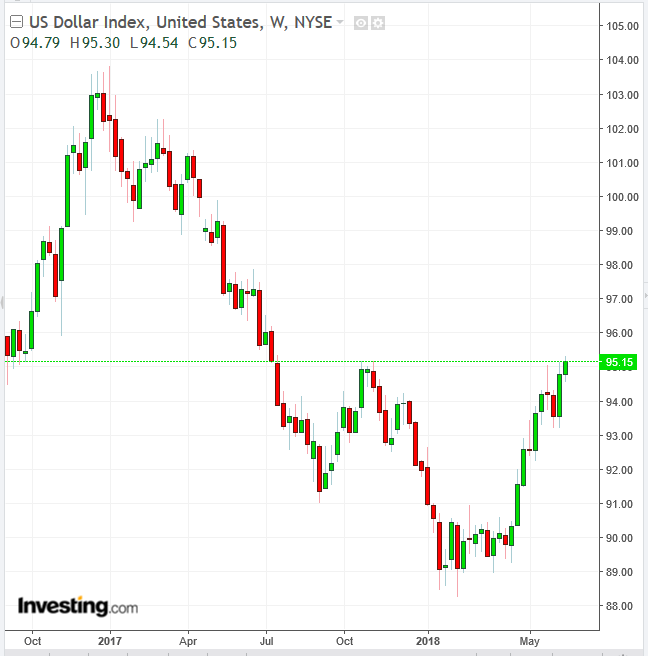 The dollar is on track for its highest close in 11 months as it continues to gain ground for the third consecutive session. USD gains are weighing down on the , the and the . Meanwhile, slipped lower for a second day, after the stronger dollar pushed it lower on Tuesday despite the global equity selloff.

The edged higher after the People’s Bank of China set its daily reference rate at a higher level than forecast by both analysts and traders.

Shares from developing nations stocks also climbed on Wednesday, trimming the heavy losses they suffered on Tuesday when escalated trade tensions added to an increased outlook for faster US interest rate hikes. were the regional laggards, as traders returned after a holiday. The fell again ahead of an election this weekend.