US contracts on the , , and edged lower on Tuesday after China tightened its monetary policy, pouring cold water on market optimism for a strong economic recovery. The earlier sentiment had boosted the and the to new highs on Monday.

In Europe, the Index opened higher and gained as much as a full percent, scoring a new all-time high, after overtaking the previous all-time high reached on Feb. 19 2020. The move demonstrated local confidence as Europe ramps up its vaccination program after coronavirus lockdown restrictions overshadowed the Easter holiday.

US futures lagging European shares may seem counterintuitive when recent US economic data plays up a recovery—Friday’s showcased the biggest increase since August, ongoing fiscal relief including President Biden’s $2 trillion infrastructure plan, and the strong growth as well as a successful vaccination program are putting fire back into America’s economy. However, it makes perfect sense that investors will lock in profits after stocks continue to hit new records week after week, while the pan-European benchmark is playing catch-up.

BP (LON:) gained 2% after it announced it may start share buybacks sooner than anticipated. The energy major expects to hit its $35 billion net debt target in the first quarter of 2021, earlier than expected.

Shares in Credit Suisse (SIX:) whipsawed after the Swiss lender announced that due to the fallout from the Archegos Capital Management debale, it will write off $4.7 billion, almost double its 2020 net income, halt its share buyback program, cut its 2020 dividend and replace a number of senior executives. The bank dumped $2.3 billion worth of blockshares related to that overleveraged trade.

Shares of Credit Suisse have now suffered a 19% drop, which may present a buying opportunity. 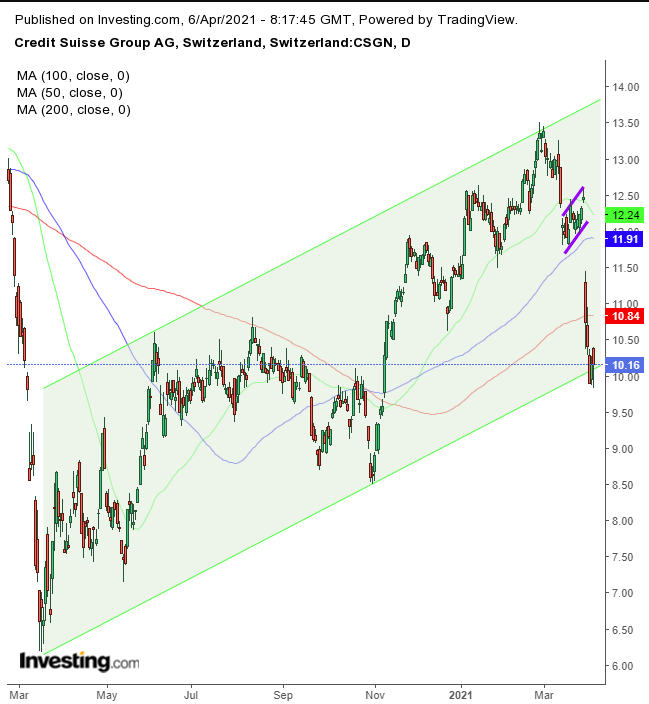 The selloff was foretold by the rising flag that preceded it, demonstrating continuous selling pressure against the Archegos long position. However, the flag’s target has been more than achieved and the price found support for the third day at the bottom of its rising channel since the March bottom. This makes the case for a bottom.

Stocks in Asia were mixed, after the PBoC announced its intentions to limit loans to China’s lenders for the remainder of the year in order to maintain 2020 loan levels. Chinese policymakers have shifted their focus from a post-pandemic recovery to mitigating bubble risks.

China’s closed flat, even after the nation’s services sector activity expanded in March, with the private survey rising to 54.3 from 51.5, which distances it from the 50 cutoff line between contraction and expansion.

Australia’s closed up 0.8% after the Reserve Bank of Australia its monetary policy on course.

US stocks rallied yesterday on evidence of that an economic recovery is underway. Service providers enjoyed the fastest expansion ever in March as jumped to a record level. The Institute of Supply Management data confirmed Friday’s NFP report which showed the most monthly jobs addition in seven months.

Alphabet (NASDAQ:) surged 4% after the US Supreme Court acquitted the tech giant of copyright infringement when using Oracle’s (NYSE:) programming code in the Android operating system. The stock had already jumped on Thursday, ahead of the ruling. 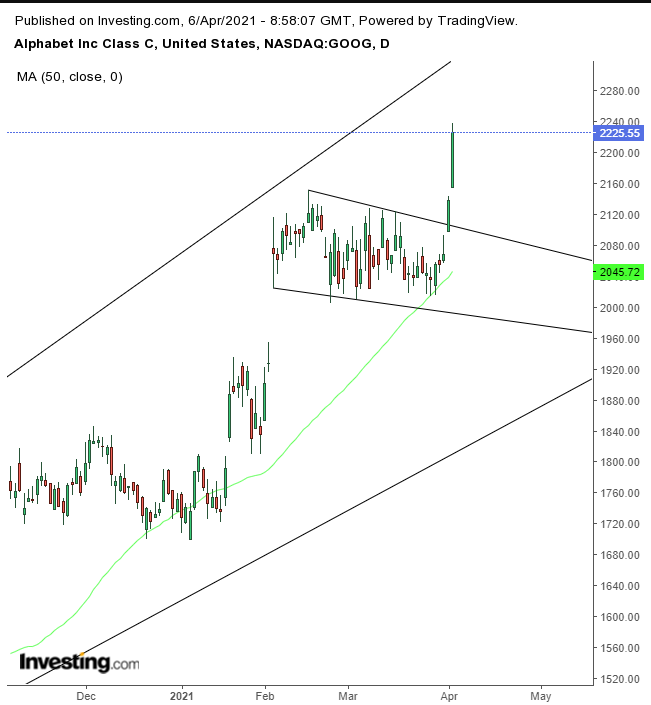 GOOG pushed through a range on Thursday. Although it was a positive day for big tech yesterday, Alphabet’s stock outperformed and is now back in a long-term uptrend. 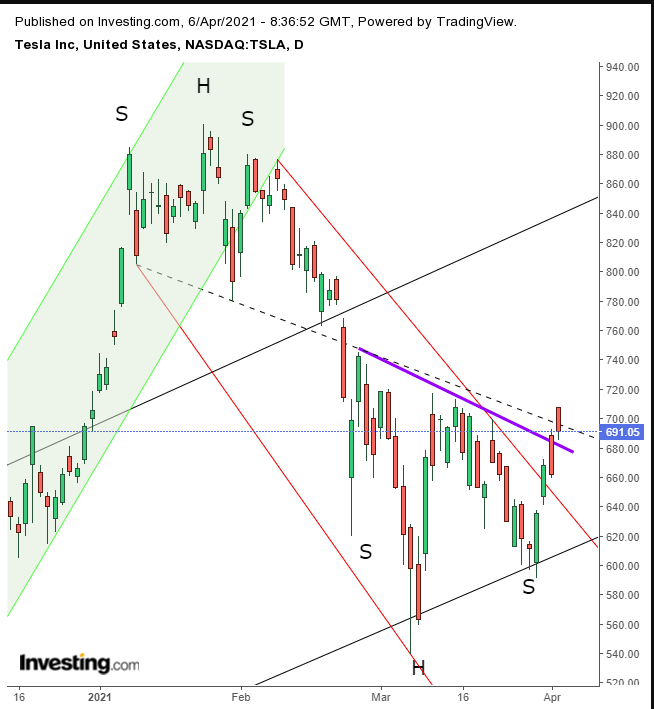 Shares in the EV manufacturer completed a H&S bottom.

Reddit favorite, GameStop (NYSE:), “the unshortable stock,” plummeted nearly 14% after the company announced plans to sell up to $1 billion worth of additional shares. 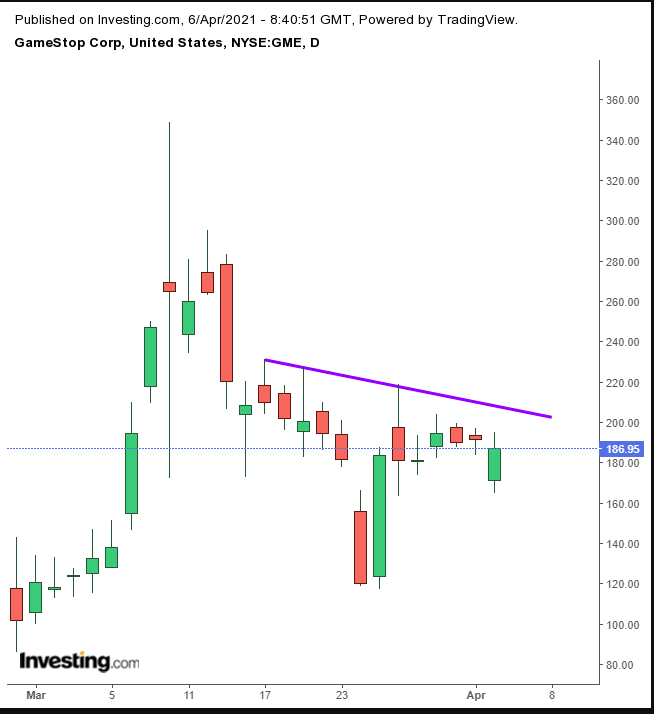 However, persistent demand pushed it right back up, paring losses to just 2%. The stock may be forming a H&S bottom.

Yields on the Treasury note were steady, and the rebounded where the 200 DMA met the bottom of a rising channel. 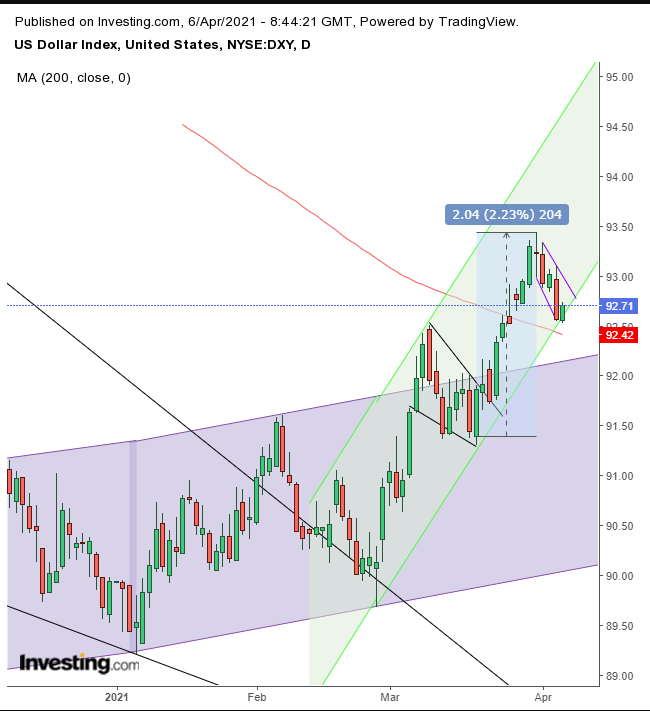 The move formed a potential falling flag, bullish after the explosive 2%, 10-day rally that preceded the pause.

impressively rose against the weight of a strengthening dollar. However, it pared most of the gains. 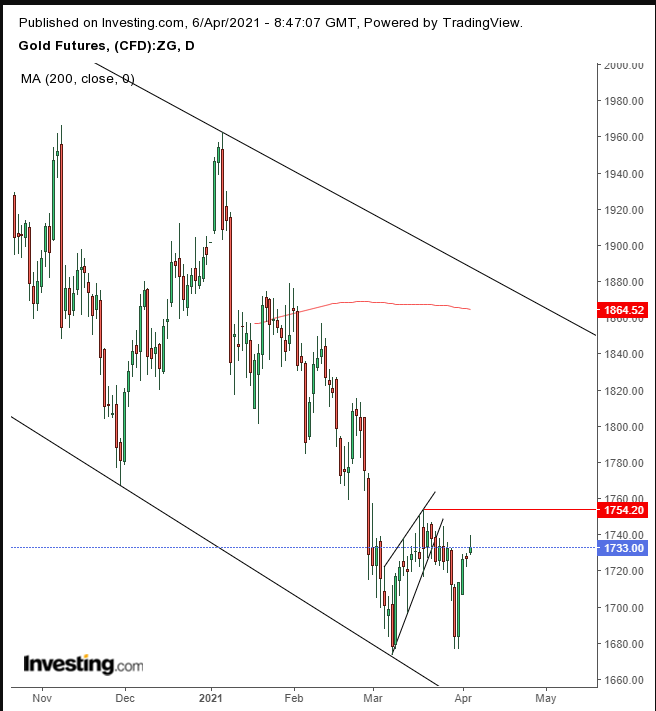 The yellow metal formed an intraday shooting star, revealing resistance below a bearish flag, signaling a potential end to the recent rally. The uptick is considered a return-move, before it continues lower, unless it bottoms, piercing the $1,760 level.

rebounded as expectations of a breakthrough in talks to revive the Iranian nuclear accord were scaled back, reducing the odds that crude flows from the country would increase further. The technicals seem for now to disagree with that outlook. 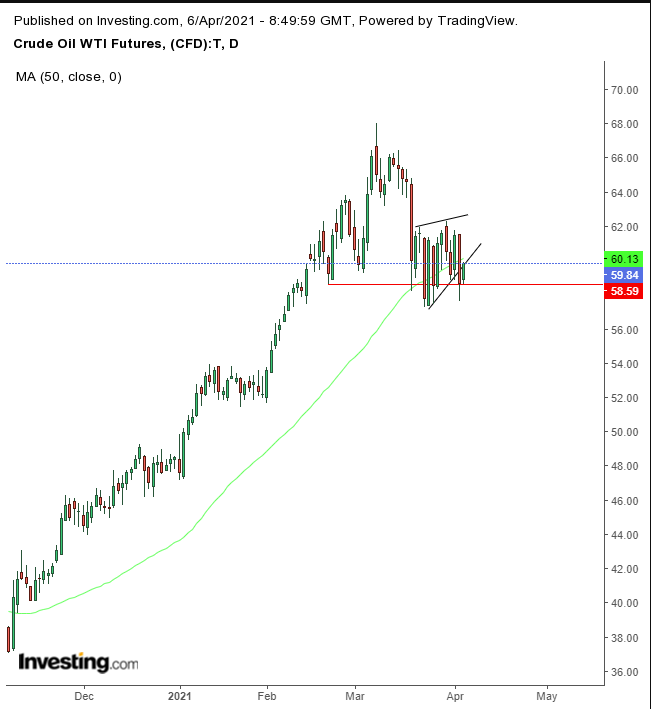 Oil’s rally found resistance by the bottom of a bearish flag, on the cusp of completing a H&S top.