Futures on the , , and as well as European stocks started the new quarter on Thursday on the right foot.

Concerns from yet another coronavirus wave were quashed by indications of faster-than-expected jobs creation in the US and President Joseph Biden’s announcement of a significant infrastructure spend.

The dollar faltered while gold continued its rally.

As investors await Friday’s report, the tech-heavy NASDAQ contract was leading the rebound, building on yesterday’s outperformance of its underlying gauge. The closed 1.5% higher on Wednesday as March data revealed that private American employers job numbers by the highest level in six months.

The positive data convinced US investors that stocks will continue to advance, despite the announcement from its neighbor to the north of additional COVID-19 restrictions. Canada’s Ontario province has instigated a 28-day lockdown in an effort to mitigate the spread of the coronavirus. Meanwhile, in Brazil, a new strain, similar to the South African strain, has been identified and the country is reporting record fatalities.

In Europe, the Index climbed 0.3% as of the time of writing, in its longest streak of weekly gains this year. The benchmark is now within half-a-percent of the its all-time high.

Regional chip makers ASML (AS:), ASM International (AS:) and Infineon (DE:) jumped between 1% and 3%, boosted by a positive revenue forecast from American chipmaker Micron Technology (NASDAQ:).

The positive moves are particularly impressive considering that France has announced it is imposing a third national lockdown—weighing on local retailers and travel firms. Despite this, local hotel group Accor (PA:) traded higher, perhaps on forced postponed bookings. Technically, Accor’s investors are being set up for another leg down. 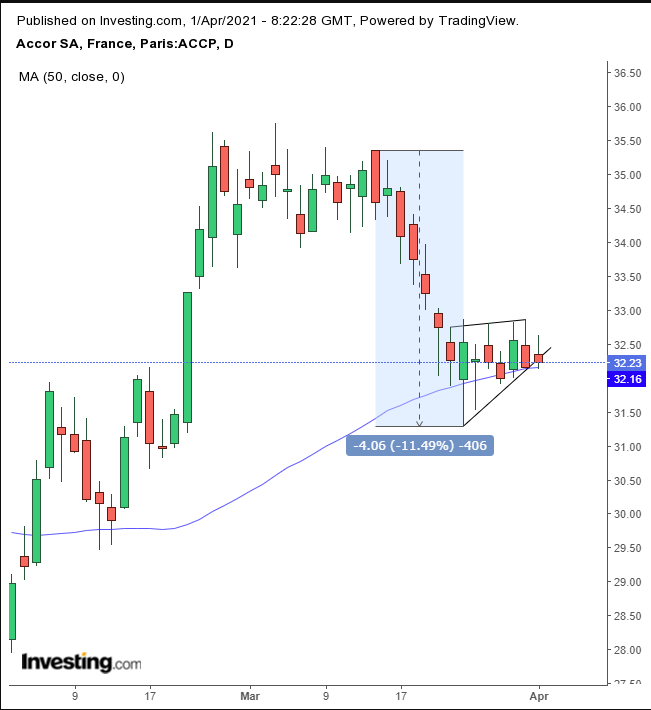 The stock found support by the 50 DMA, as it struggles to remain within a rising flag, bearish after the 11.5% plunge within a little over a week.

Pfizer (NYSE:), on the other hand, announced its vaccine has shown 100% efficacy in its final-stage trial on children between the age of 12 and 15. Also, the WHO declared China’s vaccine is safe and effective.

Shares in UK retailer Next PLC (LON:) moved higher after it increased its full-year profit forecast just days before shops in England can reopen after the country’s third lockdown.

In the US, the tech sector rebound was led by Apple (NASDAQ:), Microsoft (NASDAQ:) and Tesla (NASDAQ:), which all closed in the green on the last day of the quarter—in which the sector lagged the overall market.

Small caps listed on the fared second best, with the index climbing 1.1%. Another gauge of the reflation trade, value stocks listed on the closed 0.25% in the red, demonstrating how growth stocks appear back in favor. Of course, at this point, it is still considered a correction within the trend.

The posted a new all-time high. However, the benchmark failed to post a record close, releasing its grip at the end of trading.

Yields on the Treasury note retreated from 1.75%, as investors considered delivery challenges to President Joseph Biden’s ambitious infrastructure plan, which he outlined on Wednesday, adding to the growth outlook. 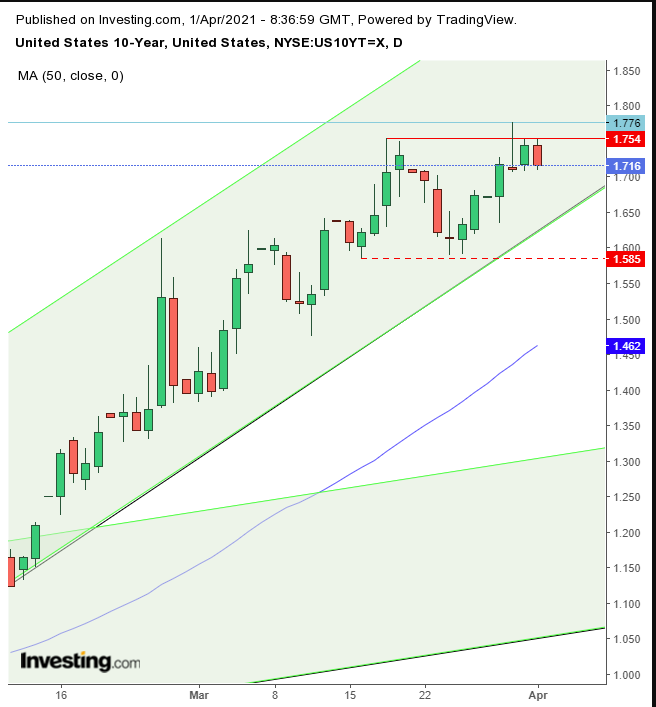 Rates have maintained a positive correlation with the cyclical rotation, and are confirming a resistance for the second time, after Tuesday’s shooting star, demonstrates the importance of this level and its likelihood to create an explosive move. If the price does not climb over 1.7%, but turns below 1.6%, it may top out, indicating a slower ascent to rates.

The was dragged down by falling yields. 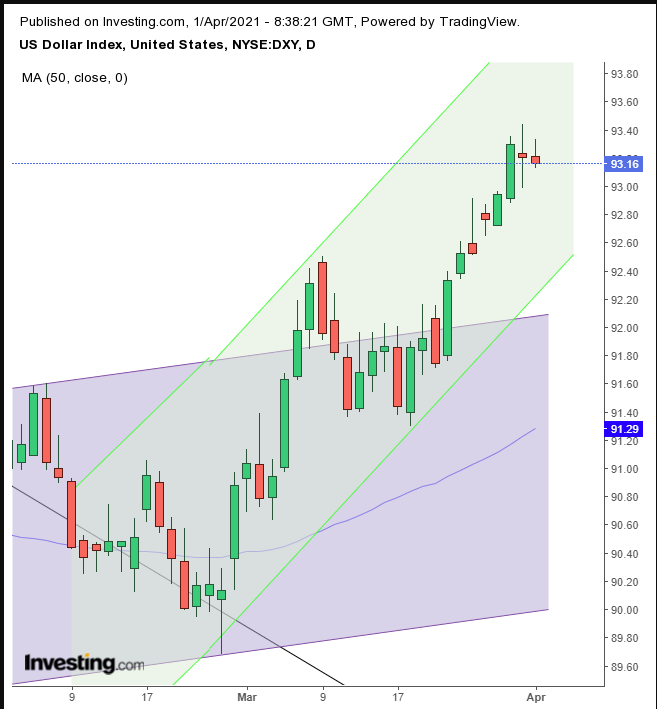 The greenback slid for the second day, after Wednesday’s high-wave candle, signaling a potential pull back toward the bottom of its rising channel.

, in mirror image of the dollar, climbed for the second day. 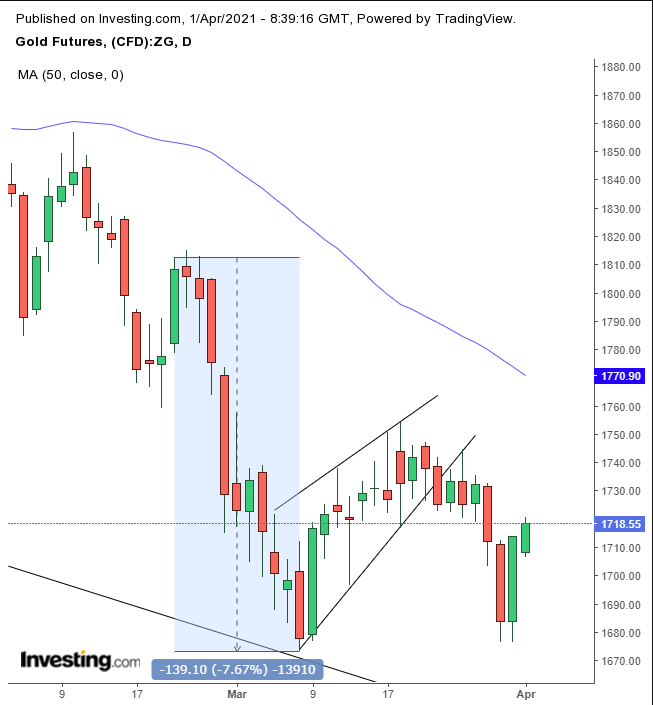 The yellow metal formed a return-move to a completed bearish flag.

rebounded back above $60, a milestone it was struggling to maintain, ahead of an OPEC+ on the question of extending production limits. Technically, oil traded within a bearish pennant.