Despite the expectation that the Biden Administration’s spending plan will provoke a steep hike in inflation, futures on the , and were only moderately higher in trading on Tuesday, while futures were marginally lower. European stocks were also trading in the green, slightly below record highs.

The Index climbed slightly with havens like utilities. Automakers dropped 0.8% after a six-day rally, which had driven the pan-European benchmark to a record high. German data revealed that Europe’s largest economy’s fell short of expectations, providing further evidence of supply bottlenecks and semiconductor shortages causing a slower than expected recovery in Europe’s steam engine economy.

Swiss drug maker Lonza (SIX:) gained over 5%, taking the stock to an all-time high, after Goldman Sachs upgraded the stock to “buy,” while British American Tobacco (LON:) rose as much as 2.5%, before paring the gain to 1.6%, after raising its annual revenue growth forecast.

Focus was on yields, with the rate falling back below 1.6%, though it pared losses and settled at 1.57% as of the time of writing. All eyes are on the data which potentially may influence the Fed’s decision on tapering its stimulus. 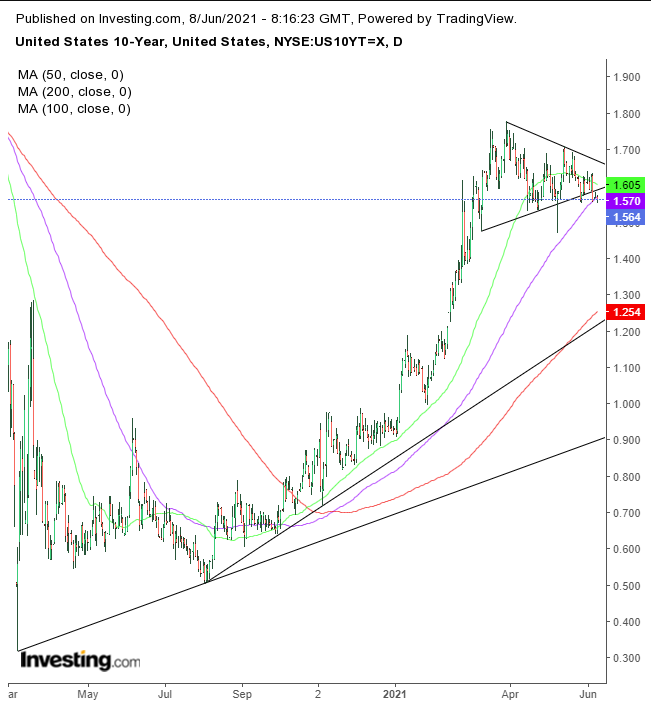 Yields may have provided a downside breakout to a symmetrical triangle. After their inability to traverse the 50 DMA, rates are struggling to remain abreast of the 100 DMA, before they fall back toward their uptrend line—at 1.25% where the 200 DMA guards—or even lower to 1.00%.

Taking its cue from Treasuries, the advanced. 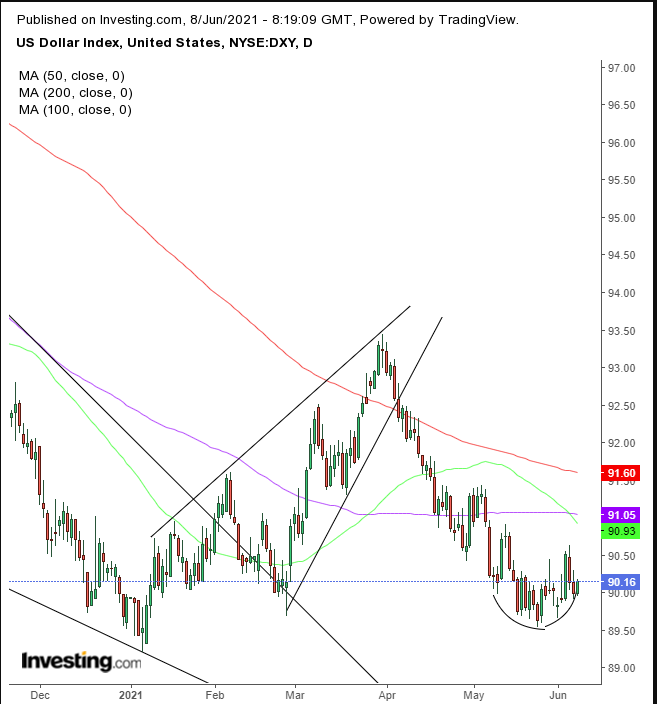 The greenback found support at the bottom of a rounding bottom, whose completion would indicate a return to the March highs, which were cut off with a bearish wedge. However, we have been arguing that the price decline from the March 2020 peak was in the shape of a bullish wedge. If we were right, the price should return to a medium-term uptrend. If the price falls below 89.00 we turn wholly bearish. 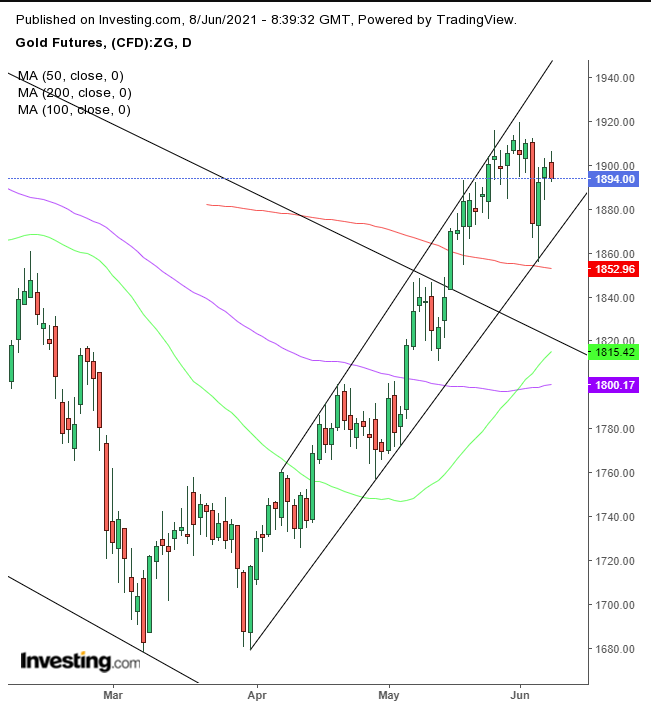 Gold remains within a rising channel, after confirming support of the 200 DMA, which previously realigned with the top of a massive falling channel since the 2020 record top.

is falling for the fourth out of five days after former President Donald Trump—who thinks running for a House seat in 2022 is a “very interesting” idea—warned that Bitcoin is a “scam against the dollar.”

Bitcoin is still suffering from persistent tightening regulations in China and fell significantly after Tesla’s (NASDAQ:) about-face in May on accepting the digital coin as payment for its cars. 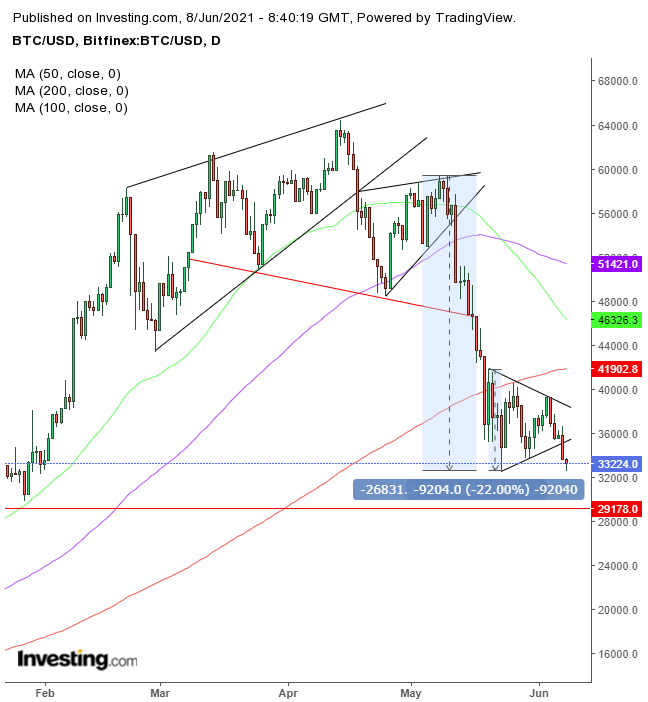 Bitcoin extended the downside breakout of a bearish pennant, suggesting the crypto will retest the $30,000 level, challenging our recent bullish call.

extended a decline, losing some momentum after hitting $70 a barrel in New York for the first time in over two years. 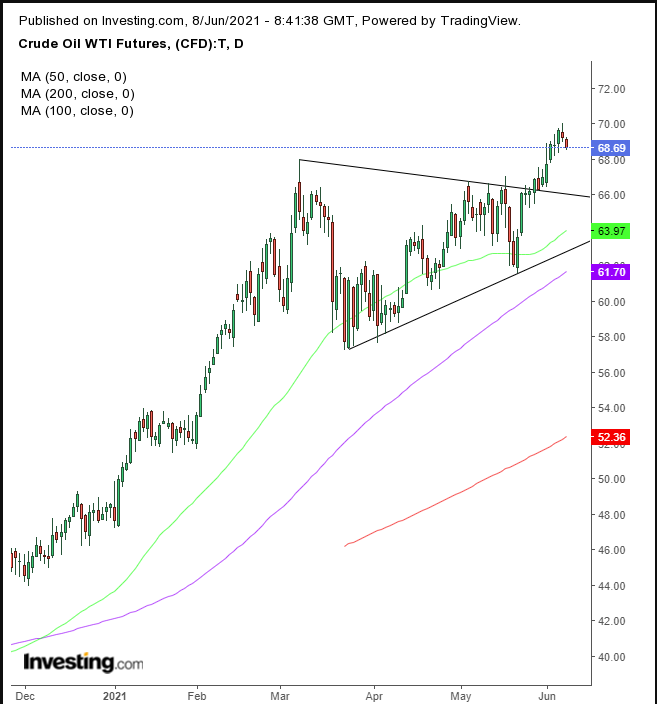 We consider the second-day decline is part of a return-move, before prices take off, having completed a bullish triangle.