Global stocks were mixed on Tuesday as investors awaited the results of the US midterm elections. Shares in Europe slipped lower alongside futures for the , and , while Asian indices ended mostly higher. Treasury yields edged lower, the reversed early losses and the extended an advance on Brexit hopes.

The gave up earlier gains, dragged down by financials and carmakers.

Earlier, during the Asian session, Japan’s outperformed with a 1.05 percent advance and China’s underperformed with a 0.23 percent slide, even as Chinese Vice President Wang Quishan said that he’s ready to discuss trade solutions with the US.

Yesterday, US Treasury yields pulled back from a near-month high and shares gained ground, boosted by Berkshire Hathaway (NYSE:). Warren Buffett’s multinational financial conglomerate climbed the most since July after the company’s regulatory filing, which was published on Saturday, revealed it bought back $928 million worth of shares.

As well, dip buyers took advantage of October’s brutal selloffs, after the dropped 1,300 points, or 5 percent—the most since the January 2016 correction. The plunged almost 7 percent over the month, suffering its worst loss since September 2011, and the took its most significant hit since November 2008, a whopping 9 percent.

During Monday’s session, the SPX climbed 0.56 percent, with shares outperforming (+1.67 percent), even as prices continued to fall. also inched higher (+1.66 percent), on upbeat economic data, even against a backdrop of , which could weigh on REIT profits. Berkshire Hathaway’s ranking as the world’s second-biggest real-estate broker also boosted the broader sector.

advanced (+1.59 percent) on a stronger outlook for interest rate tightening following Friday’s beat and the highest annual since before the financial crisis. (-0.41 percent) was the day’s laggard, followed by (-0.1 percent), which was dragged lower by Apple (NASDAQ:), Facebook (NASDAQ:) and Amazon (NASDAQ:). 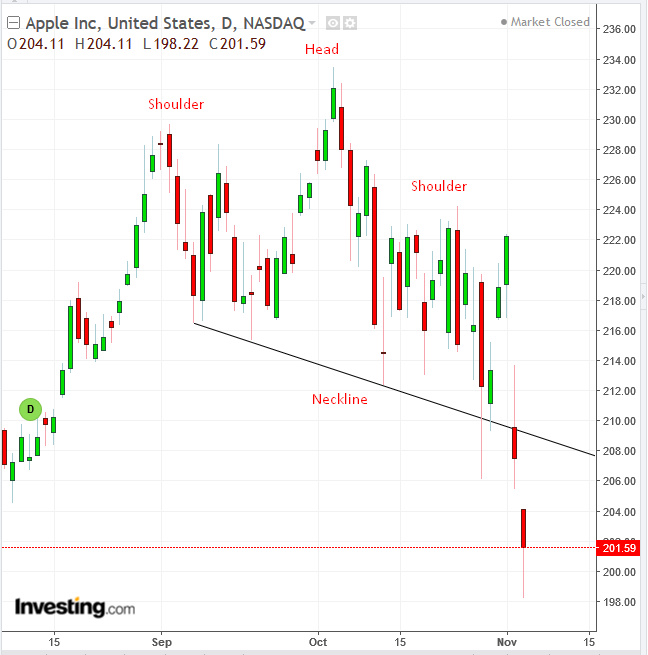 Apple’s share price slid 2.84 percent yesterday, for a total two-day loss of 9.34, after reports surfaced that the iPhone maker wouldn’t boost iPhone production. This comes after the company hit a $10 billion all-time high for services revenue—a crucial component for tech companies making the transition from product sales to services. The stock’s intraday low price reached 45 percent off the $190 objective we pinpointed last week. For those who missed the opportunity, look for a bounce as part of a return move to test the reversal’s integrity.

Even after yesterday’s rally, the S&P 500 Index remains below the triple resistance of the uptrend line since the February 2016 bottom, the 200 DMA and a bearish flag, drawing a supply-demand nexus line in the sand.

US politics and central bank policy decisions from the , and dominate a busy week for markets. The US midterm elections are considered a referendum on President Donald Trump’s policies. Meanwhile, investors are also monitoring Brexit developments, with British Prime Minister Theresa May redoubling efforts to strike a deal with EU counterparts ahead of a cabinet meeting later today. 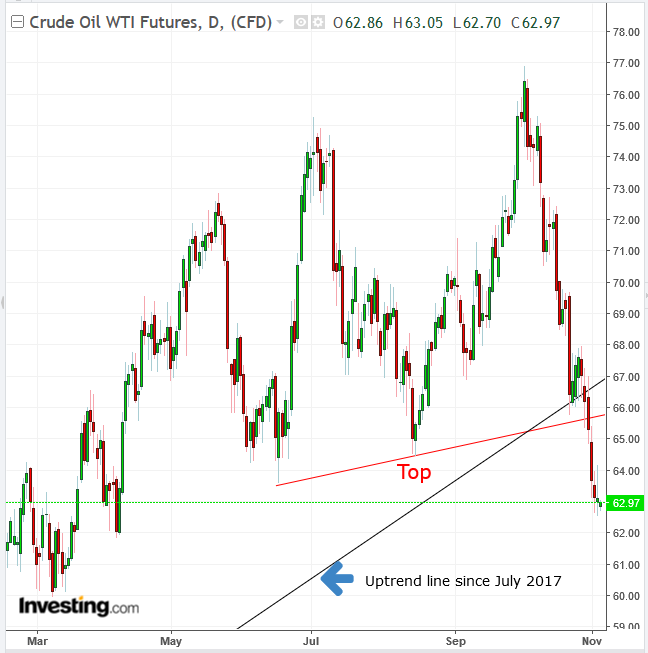 In commodity markets, oil is slipping lower for the seventh straight session on yesterday’s reports that Iran was shunning US sanctions to resume selling and that the US itself had granted waivers to eight oil-importing countries. The WTI price remains under pressure after crossing below the 200 DMA, the uptrend line since June 2017 and after topping out.