US futures on the , , and rebounded along with European stocks on Monday, despite declines in Asian trading. Yields traded lower in a sign that investors are second-guessing Friday’s rush to embrace concerns of higher inflation in response to Wednesday’s surprisingly hawkish Fed.

Oil wavered as traders await news from the US-Iran negotiations.

Value shares dominated in the second half of 2020, when the —which lists domestic firms that suffered the most throughout coronavirus social restrictions—outperformed the other major US stock market averages, gaining 37%, a double digit advantage over the second-best performing 26.7% growth of the tech-heavy .

Having said that, these are patterns, so naturally, the reflation trade goes up and down like a seesaw in reaction to market and economic developments. At the moment, for example, futures on the Russell and the Dow Jones Industrial Average—two of the indexes that best reflect value, are up 0.6%, outperforming slightly.

European shares on the overcame the negative inertia created by the Asian session where cyclical sectors underperformed.

Shares in Asia declined this morning, as traders were still smarting from the Fed’s first of tightening. Japan’s underperformed, falling 3.3%, crossing below 28,000 for the first time in a month.

Yields on the Treasury note fell to the lowest since February before recovering. So, did yields, which have currently not just wiped out the decline but turned the move into gains. 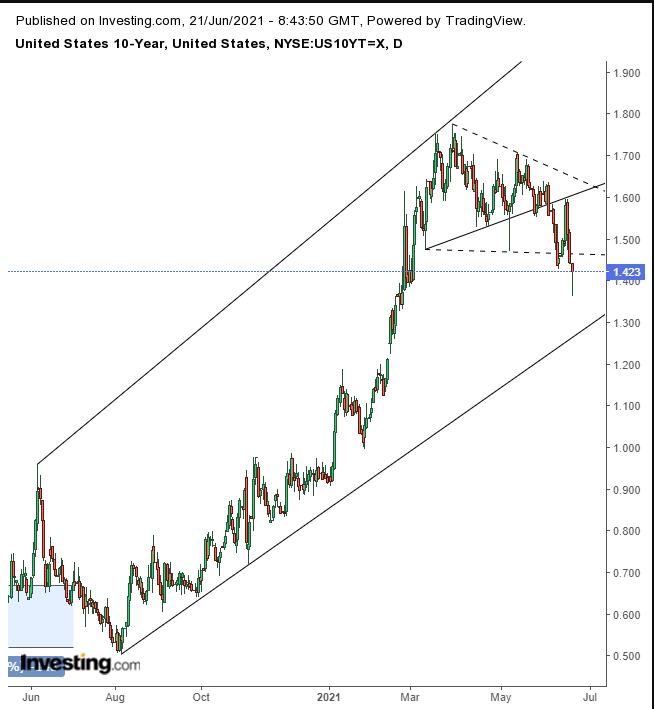 The yield curve, measuring the spread between the 10- and 30-year yields, is the flattest since February.

10-year yields produced a hammer, a bullish signal, especially having neared the bottom of a rising channel, which could be the technical trigger that supports Wells Fargo’s forecast that 10-year yields will cross over the 2% mark in the coming months.

The is at a fundamental and technical crossroads. Will it resume the massive falling channel since the 2020 peak—whose upside breakout was also a medium-term rising wedge—completing a double bottom, if it crosses over the 93.44, Mar. 31 high? 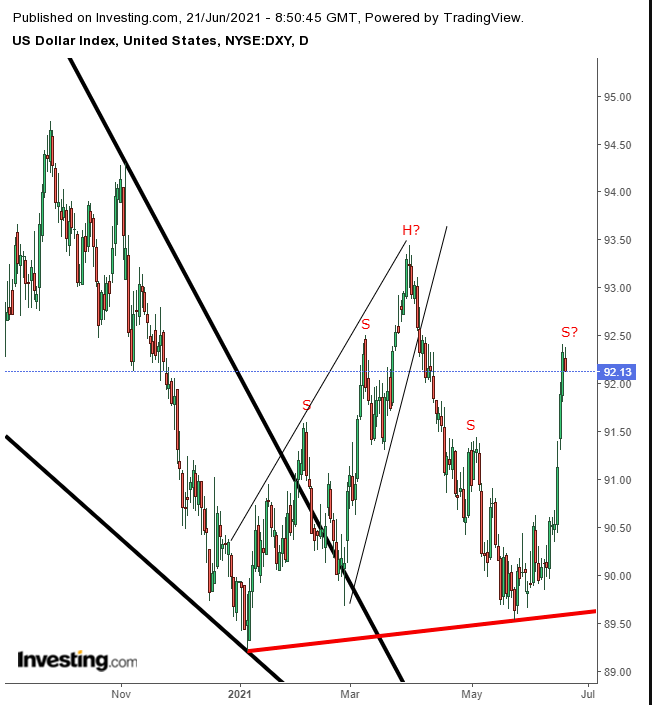 Alternatively, will the inflation outlook push it below the two bottoms, a potential neckline of a large H&S continuation pattern, required to take on the 2018 low to 2014 levels?

possesses a strong negative correlation with the dollar and has found support by its long-term uptrend line since May 2019. It may also be forming a H&S bottom, after falling back into the yellow metal’s falling channel since the August 2020 record peak. 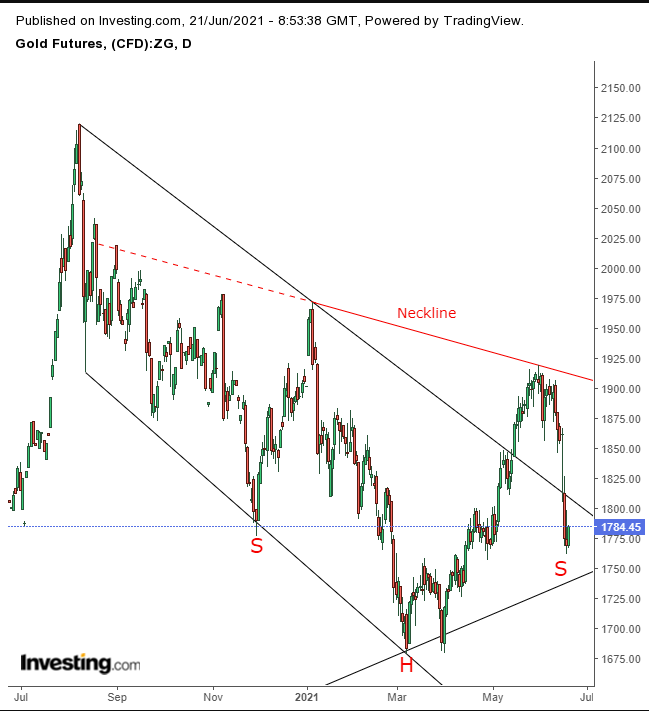 China intensified its crypto mining crackdown, pushing to the lowest level since Jan. 27.

The digital token found support from the lows since May. 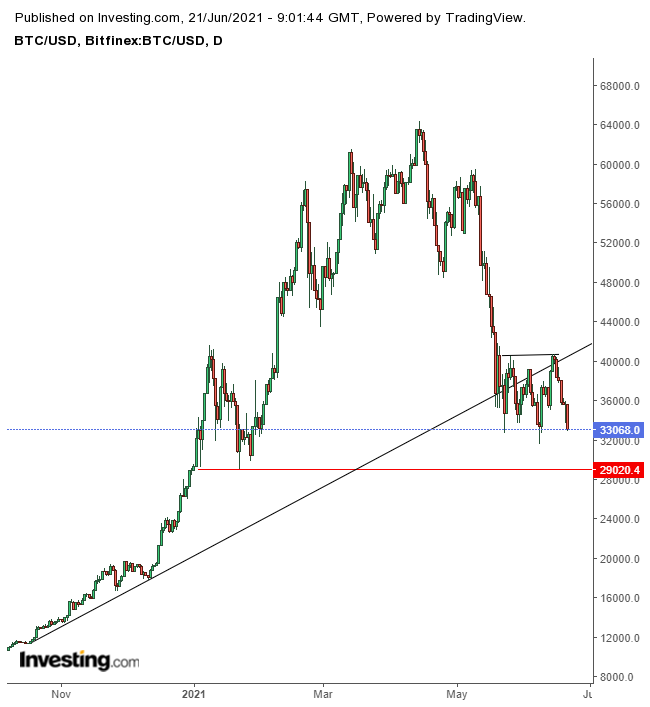 If the price rebounds back above $41,000, we could anticipate the digital coin to test the April highs again. On the other hand, if BTC slips below $29,000 we expect it could fall considerably lower.

slipped below $72, as US-Iran nuclear negotiations meandered, with the price fluctuating according to speculation on the timeline of Iranian oil’s return to market. 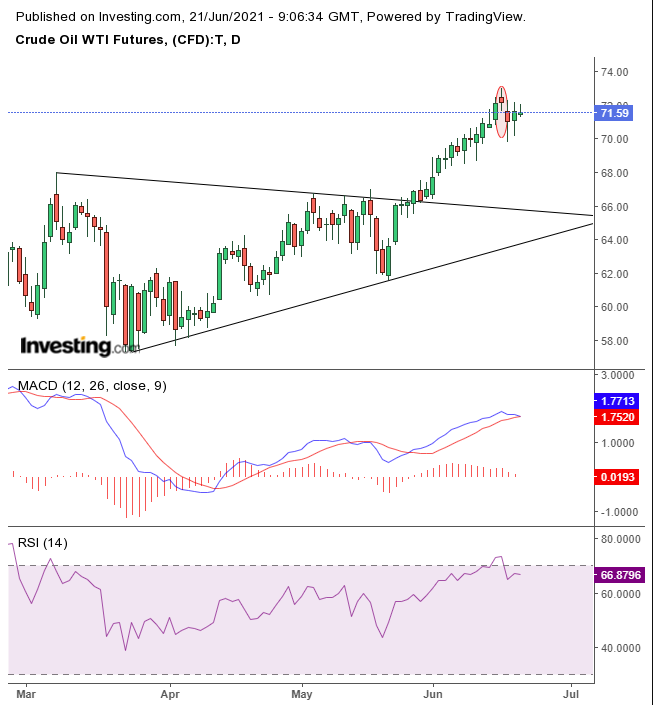 Oil prices will have to move above $73 to break the Evening Star, increasing the risk of a dip toward a bullish triangle. The RSI may have already topped out, as the MACD’s short MA tests a bearish cross.