European stocks opened higher and kept climbing this morning, while futures on the , and extended yesterday’s slide, in line with earlier Asian losses. Safe haven assets were mixed, with the falling, allowing the to climb, even as Treasury yields were falling.

Gains in builders shares helped the hold onto positive territory, though the pan-European benchmark slightly pared an early 0.7 climb. (LON:) edged higher on positive earnings, while (DE:) stock was sold off after softer revenue guidance.

During the earlier Asian session, a rebound for China’s (+0.33 percent) from a 0.55 percent decline and for Japan’s (+ 0.08 percent) from a 0.73 percent fall—to the lowest level since mid-September 2017—spared the from entering a bear market.

Most US stocks closed lower for the fifth day on Tuesday, even after dip buyers almost wiped out losses. Safe haven assets such as the yen, and US Treasurys followed an opposite trajectory, as investors back-pedaled into equities.

The closed 0.42 percent lower, after rebounding from a 2.79 percent slump and entering “correction territory.” The term “correction” in this context refers to when stocks fall at least 10 percent from a peak: while the designation can be seen as arbitrary, it nevertheless creates a panic that may cause a self-fulfilling prophecy of further selloffs. However, the truth of the term would need to be based on a closing level. After yesterday’s close, the NASDAQ decline from its August 30 peak is only 8.55 percent.

From an individual stock perspective, (NYSE:) and (NYSE:) advanced on solid results, while (NASDAQ:) led gains in tech shares. Industrial stocks remained under pressure after disappointing results from (NYSE:) and (NYSE:) added to worries that rising materials costs would erode profit margins.

The underperformed, closing 0.9 percent lower and erasing all its year-to-date gains. Technically speaking, using the strictest interpretation, all major US indices joined the in a downtrend.

Why are investors cashing out of small cap stocks, if one of the main headwinds for equities at present is the same trade war that had previously favored these domestically focused companies over their larger cap multinational counterparts? Perhaps, small cap selloffs are justified by the fact that when markets top out, traders shed speculative stocks first. Overall, yesterday’s underperformance of small cap shares adds weight to the evidence of a market top.

As mentioned earlier, all US majors have now registered the second lower trough in a series of descending peaks and troughs, establishing a new downtrend. There is an argument among technicians, however, about what constitutes a valid peak and trough.

While some only consider closing prices, purists examine the entirety of the price action. Yesterday’s lows registered the second trough in a downtrend, but some would argue that the bulls’ ability to push prices back above the previous, October 11 trough, demonstrates strength, and that only a lower close would confirm a lower trough. While conservative traders may wait for that trend reversal confirmation, aggressive traders may act now, relying on the weight of the evidence. Except for the Dow, all major averages closed below their respective uptrend lines since the previous correction February 2016, as well as the 200 DMA. 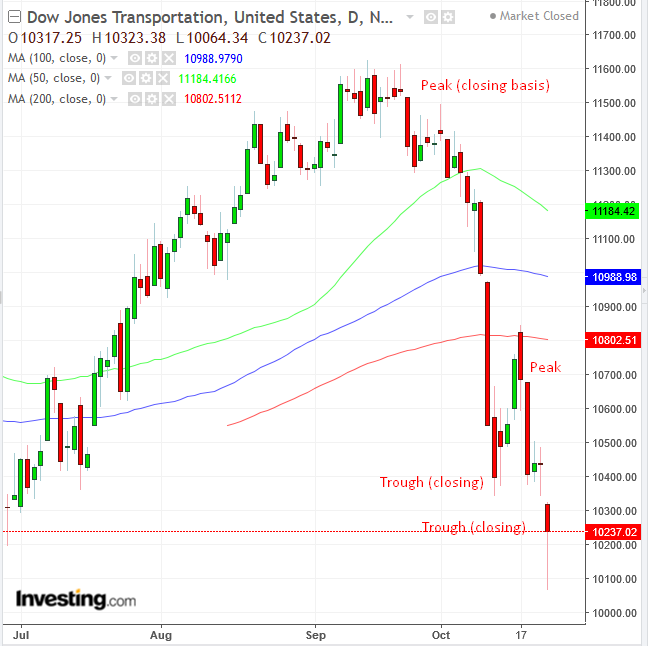 Note, the index did register a second, lower trough on a closing basis. According to the Dow Theory, when both the Dow Jones Industrial Average and the Transpiration Average confirm a trend reversal on a closing basis, an official reversal has been established. 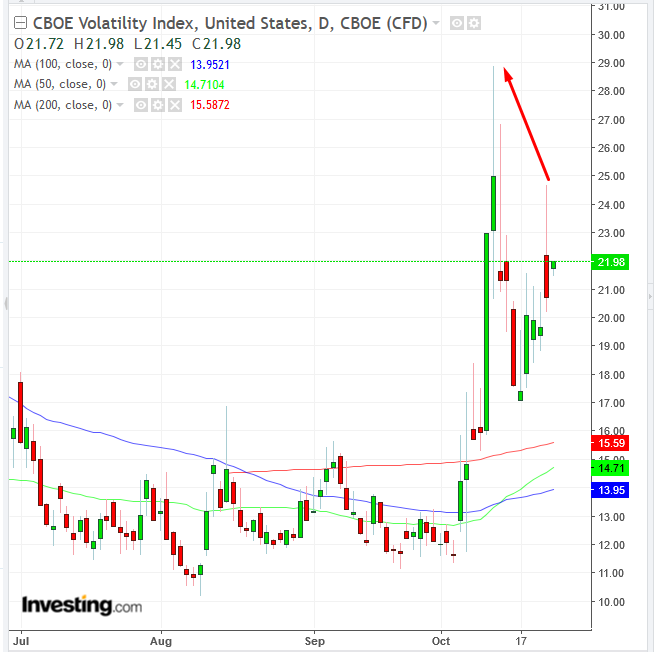 The surged, though it was nowhere near the heights seen during the selloff earlier in the month, suggesting a lack of consensus on future market volatility, and by extension, further declines. 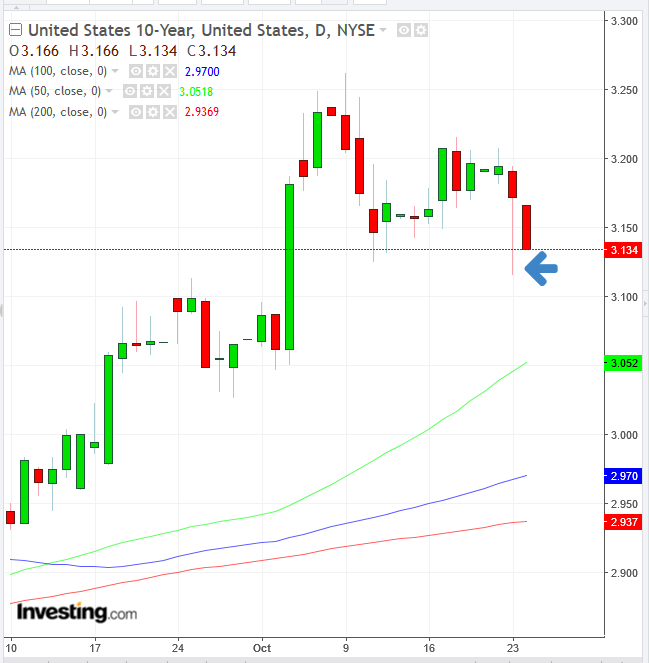 US Treasurys confirm that investors are still in risk off mode, as yields on the note slipped back below 3.140. They’ve been trading at the day’s lows during the European morning session, eyeing yesterday’s lows of 3.115. 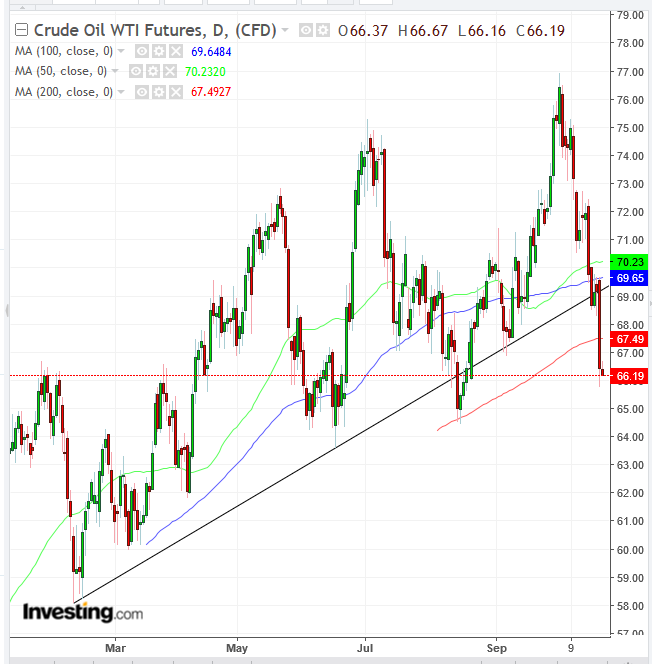 touched the lowest level in almost two months on a pledge by Saudi Arabia to meet any shortfall that may materialize from Iranian sanctions. Technically, the price fell below the uptrend line since February 9, again, as well as below the 200 DMA. The next presumed support is the August 16, $64.43 low.