US futures on the , , were trading lower ahead of the US open on Wednesday, while futures on the were in the green. European stocks also traded higher as robust European earnings outweighed geopolitical risk, the continued rapid spread of coronavirus in India and vaccine rollout hiccups.

The dollar traded higher but Bitcoin was under pressure again.

Russell 2000 futures were comfortably over half a percent into positive territory at the time of writing but in stark contrast, contracts on the NASDAQ 100 were almost 0.15% in the red, illustrating that the reflation trade is back on the table as Tuesday’s technology selloff resumes.

In stark contrast to US futures, in Europe the Index was led higher by the technology and energy sectors. Dutch chip-equipment maker ASML Holdings (AS:) jumped 4.5% after it it expects 2021 revenue growth of about 30% from a year ago, compared to a previous target of “double-digit” growth. Swiss drugmaker Roche Holding (SIX:) also rose after prospects for new medicines overshadowed a drop in first-quarter .

Investors are caught in the crosscurrent of earnings expectations forecasting a powerful recovery and the ongoing spread of the coronavirus at an alarming rate across the developing world. Traders decided to play it safe for now and cash out at record prices as the threat of new lockdowns, that could be a stick in the wheel of recovery, increases.

For the first time since Mar. 24 US stocks fell on back-to-back days. The Index extended a decline from an all-time high, showing signs of fatigue ahead of potential surprises in US corporate results.

Shares in International Business Machines (NYSE:) climbed after its largest revenue growth in 11 quarters, while United Airlines (NASDAQ:) outpaced a selloff in travel stocks on a bigger-than-expected . Netflix (NASDAQ:) plunged in postmarket trading as its subscriber growth fell short of the average analyst estimate.

Johnson & Johnson (NYSE:)  stronger-than-expected sales, while Travelers (NYSE:) beat estimates and Philip Morris International (NYSE:) its earnings outlook, despite news that the White House may limit nicotine levels in cigarettes. The stock regained Monday’s losses and then some.

Procter & Gamble (NYSE:) that it will boost prices for consumer products, as the household-goods giant passes on rising commodity costs to customers, another potential driver of an increase in inflation.

is one of the most watched metrics at the moment as investors question how companies will deal with rising prices and remain profitable when inflation has been almost extinct since the 2008 financial crash. Yields on the Treasury note have resumed along their rising flag. 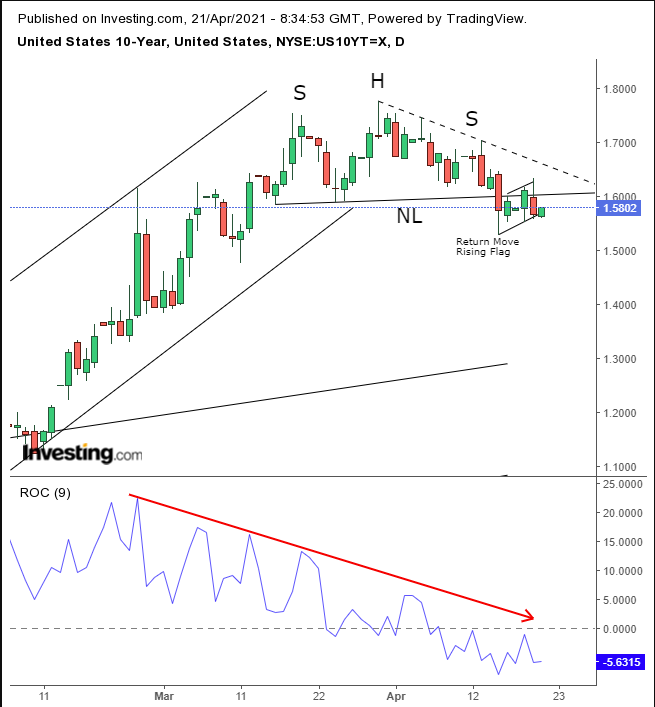 The return move to a top reflects investor indecision.

Rising yields pulled up the , which is still in a downtrend, after having completed a rising wedge. 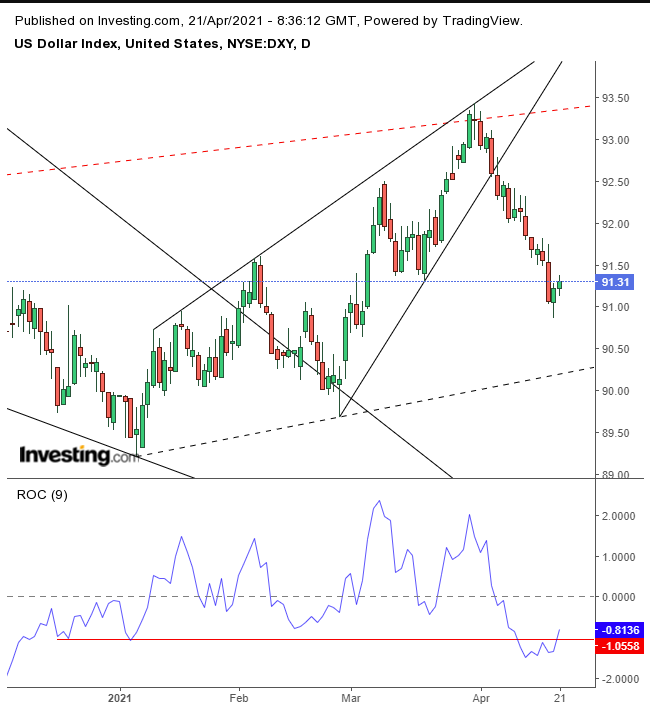 We are waiting to see whether the larger wedge from the March top will hold.

managed to climb despite rising yields and the higher dollar, which is like swimming against the yield stream. We can only conclude that the yellow metal’s performance is driven by technicals, after it completed a double bottom. 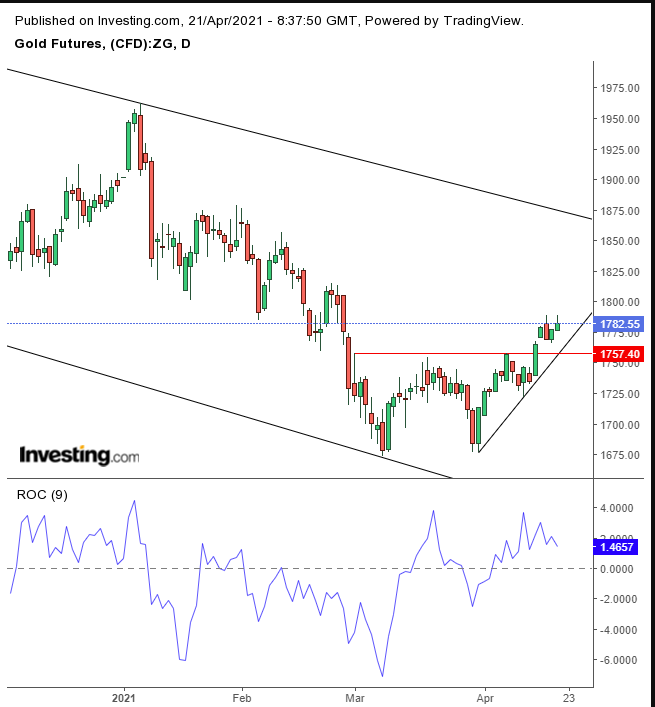 Still, the precious metal was trading higher though it’s still within a bearish channel

continued its slide, but remained within a holding pattern after completing a bearish wedge. 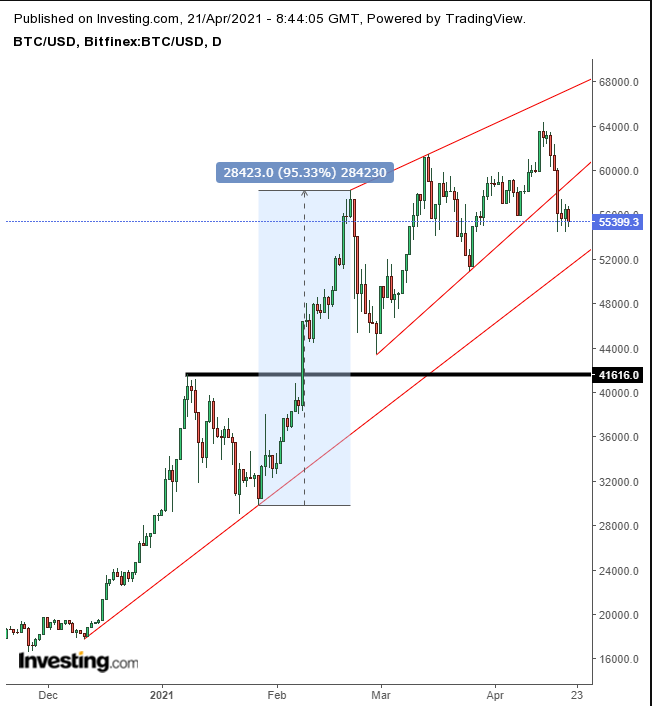 The direction of the breakout can indicate the trajectory of the next move. Beware, that an advance can be a return move to retest the pattern before a continued move lower, to retest the uptrend line.

was falling for the second day as the resurgence of COVID-19 blew some of the wind out of the global recovery’s sails. 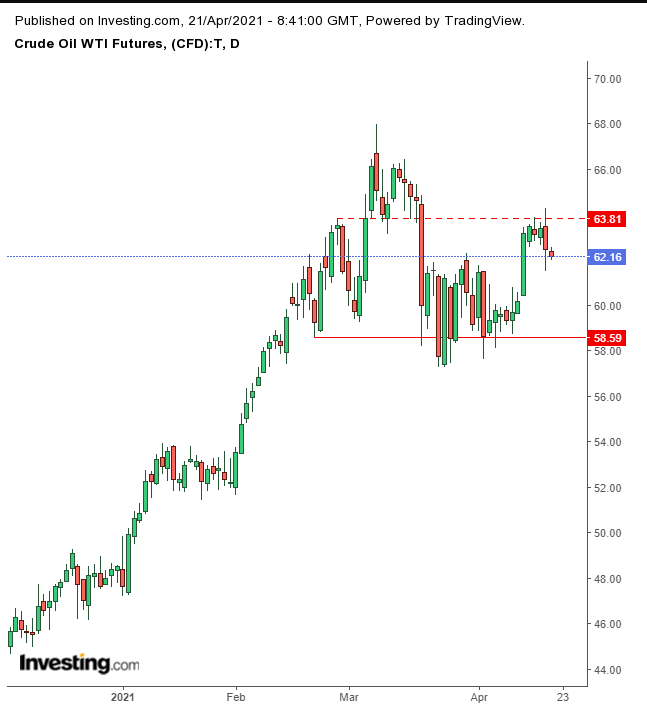 From a technical perspective, the left shoulder provided resistance, increasing the chances of a H&S top.