US futures for the , , and , advanced on Tuesday along with global stocks, as market focus shifted from US-China tensions to reopening economies and that the worst of the downturn could be over.

The dollar weakened and yields rose. The yen declined, but gold pushed higher. Oil gave up an advance, slipping just below the $35 level.

Contracts on all four main US indices extended Friday’s advance for their underlying benchmarks this morning. S&P 500 futures struggled below the 200 DMA, reaching the highest levels since March 5.

After the long holiday weekend in the US, investors are rested and ready to challenge record highs, and willing to look past the economic devastation wrought by the COVID-19 pandemic and the uncertainty from rising tensions between the world’s two largest economies. Instead markets are currently concentrating on the unprecedented government stimulus already declared and the hope of a powerful recovery.

Contracts on the NASDAQ climbed to their highest level since Feb. 20 on Tuesday, when they hit an all-time high. 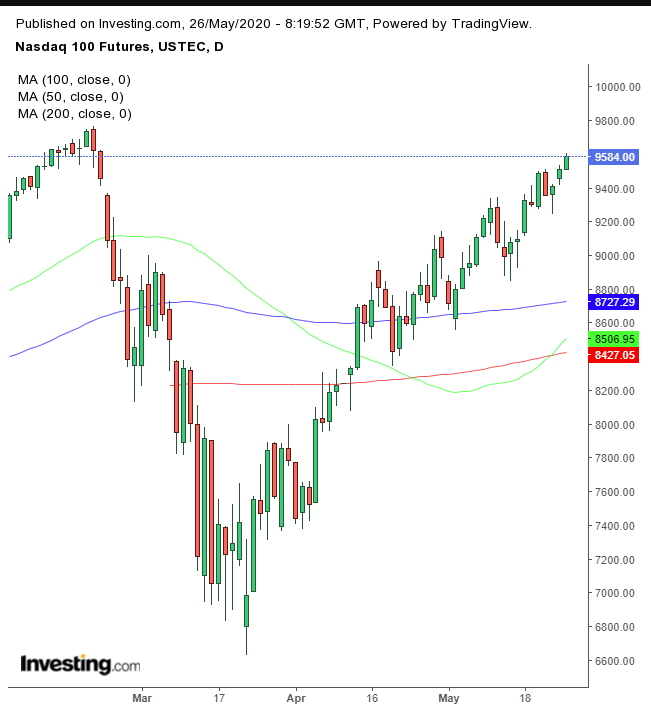 As well, today, its 50 DMA crossed above the 200 DMA, triggering a Golden Cross.

The opened 1.2% higher, buoyed by all 11 sectors, to the highest since March 6, as Germany recorded a decline in the number of corona virus cases. UK Prime Minister Boris Johnson for getting back to business, including reopening thousands of local shops, department stores and shopping centers next month, after which the surged +1.9%.

Asia was also completely green: Australia’s shined brightest, (+2.93%), on hopes of a global economic recovery. This marks the second consecutive session of at least 2% gains for the benchmark down under.

Japan’s also shot higher, (+2.55%), as the world’s third-largest economy lifted its state of emergency. Even China’s , which underperformed other regional benchmarks, advanced by a respectable +1%.

Wall Street was closed on Monday in honor of Memorial Day in the US. And though trading last week was , bulls had the final word as the and closed higher ahead of the long weekend.

Momentum seems to be to the upside, as bullish investors focus on the half glass full. Nevertheless, bears that the glass is half empty, or maybe even broken.

Yields, including for the US Treasury benchmark note, jumped as investors once again embraced risk. 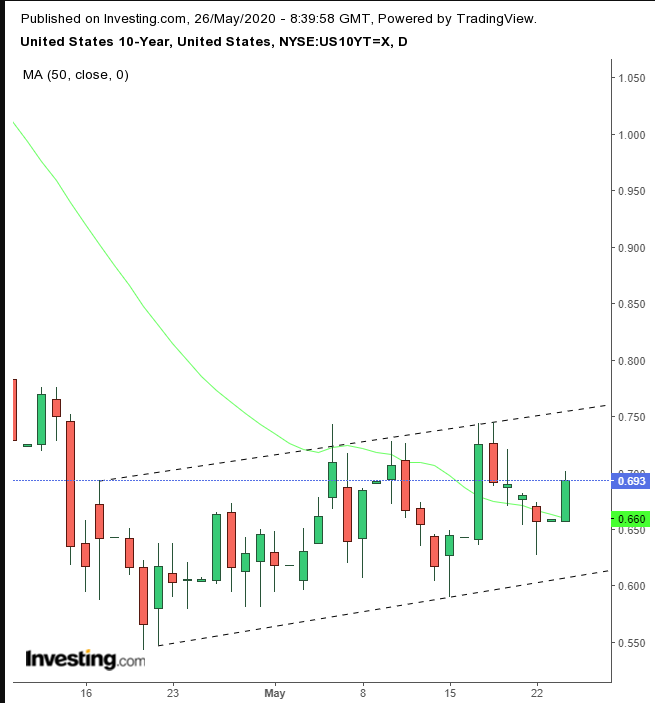 From a technical perspective, rates are ranging with an upward bias, as they climbed back above the 50 DMA. 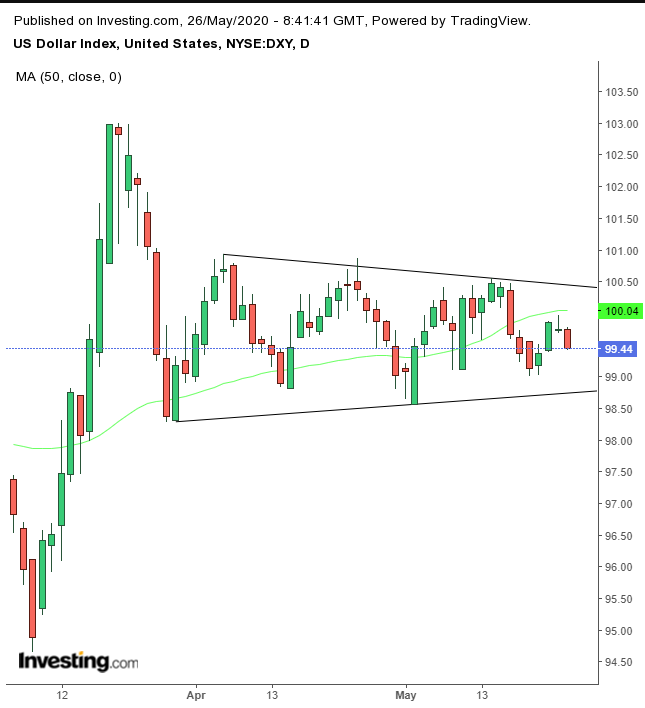 Technically, the greenback is trapped within a sideways pattern, as eager traders wait for a breakout before picking a direction.

was flat, considered a positive sign amid a shift to risk-on from markets when US futures and global stocks advance. 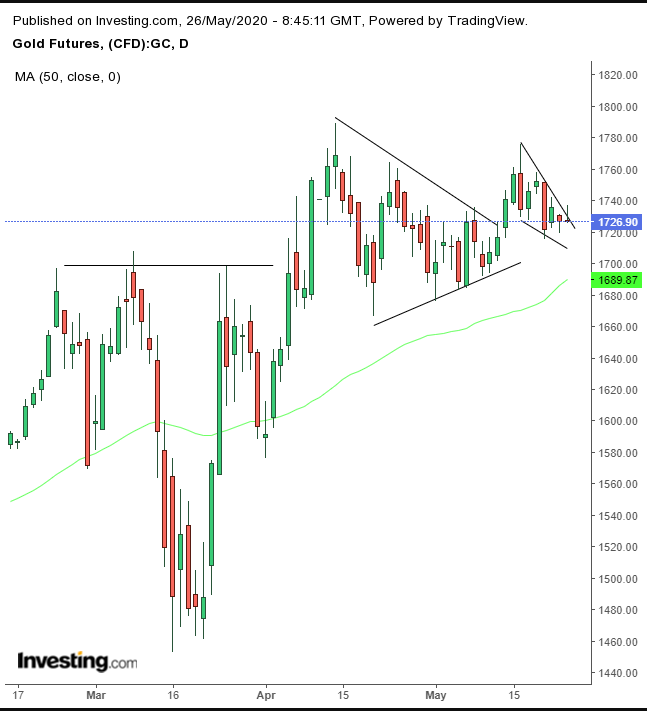 In part, the yellow metal hasn’t sold off thanks to dollar weakness. Technically, the precious metal gave up its daily highs, as it found resistance by the top of a falling flag—the third consecutive bullish pattern for the precious metal since February.

is rising for a second day. 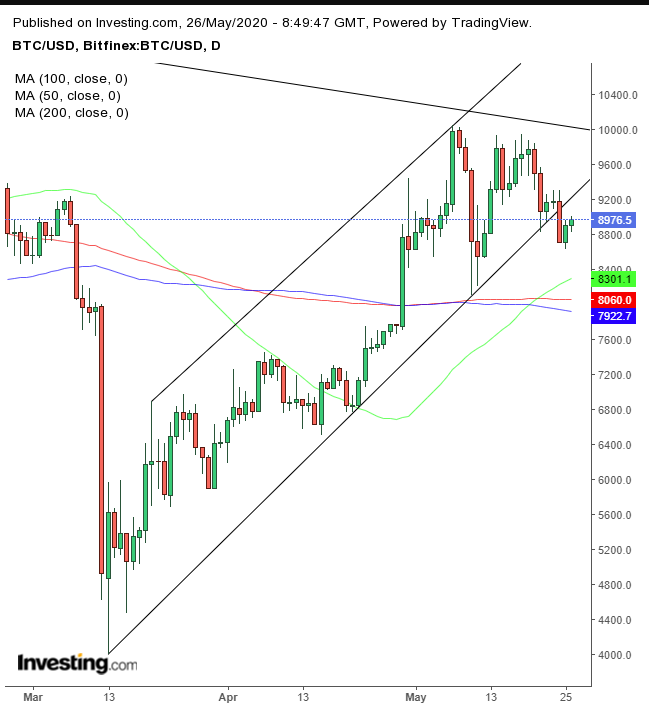 However, while its 50 DMA crossed above its 200 DMA, triggering a golden cross, the cryptocurrency fell below its uptrend line since the March low, giving more power to its longer-term downtrend line since June. Nevertheless there are some high profile investors who believe that BTC will .

has given up session highs at the time of writing, and is flat with yesterday’s close. 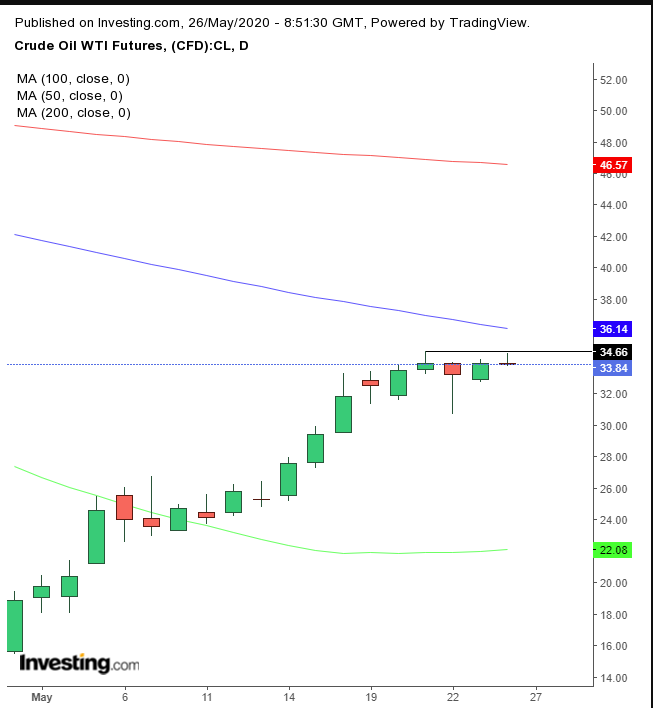 Technically, the commodity confirmed the May 21 shooting star’s resistance, bolstering our case for a pullback, which we described in Sunday’s post (link above).