Having rallied during the Asian session, futures on the retreated, along with European shares on Thursday ahead of the US open. The , and futures were all trading slightly higher.

Treasuries and the dollar gained ahead of the key US inflation report, which may help traders gauge the Fed’s next move.

US contracts were topping out on the hourly charts, which can be clearly seen for the NASDAQ futures. 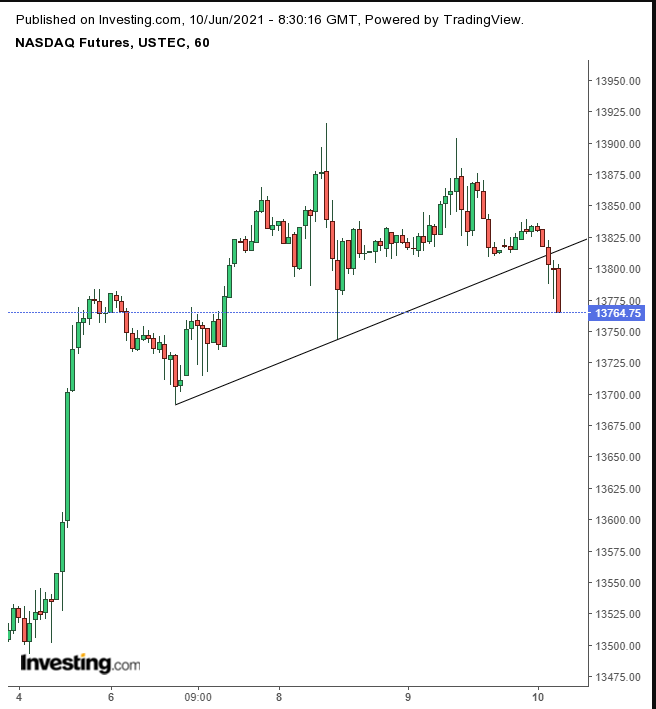 Energy and automakers pulled European shares lower, ending a winning streak, ahead of the European Central Bank and today when the bank will outline its outlook on the currently economic recovery and inflation. The Index declined 0.1% on Wednesday, capping a four day long rally. 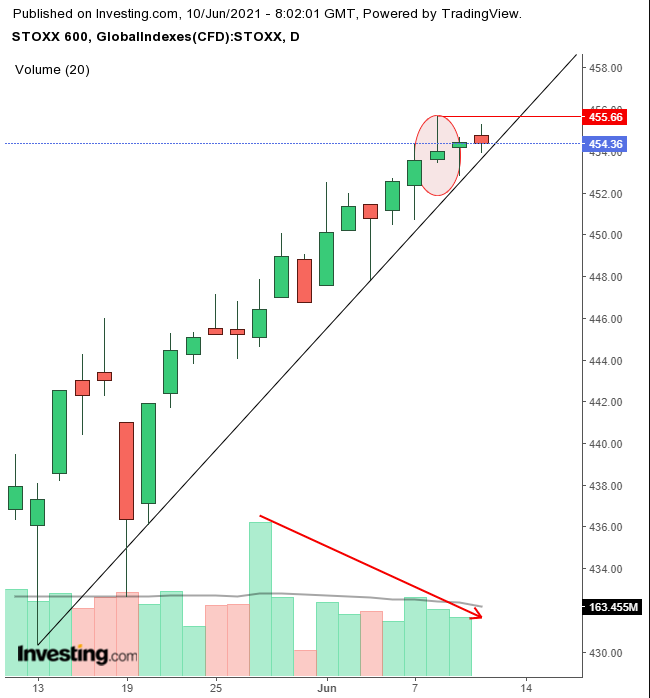 The pan-European benchmark opened higher before retreating. Investors are clearly in a wait-and-see mode. From a technical perspective, the stock is squeezed between Tuesday’s shooting star—on the highest volume in over a week—and the uptrend line’s support. Meanwhile, volume has been diminishing as the price moved higher.

A 2.2% hike in shares of BT (LON:) helped push the into positive territory. US broadband provider Altice (NYSE:) announced that it has bought a 12.1% stake in the UK’s largest broadband and mobile operator.

fell 0.3% following a three-day selloff for a total loss of 0.7%. A weaker pound renders UK exports cheaper for overseas buyers which is important for the UK as exports slumped after Brexit in January and are slowly recovering. 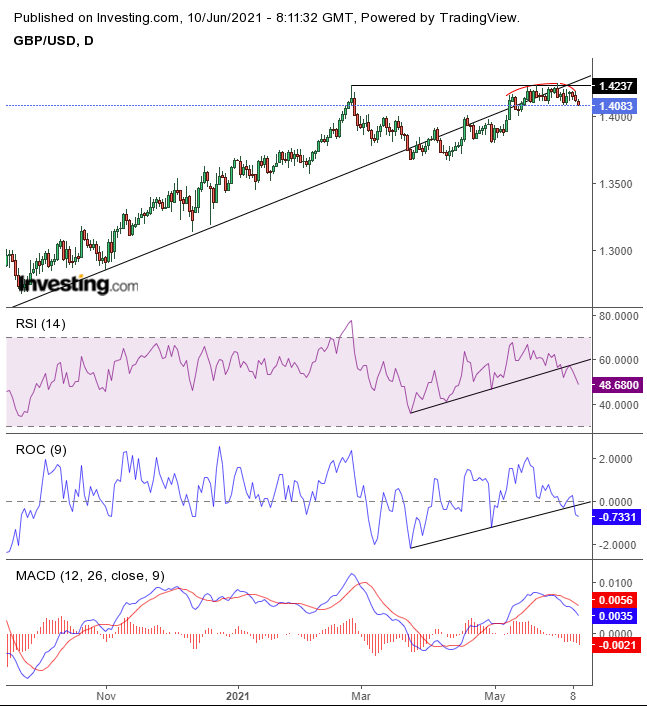 The UK currency appears to be forming a small rounding top, which could be part of a larger, double top.

French digital music company Believe (PA:), which helps to distribute music via deals with platforms, such as, Spotify (NYSE:) and Apple (NASDAQ:), dropped 10.2% in its stock market debut.

All Asian benchmarks except for Hong Kong’s (-0.1%) climbed, amid talks between the US and China.

In their first phone meeting since President Joseph Biden assumed office, American and Chinese commerce ministers agreed to promote trade and investment ties. The call came after the President ordered a review of Chinese software apps, TikTok and WeChat, revoking former President Donald Trump’s bans. The move may have helped to improve relations between the US and China.

The rangebound trading that has characterized the start of June may be about to get some direction as investors seek clues about fiscal and monetary stimulus from key meetings. In addition to the US report and ECB meeting today, leaders of the Group of Seven (G7) nations are gathering in the British seaside village of St. Ives, Cornwall, many of them for the first time since the coronavirus pandemic started.

The Treasury yield remained below 1.5%, signaling support for the view that the rebound from the pandemic will stoke only a transient bout of elevated inflation. 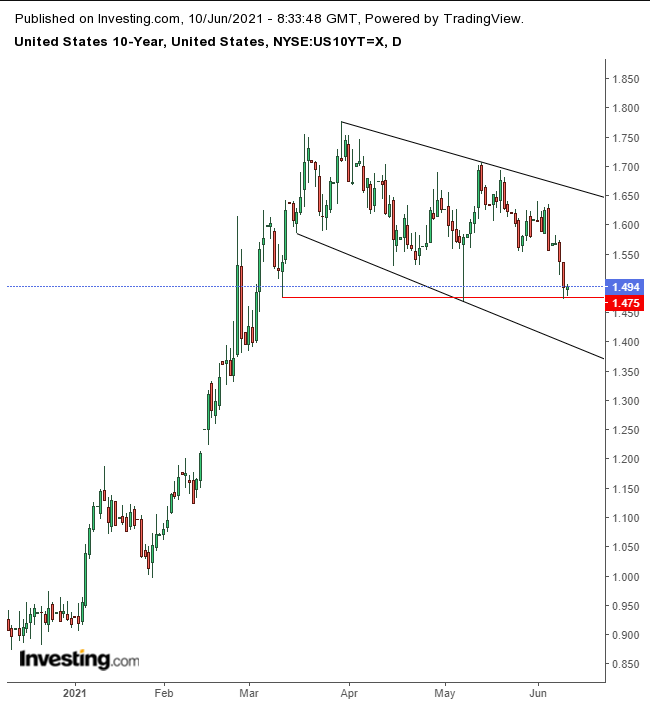 While rates fell below 1.5% for the first time since Mar. 3, they rebounded off the support of a descending triangle. If yields continue along their falling channel, they will complete the descending triangle, suggesting a drop to 1.2%. 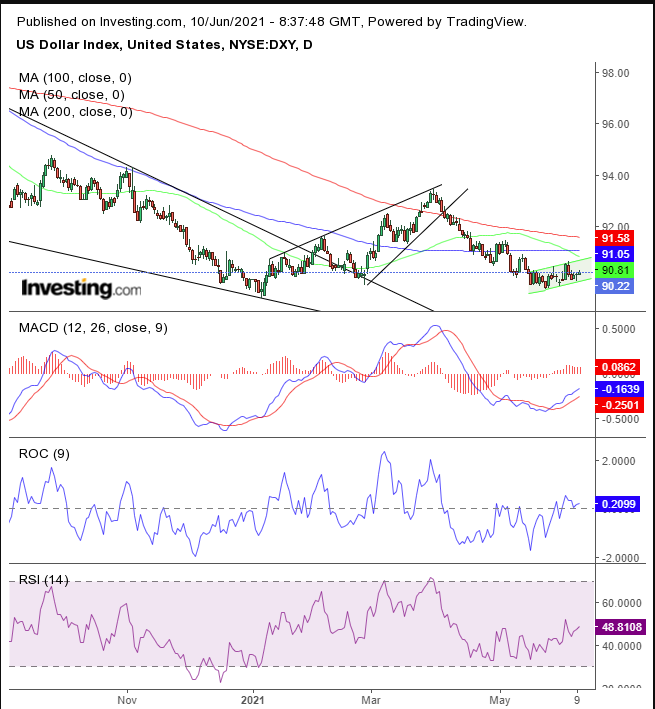 The gained for the third day within a narrow rising channel, which has the potential of turning into a bearish flag with a downside breakout. A break below 89.00 will turn us bearish. Except for the bearish moving averages, the other indicators are bullish, suggesting the recent, small wedge is down, and the greenback can follow through with an uptrend after the massive falling wedge since the 2020 peak.

is retesting the bottom of a rising channel, supported by the 200 DMA. 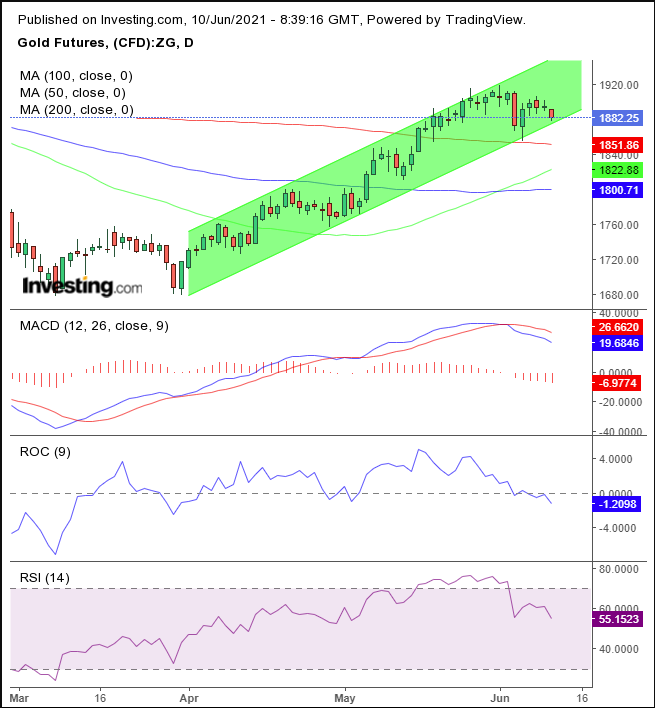 The remaining indicators are bearish. 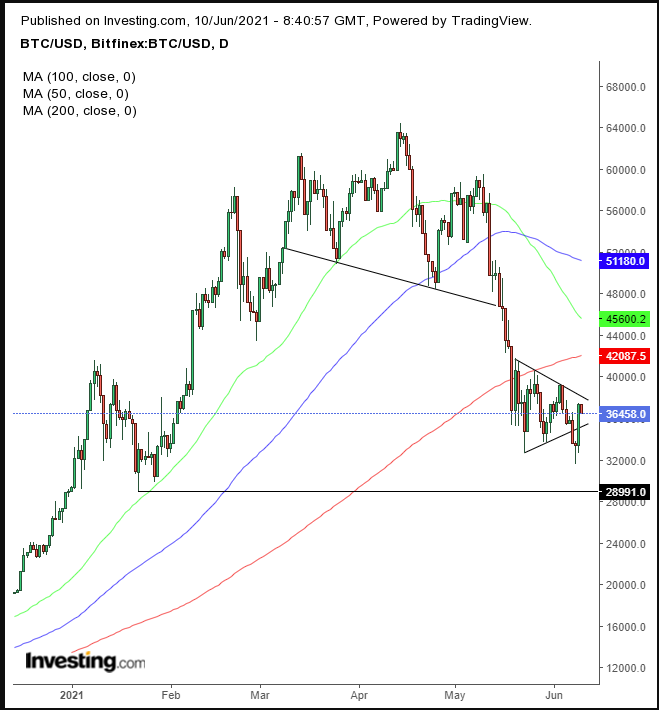 The cryptocurrency again found resistance at the top of a potentially bearish pennant after jumping right back into it.

slipped amid an increase in US . Although oil prices have been moving higher recently, traders are closely watching the ongoing talks between the US and Iran as additional supply from Iran may impact prices. 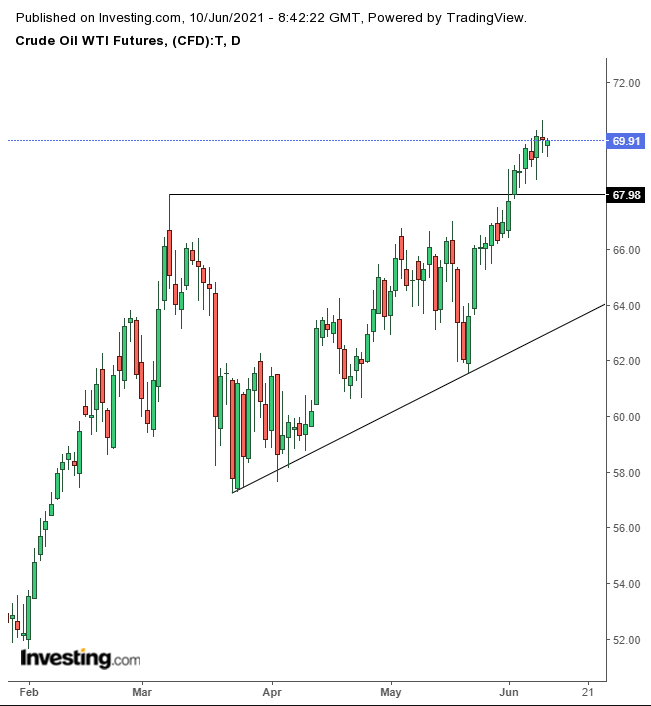 We consider the decline as the aftermath of a bullish breakout to an ascending triangle.