European stocks and futures on the , and edged higher this morning, extending a rally to a fifth straight day on speculation the Fed will reinforce its recent dovish posture, following in the footsteps of China’s policy easing to reign in an economic downturn.

The opened 0.08% higher and extended the climb to over 0.6% by the late morning session, trading at the highest level since Oct. 4 and less than 1% below the Sept. 27 peak.

Meanwhile, U.K. Prime Minister Theresa May saw a vote on her Brexit deal, tentatively scheduled for this week, being blocked by Speaker of the House of Commons John Bercow, who announced yesterday the plan would have to be reworked before it can be put forward to parliament for approval. 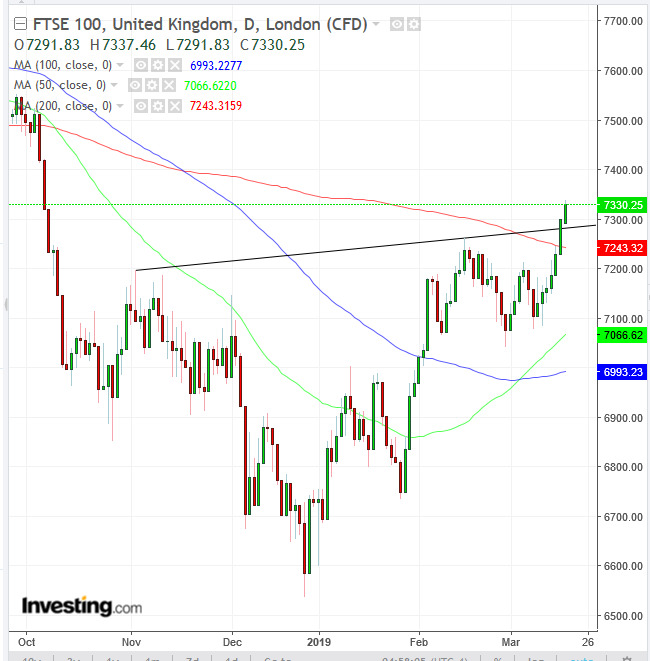 The development didn’t seem to have a lasting adverse impact on British assets, with the rebounding from a post-announcement dip and the climbing for the seventh consecutive session. Technically, the index extended an upside breakout through the 200 DMA and the neckline of a massive H&S bottom ranging from November.

In the earlier Asian session, most regional benchmarks slid lower amid thin trading, ahead of a potentially pivotal , in which policy makers could confirm, or deny, a policy shift toward accommodation. 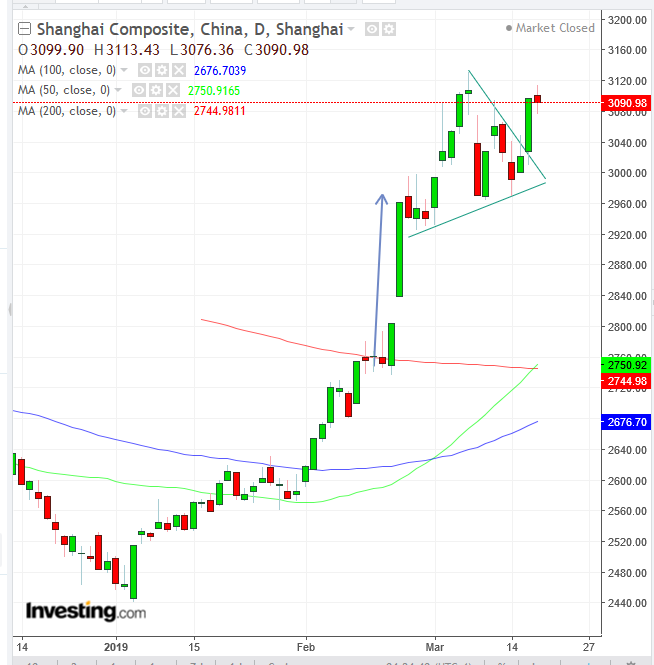 China’s (-0.18%) underperformed. The decline was most likely driven by profit-taking after Monday’s 2.47% surge, which was prompted by Chinese officials’ aggressive economic stimulus. The marginal setback was probably also caused by speculation the U.S. policymakers will channel the same dovishness as their Chinese counterparts, as the trade dispute between the two countries, which is at the center of a global slowdown, remains unresolved. Technically, the Chinese gauge may be correcting after an upside breakout of a pennant, bullish in an uptrend, especially after the 7.63% surge in the two days of Feb. 22 and Feb. 25 before the pattern development. Also, the 50 DMA crossed over the 200 DMA amid the pennant’s formation, triggering a Golden Cross.

Hong Kong’s (+0.19%) rebounded from an initial drop, which may also be due to profit-taking, after its 1.93% jump over the previous two sessions. However, Hong Kong shares are suffering from continued intervention, as the City’s monetary authority defend the ’s trading band peg to the USD, making local shares less attractive for foreign investors.

In yesterday’s U.S. session, stocks extended last week’s rally. The added 0.37%, helped mainly by (+1.39%), which tracked surging oil prices, (+1.01%) and (+0.97%). (-0.85%) held the index back from sealing more substantial gains. Technically, the SPX reached the highest level since Oct. 9, extending the short-term uptrend since the December bottom, while the medium-term trend remains trendless, potentially developing a H&S top or Broadening Pattern.

The climbed 0.25%, underperforming its U.S. peers, while the outperformed, gaining 0.67% and closing above the March 13 high—though it remained below the late February highs, guarded by the 200 DMA. Why would small caps outperform and mega caps lag, in a context of scarce trade developments? 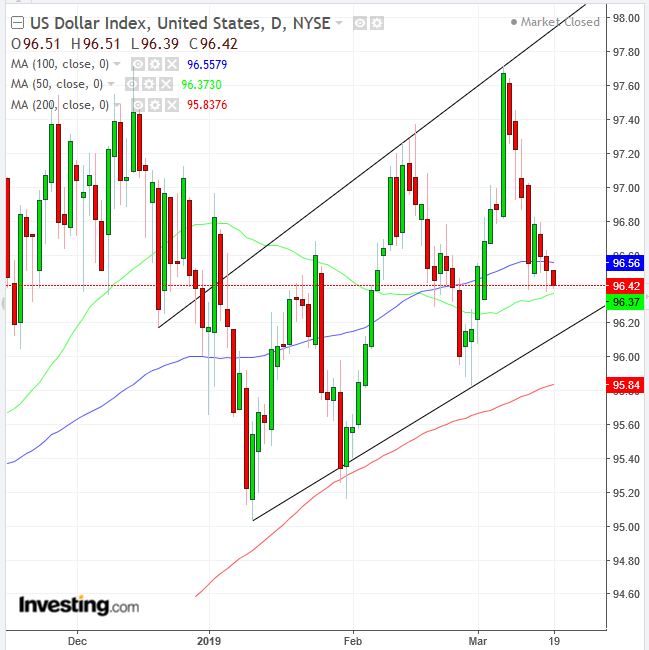 Small-cap stocks tend to gain traction with higher inflation, as a strengthening poses a headwind to multinational companies. Perhaps, this ongoing negative correlation between mega- and small-cap shares may be a leading signal for rising inflation, and with it, for a strengthening dollar, even as the greenback is falling for the third day on Tuesday. Technically, the Dollar Index has reached the bottom of a congestion since Wednesday, above the bottom of an ascending channel, supported by the 200 DMA, suggesting the buck will, in fact, rise.

On the other hand, yields on Treasurys have completed a bearish pattern, after falling below their uptrend line since July 2016, potentially signaling that investors don’t, in fact, , or they wouldn’t invest into newer bonds. Still, traders might consider Treasurys to be the lesser of two evils between bonds and equities, with the longest bull stock market in history entering its eleventh year and a slew of potential headwinds clouding its outlook. 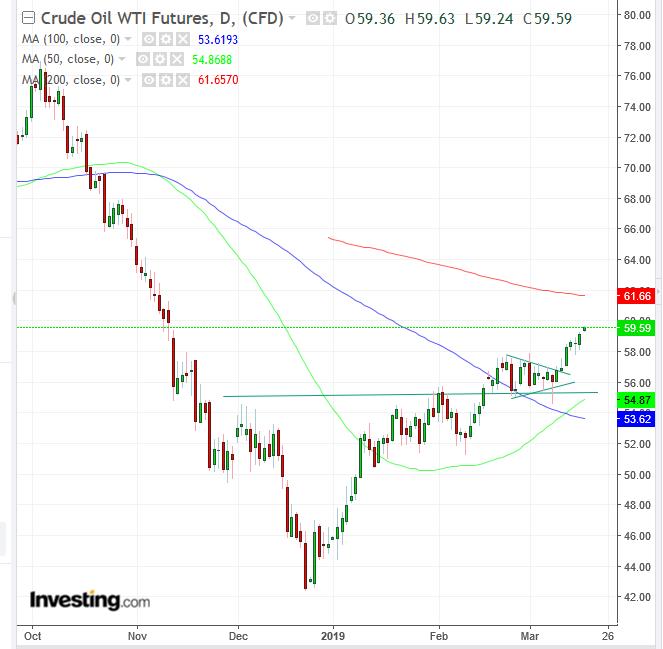 reached a near four-month high as OPEC+ producers decided to extend supply cuts till their June meeting, when they will revisit the subject. Saudi Arabia has in fact announced there won’t be a summit in April, raising questions over the decision to delay discussions on output. Technically, U.S. crude climbed for the sixth day out of seven, after completing a pennant, following a H&S bottom. The next test would be the 200 DMA, above $61.