The fell in tandem with US Treasurys, which took a temporary beating on Wednesday as investors pondered the potential repercussions of the US midterm election results. Futures on the , and , along with European shares climbed higher, shaking off weakness from the Asian session.

Investors initially rotated out of Treasurys, pushing yields on notes higher, after US Republicans lost control of the House of Representatives, making it more difficult for the Trump Administration to enact business-friendly fiscal measures. While the outcome of the US election was partly priced in by traders, the result has introduced uncertainty into markets that have benefited from the prospect business focused fiscal policies that might have also triggered higher yields. US yields eased by the European morning session. 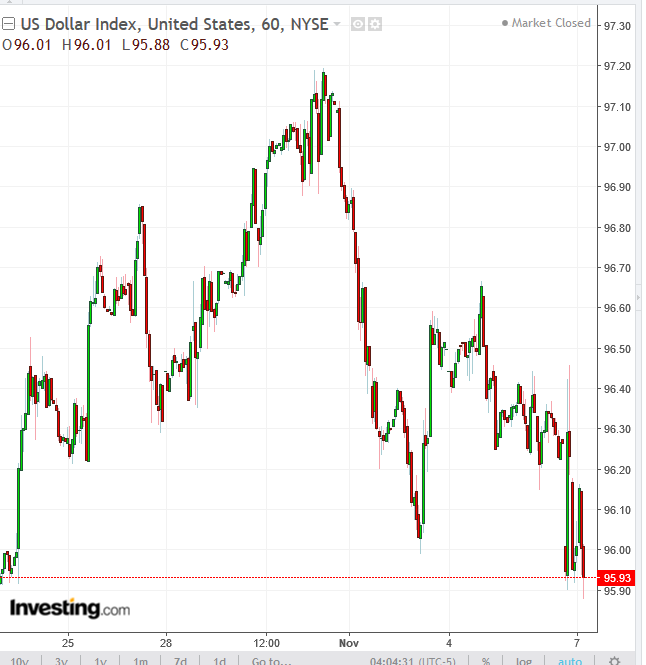 The greenback also took a hit from falling demand from foreign investors for USD-denominated Treasurys. The currency’s slide continued even as Treasury demand regained some ground.

The reached a three-day high, helped by some positive earnings reports as well as soaring Spanish bank stocks, after the Southern European country’s Supreme Court ruled that lending institutions will not be required to pay stamp duty on mortgages, thereby boosting prospects for profits.

US investors took a wait-and-see approach yesterday, bracing for an adverse market reaction to a shift in the political equilibrium. Shares in both the Materials and Industrials sectors—the most sensitive to trade risk due to companies’ reliance on exports—outperformed.

The , whose listed multinational firms also rely on overseas markets, outperformed as well, ticking 0.68 percent higher. From a technical perspective, the megacap index reached the highest level in almost three weeks and closed very near the height of the session in a sign of bullish dominance. It also climbed back above the 100 DMA, after crossing above the uptrend line since the previous correction in early 2016. It earlier also crossed back above the 200 DMA.

The gained 0.63 percent, with all sectors comfortably in positive territory. shares lagged (+0.47 percent), following ‘s seventh straight daily slide yesterday on the improved global supply outlook—though the price of WTI was seen rebounding this morning. outperformed (+1.64 percent) and came in second (+1.05 percent). Technically, while the SPX reached the highest level in over two weeks on a closing basis—very near the top of the session in a sign that bulls found little resistance—unlike the Dow, it failed to cross back above the uptrend line since the February 2016 bottom and the 200 DMA and even fell short of closing above Friday’s intraday high.

The inched 0.64 percent higher. From a technical standpoint, the tech-heavy index may be even weaker than the S&P 500, as it slipped off the highs of the session. Also, not only it failed to return above the 200 DMA, but its 50 DMA fell below its 100 DMA—a bearish technical signal. As well, its gains remained within a two-day climb.

The underperformed, ending 0.47 percent in the green. Technically, it gave up from its intraday high but closed at the highest in almost three weeks. On the other hand, it is about 4 percent below its uptrend line since the end of the January-2016 correction and the 200 DMA. As well, the 50 DMA crossed below the 100 DMA, and is falling toward the 200 DMA.