European indices and US futures on the , and rallied in Tuesday’s early trade, pushing global shares higher after a mixed and volatile Asian session that was dominated by a jittery yuan.

Germany’s coalition government managed to avert a full-fledged breakup over the country’s migrant policies, helping both the and the pan-European to recover.

The continental benchmark index lost half of its 0.6 percent gains from Monday in the first 45 minutes of today’s trading, trimming yesterday’s advance to 0.15 percent as the index traded at the bottom of the session. However, it rebounded higher by 0.68 percent at the time of writing. US futures also lost steam but bounced back shortly after.

Earlier, during the Asian session, People’s Bank of China Governor Yi Gang intervened to rescue of the sinking yuan, saying the bank aims to keep the country’s currency at equilibrium and is keeping its recent devaluation under close look.

The renminbi slumped 5 percent in early trade, posting its 10th declining session out of 12, but trimmed losses down to 4.5 percent after Yi Gang’s statements.Technically, it settled precisely at the September 207 peak.

Japan’s reversed a 0.75 percent loss into a more manageable 0.15 percent slide—providing investors some reassurance after the 2 percent fall it posted on Monday.

However it was China’s that exhibited the most impressive rebound in the region, turning a 1.9 percent plunge into a 0.4 percent advance. While the benchmark jumped concurrently with the yuan amid signs of monetary policy intervention, its reversal was mainly bolstered by the country’s state media, which called the recent sell-off in mainland stock markets an “irrational overreaction” and urged investors to not magnify the ongoing trade tensions between China and the US.

Hong Kong’s underperformed, closing 1.3 percent in the red—though it trimmed a much steeper 3.25 percent plunge. Technically, the sharp rebound formed a mighty hammer above the 28,000 key support/resistance level since August 2017.

South Korea’s bounced back from a 0.8 percent setback to eke out gains of less than 0.05 percent. Australia’s outperformed again, climbing 0.5 percent. Technically, the Aussie index is in the making of a bullish pennant, whose downside breakout would fall below 6,180. 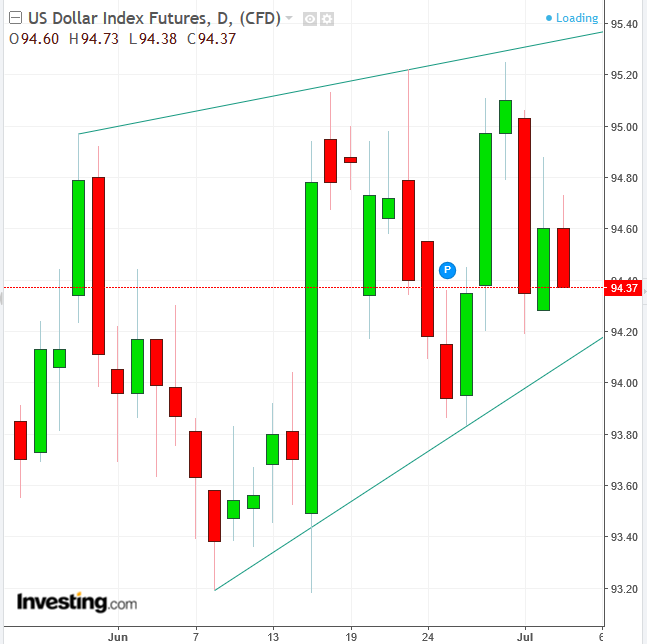 fell even against a rising US yields. Technically, the price is retesting the bottom of a rising channel since June 8. However, as the highs and lows converge, the channel may turn into a bearish, rising wedge, complete with a downside breakout, below the 94.00 level. 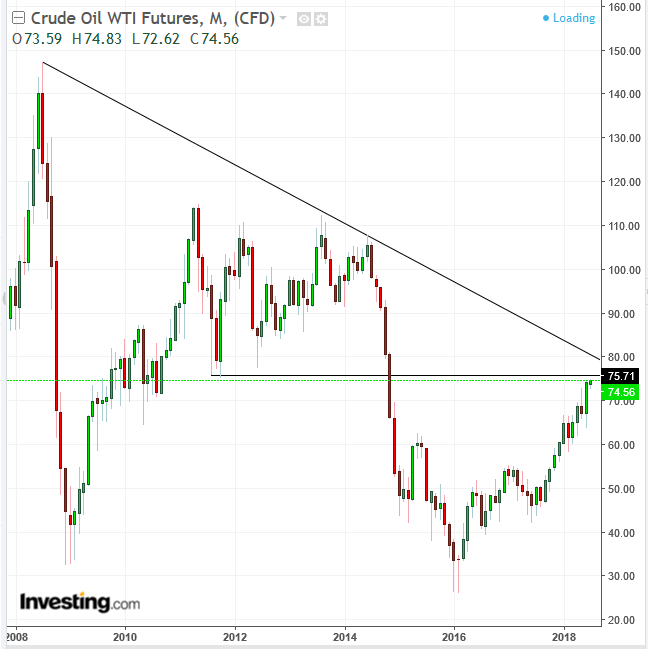 climbed for the fifth time in six sessions, hitting the key $75 level for the first time since November 2014, after the production increase signaled by Saudi Arabian officials failed to move the needle on global supply. Technically, the price is heading to a macro downtrend line since mid-2018, under the $80 level, as well as the resistance above the $75 level, prior support since 2011, till its violation at 2014.

The bounced back from losses of 0.65 percent, closing 0.31 percent higher. Gains of 0.89 percent in shares offset a plunge of 1.51 percent in stocks.

This dramatic US equity rebound may underpin investor resilience ahead of a thorny trade tariff deadline on Friday. US President Donald Trump is poised to press ahead with $34 billion-worth of levies against Chinese products, thereby prompting Beijing to retaliate in equal measure.

News reports on Monday, that Trump’s administration is also preparing to withdraw from the World Trade Organization, will further test markets. Do traders have the ability to brush off Trump’s isolationist moves as mere negotiating tactics?

While US majors remain in an uptrend since February’s sharp selloff, they are all developing worrisome consolidations that are forming pennants. These patterns indicate that sellers and buyers are competing fiercely, but the advantage is toward the preceding move, which has been down. This suggests momentum is on the side of the sellers. 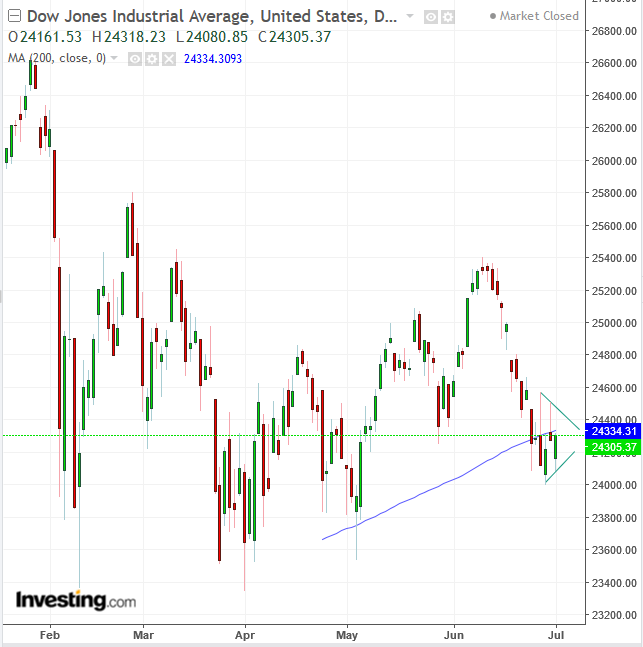 In particular, the Dow Jones sent out an especially alarming signal yesterday. Its rebound failed to overcome the 200 DMA. However, bearish pattern would only be complete after downside breakouts, so hope is not entirely lost.