US futures on the , , and as well as European shares extended the reflation-led rally on Wednesday, as positive earnings reports overshadowed concerns of a slowdown in future economic growth due to the persistent coronavirus pandemic.

Treasury yields climbed for the second day, pushing the dollar rally further along to a multi-month high and a possible significant bullish pattern completion.

All four US futures were in the green, with the reflation trade leading the rally for the second day. Contracts on the Russell 2000—whose listed domestic firms would benefit from easing social restrictions—were up 0.8%, followed by futures on the Dow’s blue chip, value stocks, which were up more than 0.5%. At the shallow end of the profit-pool, the tech heavy-NASDAQ 100—whose components excel when people are restricted from direct contact—was up only 0.1%.

In Europe, the Index extended the rebound to its second day, buoyed by travel and leisure related stocks, representing sectors that would benefit from a reopening economy. 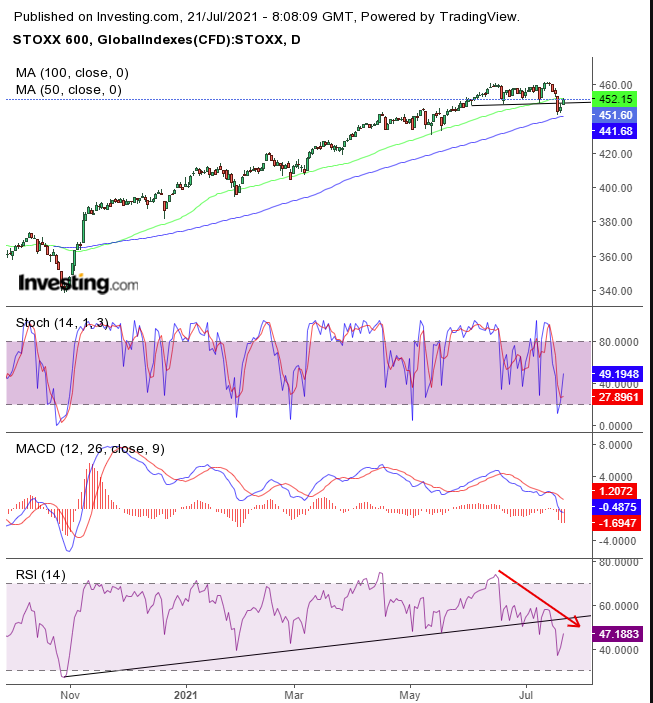 The pan-European benchmark jumped back above the neckline of a near-7 week long double top. However, while bouncing off the 100 DMA, it now finds resistance by the 50 DMA. While stochastics entered a bullish cross after reaching oversold conditions, the MACD and the RSI are still bearish. Bottom line, European stocks are showing a mixed picture. If the index will manage to take out the 460 levels, blowing out the pattern, it will force unwinding positions, which tends to boost freely traded securities further along.

Semiconductor company ASML Holdings (AS:) its sales outlook amid a sharp global shortage due to a bottleneck in supply after the pandemic disrupted markets and supply chains, boosting the Dutch company’s stock by as much as 4.5% to within 0.3% of its July 14 record.

On the other side of the chip-spectrum, German automaker Daimler AG (DE:) declined 0.8%, as the Baden-Wurttemberg-based firm due to the global shortage in semiconductors. 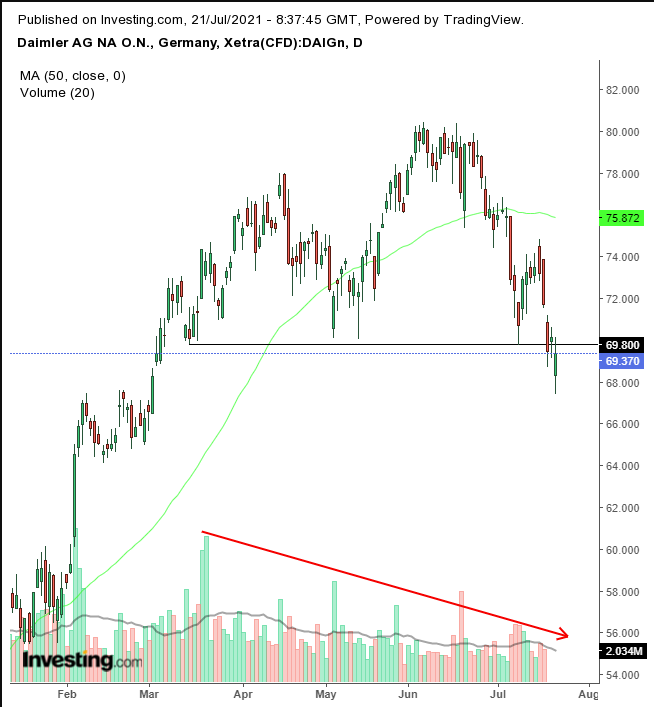 The stock completed a top, foretold by a volume negative divergence.

Swiss Novartis (SIX:), one of the world’s largest pharmaceutical companies, a net $2.90 billion profit, substantially higher than the $1.87 billion from the same time last year, beating expectations and is set to deliver 50 million CureVac COVID vaccines this year—propelling the stock higher. 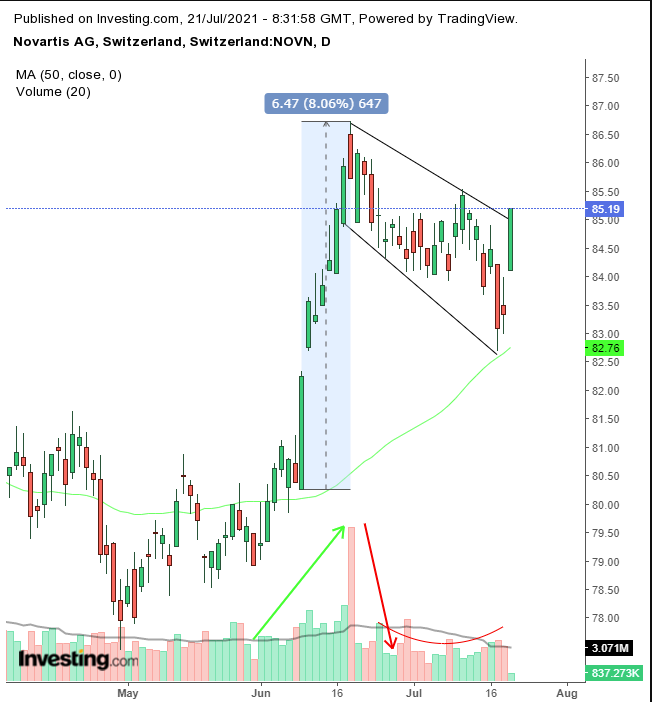 The Basel based drug maker’s stock tested the top of a possible falling flag. Textbook theory mandates that flags are up to three weeks, while this one is slightly longer than a month. However, the crowded trade in the slow dip amid drying volume following a spike in volume that accompanies a sharp rally are the telltale signs of a falling flag. The price surged 8% within 8 days during which trading went up in virtually a straight line, which may mean that this congestion may pack the punch of a continuation pattern, complete with an upside breakout.

The Asian session was less optimistic, as the region is more heavily beset by the Delta variant of COVID-19. At first, traders attempted to follow Wall Street’s rally, though they soon lost their nerves and sold off.

Australia’s rose 0.8%, outperforming peers in the region, boosted by healthcare and financial shares, despite the country’s two largest states suffering from an increase in virus cases. South Korea’s , on the other hand, declined 0.4%, extending a selloff for the fourth consecutive day, after virus cases jumped to 1,784 in the last day—a daily record.

US stocks rebounded upon dip buying yesterday, nearly erasing Monday’s slump, in the biggest jump since March, as investors, again, shrug off the concern that the ongoing health crisis will upend a strong economic recovery. As we pointed out yesterday, cyclical stocks led the rally—with the topping 3%—after having taken a hit during the preceding selloff.

Traders are now considering whether the recent drop is yet another buying opportunity as companies report strong earnings, as well as unprecedented fiscal and monetary policy, or whether it is the opening shot of a broader correction amid fears that economic growth will be curtailed by resurgence of COVID-19, as well as the highest inflation since 2008—just before the last market crash.

Yields on Treasuries climbed for the second day above 1.25%, which might demonstrate confidence, as investors are willing to part with Treasuries ahead of an of securities.

Treasury bears will have to prove themselves in order to reverse an uptrend for bonds—or a downtrend for yields—whose momentum is driven by the continuous two-pronged fear of the virus and inflation stopping the economic recovery. Despite recent comments from Fed Chair Jerome Powell who that current inflation levels are insufficient to remove the most generous accommodation in history. 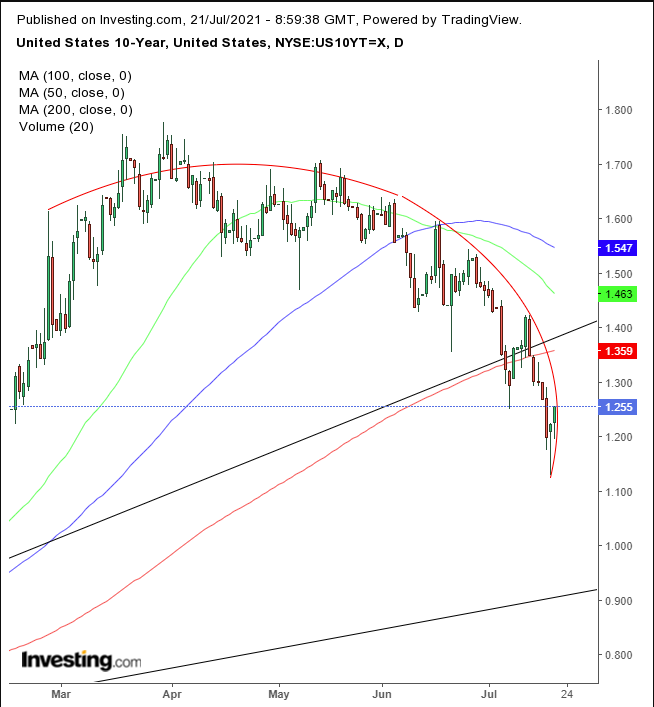 After breaking through the uptrend line—reinforced by the 200 DMA—since the August low, the next support is much lower, at around 1.00%, where the uptrend line from the record low of March is expected to meet the plummeting rates. Meanwhile, yields have support after yesterday’s potent hammer, with an extremely long lower shadow, as investors cash out of Treasuries.

The pared highs of its fifth consecutive daily gain. 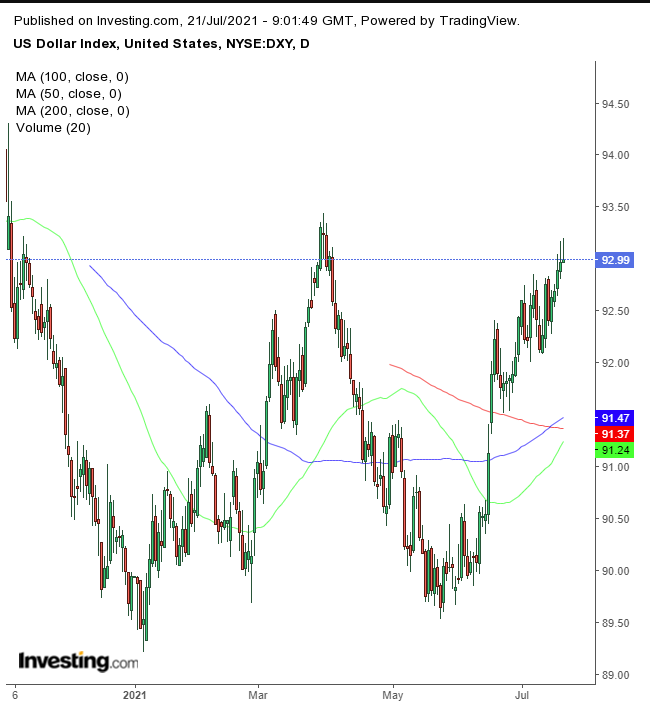 The greenback is forming an intraday shooting star, having neared the late-March high levels. If the dollar continues higher, it will have completed a large double bottom since the beginning of the year.

is down on dollar strength. 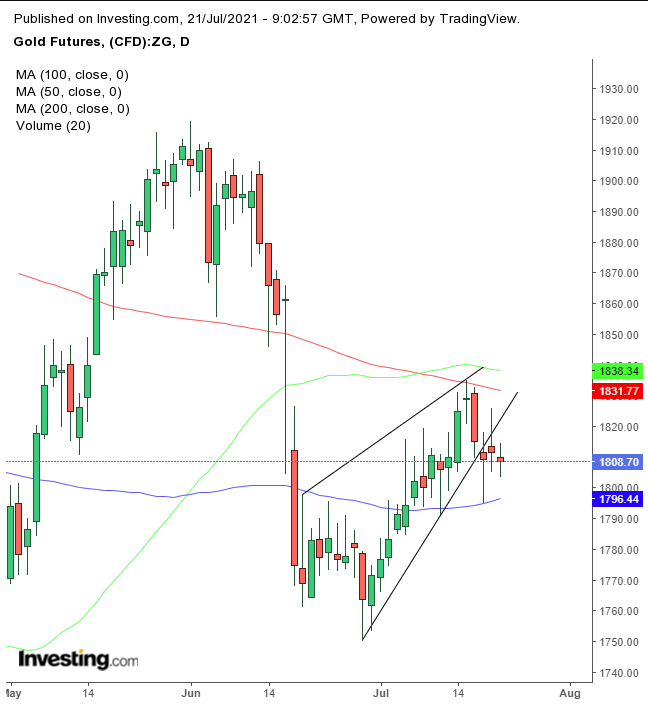 The yellow metal fell for the second day, after retesting a bullish flag. 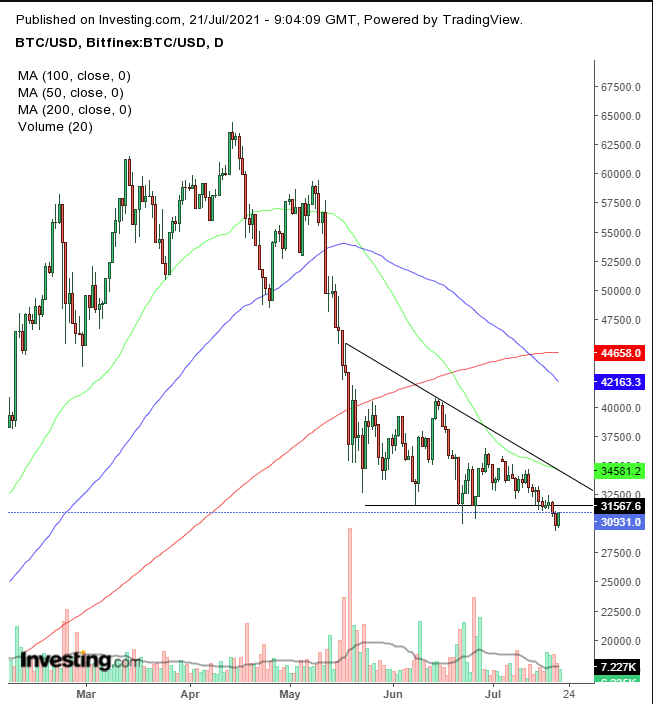 But the digital coin may have completed a descending triangle, rendering the current rally as a return-move, before another leg down.

is struggling to maintain a rebound after a surprise build up, exacerbating a selloff due to higher output agreed by OPEC+, though Goldman Sachs considers it a bump in the road and is maintaining its bullish view. 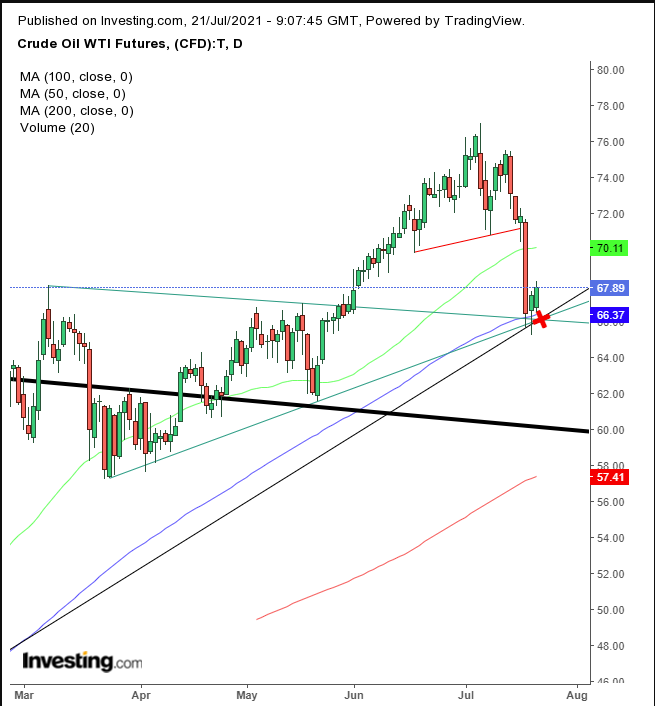 Technically, we can see why oil will climb higher. The recent drop actualized the implied target of a small H&S top, whose decline stopped precisely at the confluence of supports of the preceding bullish triangle (green), the uptrend line (black) and the 100 DMA. The thick black trendline represents the long-term downtrend line since 2008, which bulls have managed to push through. Note, how the 200 DMA rushes to support it.