Futures on the , , and are rebounding on Wednesday following yesterday’s Wall Street session selloff. Investors have refocused on the economic recovery, ignoring inflationary concerns which were heightened by comments from US Treasury Secretary, Janet Yellen early Tuesday.

As the rally in commodities continues, so too does the recovery in the price of oil.

The rapid shift in investor sentiment from worries that an interest rate hike was likely in the cards to expectations of a sustained economic recovery are difficult to take seriously, as we have been witnessing this flip-flop for some time now, sometimes occurring even within a 24 hour period.

How many times will the market change its mind? The argument swings from the belief that rising inflation will chip away at economic growth to the opposing view, that insatiable demand for products and services will absorb rising prices and support economic growth.

For once, perhaps the confusion is legitimate. Yellen, who also happens to be a former Federal Reserve Chair, surprised the market on Tuesday when she said that the Fed may use higher interest rates to deal with rising inflation, should it materialize. The comments manifested in a sharp selloff.

Yellen later backtracked, saying that she was neither recommending nor predicting rate hikes, and this seemed to seep into the market’s collective consciousness.

All we can do is continue to monitor the forces of supply and demand and attempt to maintain our bearings in an ever-changing landscape.

Ahead of today’s US session open, all four contracts on US major indices were at least a quarter-percent in the green at the time of writing, with futures for mega tech and small caps leading.

In Europe, miners and travel shares—obvious beneficiaries of the reflation trade—pulled the to a higher open, +0.8%, but the pan-European index fell into the red soon afterward.

Shares of Hugo Boss (DE:) surged 3.9% after the luxury clothing retailer sales that beat expectations. Even though sales have actually dropped dramatically since the outbreak of the coronavirus, the firm argued that its profits have been in an upward trajectory. 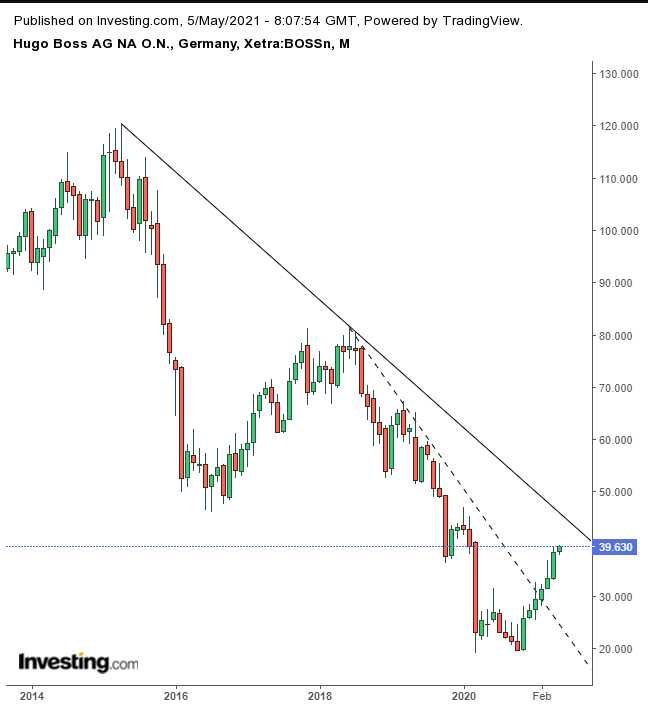 Volatility picked up a notch, with the mega cap tech companies—which have milked the most out of valuations as the world has had to rely more on technology during the worst global pandemic in 100 years—declined. We can see yesterday’s wild ride on the , the so-called “fear gauge.” 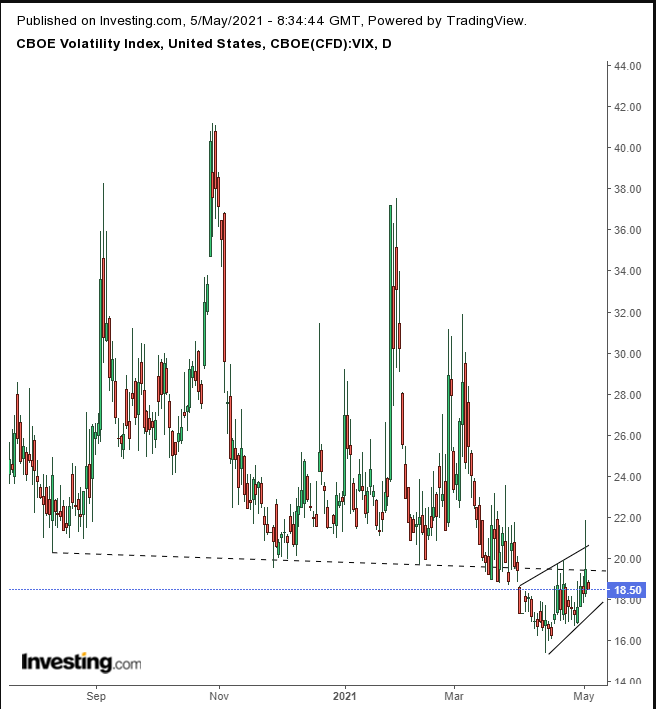 As traders bet on increased volatility, the VIX shot towards 22.00 for the first time since March. However, Yellen’s second message seemed calm the markets, pushing the gauge back below its resistance since August. However, the VIX has been tightly ranging with an upward bias in the shape of a rising flag. Should this trading follow the same dynamics of any other freely traded security, a downside breakout may suggest a further decline.

Yields on the Treasury note rebounded today after whipsawing wildly on Tuesday, and closing lower. The climbed for the second day, past 91.40, for the first time since mid-April. 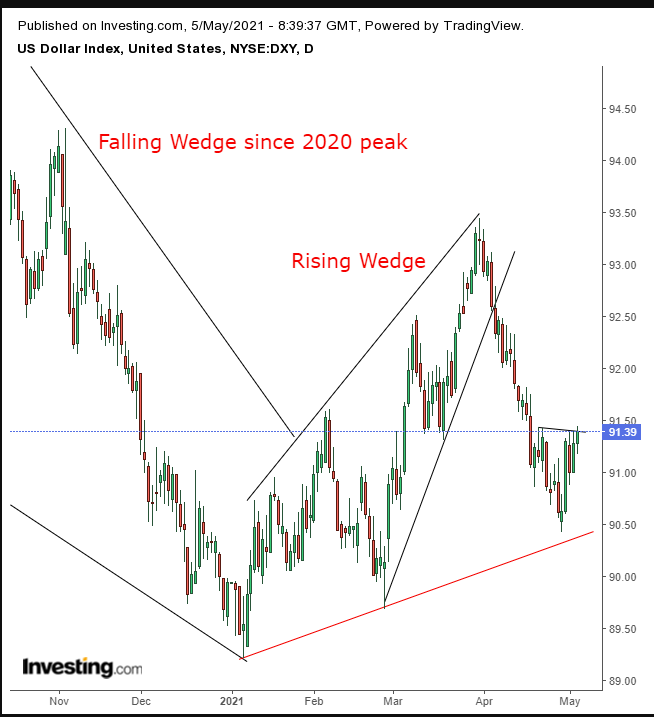 A further rise would complete a small H&S bottom, confirming the short-term (red) uptrend line since Jan. 6. This may signal the end of the decline that followed the rising wedge, as the potential follow-through of a bottom following the falling wedge since the 2020 peak.

edged lower for the second day.

traded higher, but we still expect it to fall. 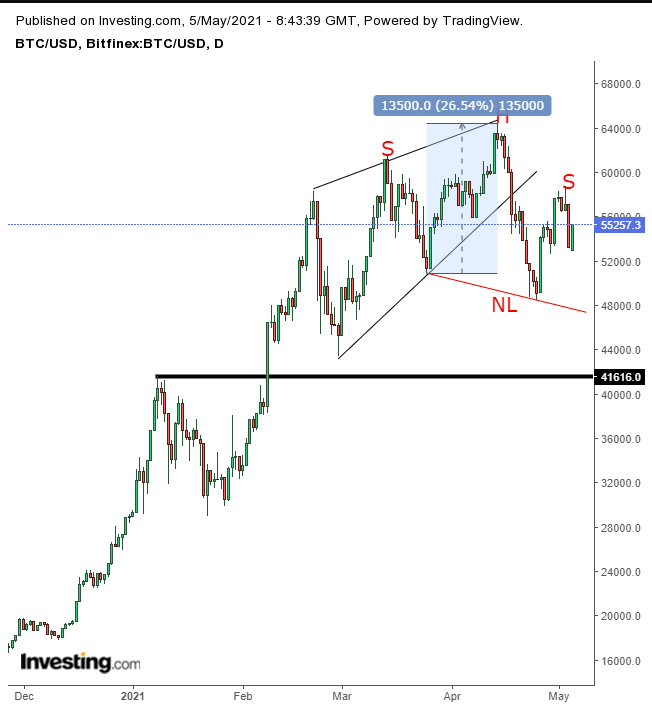 If the falling wedge retains its resistance, the digital currency will have completed a H&S top, whose downside target is considerably below the wedge’s fall toward the low $40,000s; rather, it would be aiming toward the low $30,000s.

The reflation trade pushed commodities to decade highs. topped $66 a barrel for the first time since March of this year. 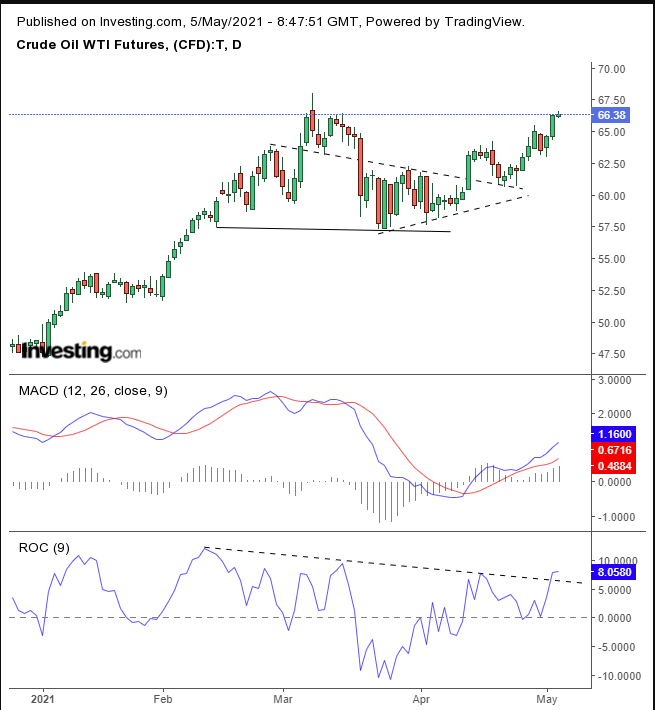 After blowing out a potential H&S top and a bearish pennant, WTI is now testing the Mar. 8 intraday highs, leaving a potential for a double top.

Indicators show that there’s plenty of room for a further climb and are providing bullish signals.