Stocks in Europe opened higher, boosting futures on the , , and . Asian benchmarks were mixed, after China’s clampdown on “speculators and hoarders” of industrial commodities dented mining-related companies.

All four US contracts were about 0.5% in the green, at time of writing, with stocks on the tech-heavy NASDAQ 100—representing one side of the reflation trade—and Russell 2000 futures—representing value stocks and the opposite side of the reflation trade—moving in unison. Both indexes were slightly outperforming the S&P 500 and Dow Jones, which were ranging around 0.40%. The current picture suggests that after reflecting on the markets’ whipsaws last week, traders are ready to get back into equities.

The Index was little changed on Friday, as technicals kept it under pressure. 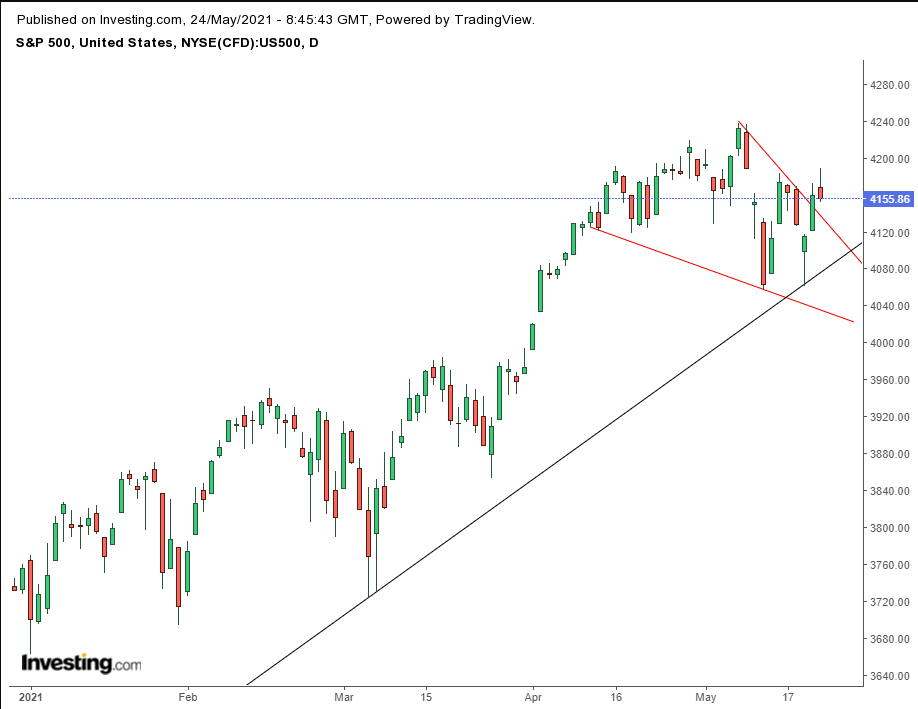 The broad benchmark completed a bullish wedge, but Friday’s bearish shooting-star demonstrates that it ain’t over till the fat bear sings.

The Index was pulled in two different directions. Banks and technology stocks—normally possessing a negative correlation within the reflation trade—outperformed, while mining firms lagged, after China’s warning. plunged over 5%, and tumbled nearly 10%, almost triggering its daily limit.

Asian gauges were uneven, the MSCI’s broadest of Asia-Pacific outside Japan edged 0.1% lower amid thin trading. China’s (+0.3%) was the best performing index in the region while South Korea’s (-0.4%) underperformed.

Last week stocks were volatile, which led to a debate on whether the recent bloodbath seen in cryptos might be the cause. We maintain it is.

rebounded after a deeper fall on Saturday that took it below its uptrend line since the October low. We, however, are more concerned about horizontal, constant supports, such as the January lows. A break below $29,000 will likely see an extended drop. We, however, are holding  out for a return to an advance after the cryptocurrency more than halved in value, fulfilling our target fully.

Yields on the Treasury note—which have started the inflation panic—have been ranging since March in a symmetrical triangle. 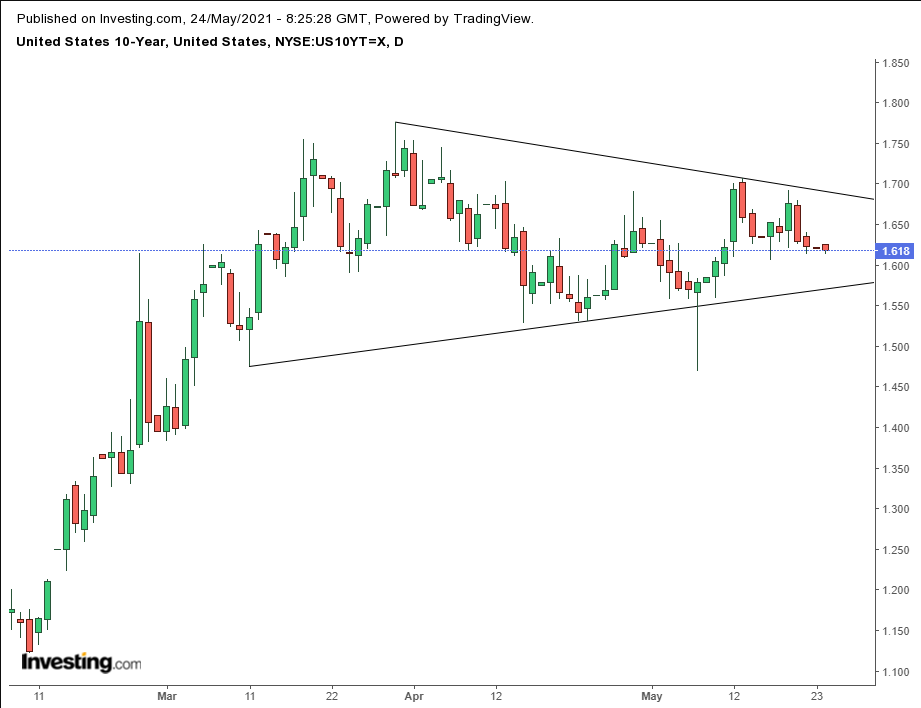 While there tend to be pauses within the underlying trend, which is up, the direction of the breakout will determine the digital token’s continued path.

The fell, within what seems to be a bearish pennant, whose downside breakout will challenge our recent bull call. 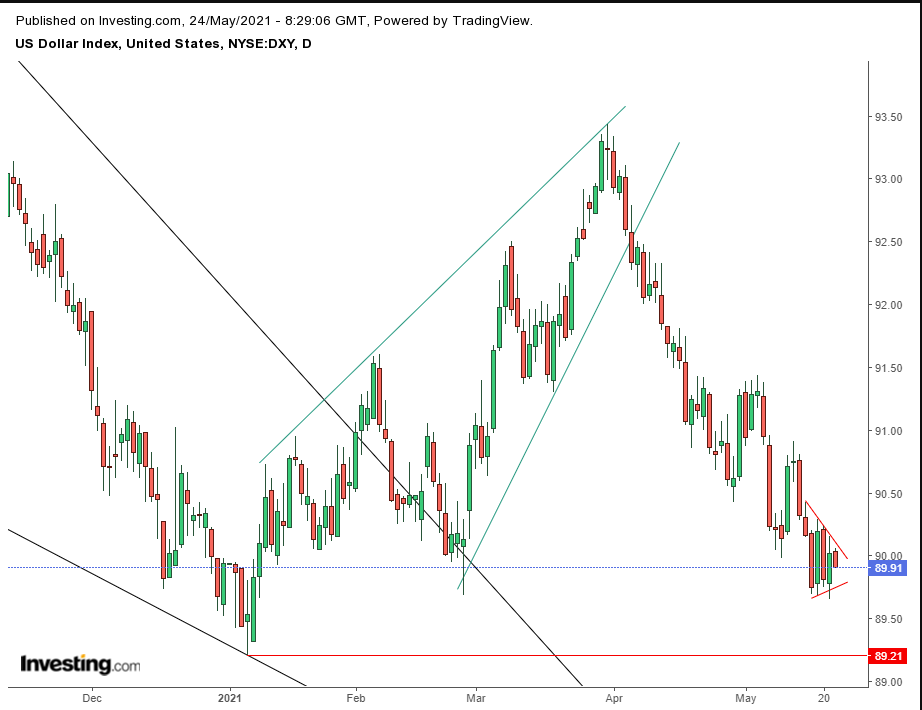 A fall below the Jan. 6 low of 89.21 will turn us back bearish again, after the massive wedge since the 2020 peak turned us bullish, which worked out till breakout turned into a smaller, bearish wedge.

was flat after giving up daily highs for the fourth day, as it struggles to break free of its current rate of ascent in the form of a rising channel. 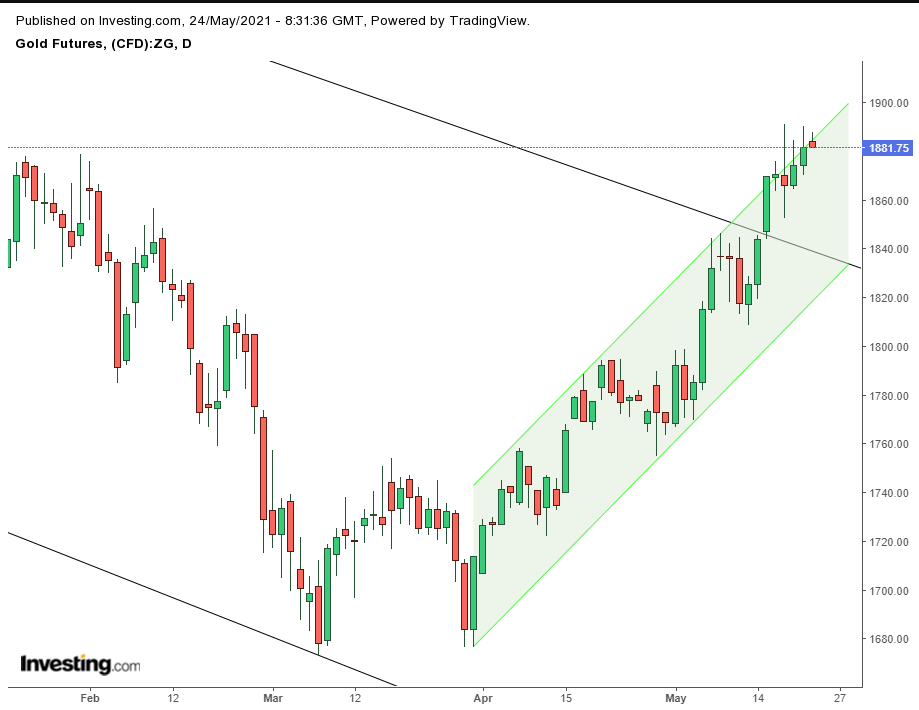 We expect the precious metal to retest the channel’s bottom, as well as the top of the recently broken falling channel since the 2020 record peak.

traded around $64 a barrel amid further signs the US is recovering from the pandemic which will boost demand. Traders also monitored progress in US/Iran talks on reviving an Iranian nuclear deal that could lead to increased global crude supply.