Contracts on the , , and declined in trading on Thursday, and European stocks fluctuated as the market attempted to price in the odds of monetary policy tightening by the Federal Reserve and the effect it could have on the economic recovery after pandemic-related lockdowns.

Oil retreated on the possibility of Iranian supply returning to markets.

Vice Chairman for Supervision of the Federal Reserve said yesterday that the Fed needs to start considering reducing its massive QE program, if the US economy is to continue expanding.

All US benchmarks slipped after the notion of tightening was suggested, resuming the seesaw of worries about inflation, interest rates and the economic recovery.

In Europe this morning, gains in miners and travel stocks were battling against a drop in healthcare-related stocks, causing the pan-European to whipsaw. 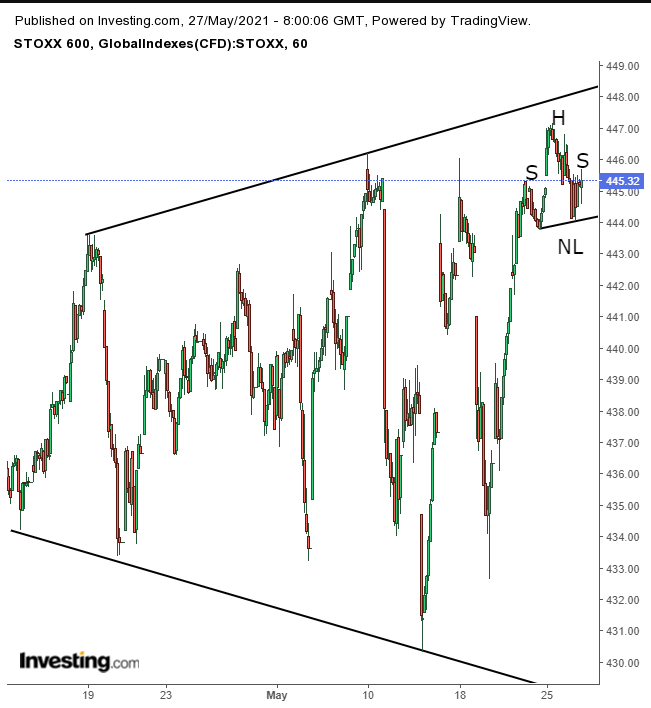 If the price dips below 444.00, it will have completed an hourly H&S top, which could push prices back toward the bottom of a broadening top at the low 400’s. If that breaks, we could see a deeper correction.

The world’s largest airliner manufacturer, Airbus Group (PA:) opened more than 3% higher after announcing to suppliers that it will raise output over the next 2 years. The stock climbed as much as 6.5% and settled at a 5.8% advance, as of the time of writing. 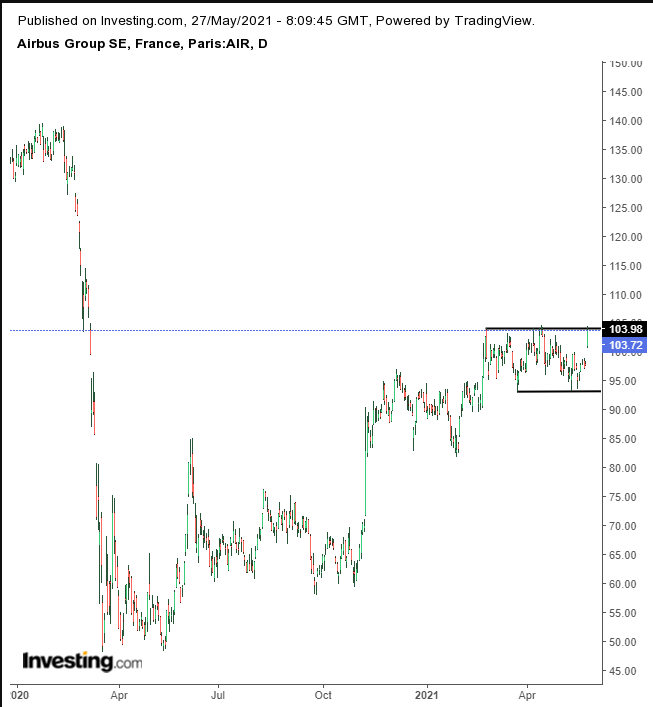 The price found resistance by the February and April highs. Since the Apr. 16 close it has been trading flat, but today it reached the highest level since Mar. 4, 2020.

Earlier, Asian benchmarks were uneven, ahead of US economic data releases today which will provide details on , and and offer further clues about the Fed’s policy path.

China’s and the both climbed for the fourth day, after the Asian nation held its first trade talks with the US since President Joseph Biden took office.

Value stocks led a rally on Wall Street yesterday.  and outperformed in the , while  remained flat. The —host to domestic firms likely to benefit the most from an economic recovery—outperformed, gaining 2%. The 125-year-old fluctuated. —one of the sectors to gain the most with higher interest rates—rose after the chief executive officers from the largest lenders testified before Congress.

Global stocks surged along with a rapid Treasury selloff, pushing yields on the Treasury note to pre-pandemic levels. However, Quarels’ assertion that “we need to remain patient” before any policy shifts occur helped push yields back down. 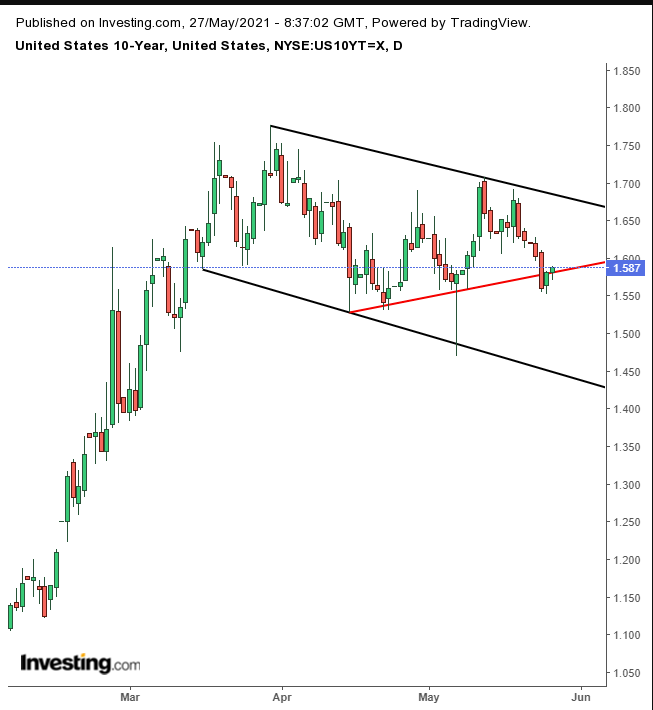 Rates are struggling against the April-May lows, as they try to return to the top of a falling channel.

The pared yesterday’s rebound. It is being squeezed between conflicting forces. 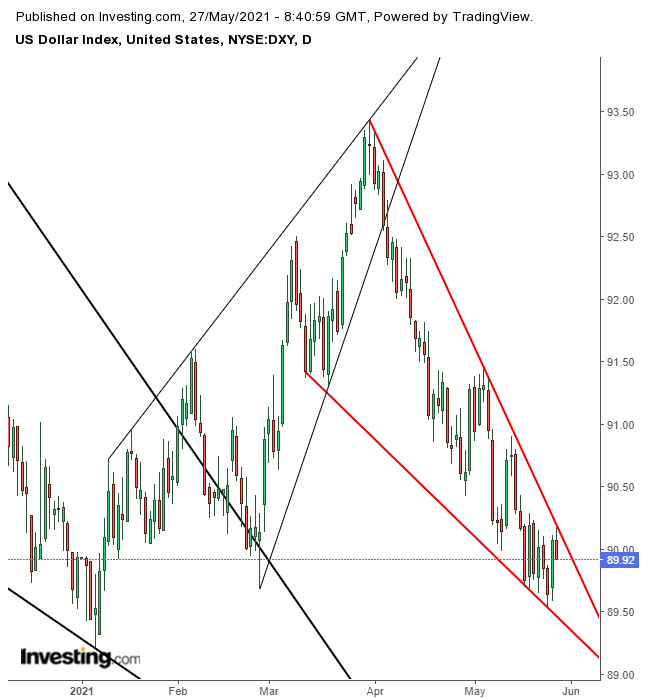 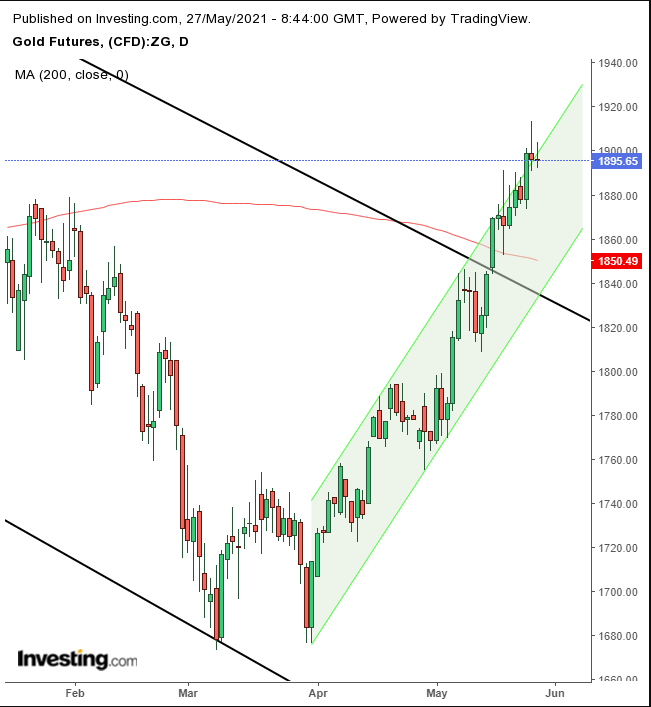 It continued to congest, as it struggles to free itself from its current, narrow rising channel. Notice how spiked the current advance is, compared to the more tempered, much broader falling channel since the 2020 record peak. A downward correction is due.

We have reversed our previous bearish call on , which reached our target, more than halving in value. 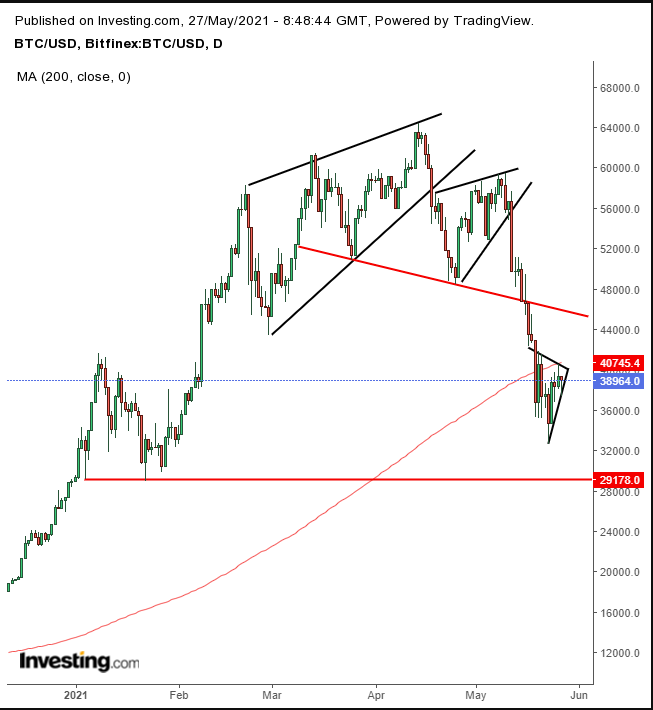 However, a bearish pennant is going to test that call. If the price closes below $29,000, we will once again reverse our position.

fell away from the top of an ascending triangle. 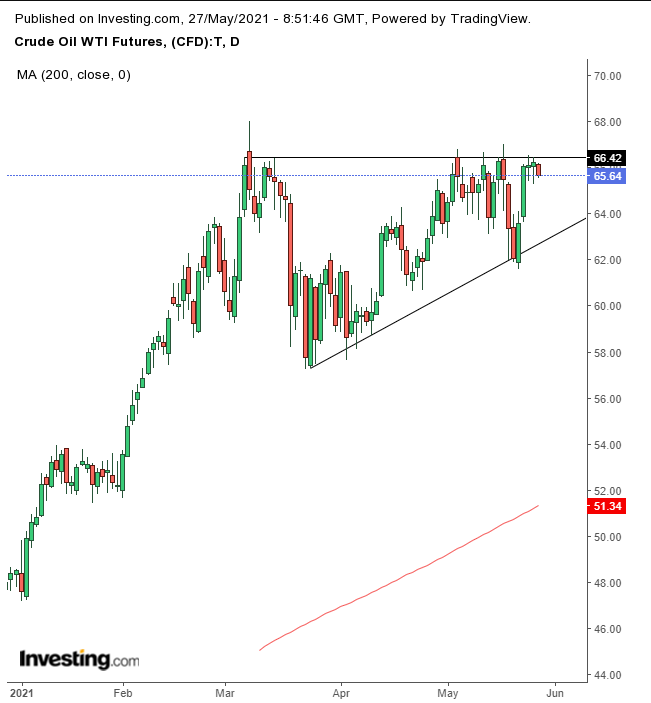 The prospect of an agreement between the US and Iran on a nuclear deal which will result in sanctions being lifted and a return of Iranian oil to the market, causing a glut. For traders, this has overshadowed the view that summer driving and a restarting economy will absorb the oversupply. The OPEC+ monthly meeting begins on Monday; some of these issues will likely be critical agenda items.