Futures on the were the only US contracts in the green ahead of the US session on Tuesday as traders expect the technology sector to continue its rebound. Futures on the , and were all forecasting a lower open each of the three underlying indices posted record highs on Monday on US stimulus spending optimism.

The dollar, which had rallied for three days, is slightly lower this morning.

The was the only benchmark that failed to post a new record yesterday, closing 6% below its Feb.16 all-time high. It appears that the US reflation trade is taking a breather, and maybe investors have decided to take profits on the news that the vaccine rollout in Europe has hit a snag.

European countries, including Sweden, Germany France and Italy have halted AstraZeneca (LON:) inoculations on reports of blood clots in some recipients. They are awaiting a decision on Thursday from the European Medicines Agency, which is currently reviewing the new vaccine data, as to whether they can restart the vaccination process. The move is exacerbating the already slow pace of the rollout across Europe.

What is noteworthy is that the travel and leisure —one of the hardest hit market segments during coronavirus lockdowns—was in the green, despite the vaccine turmoil in Europe. It appears that the overall optimism has spilled over into this sector as investors are so behind the reflation trade they are willing to turn a blind eye to what appears to be a real impediment to economic recovery.

Earlier, Asian indices were in the green across the board, having caught the headwinds from yesterday’s US markets.

Shares listed on the four main US benchmarks, the , , NASDAQ and , gained, posting solid green candles, although the Russell 2000 closed at the very highest point of the session. Still, there is cause for caution. 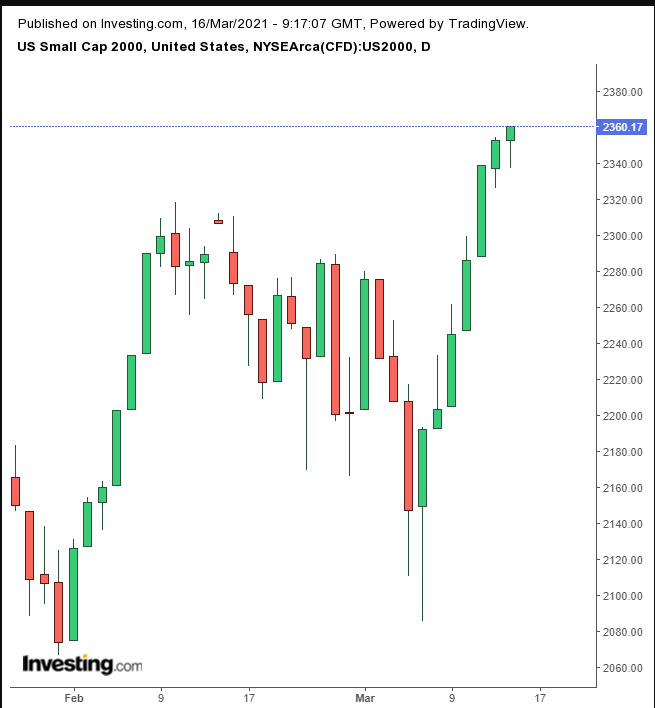 The Russell is the only gauge that developed a hanging man, and if futures on the small cap index—amid what could turn into a vaccine crisis in Europe—are any indication, we could see a close below Monday’s opening price, confirming the pattern’s bearish signal.

It just so happened that yields on the Treasury note—which we have repeatedly demonstrated are correlated with small caps as a manifestation of reopening economies after coronavirus lockdowns—fell for the second day. 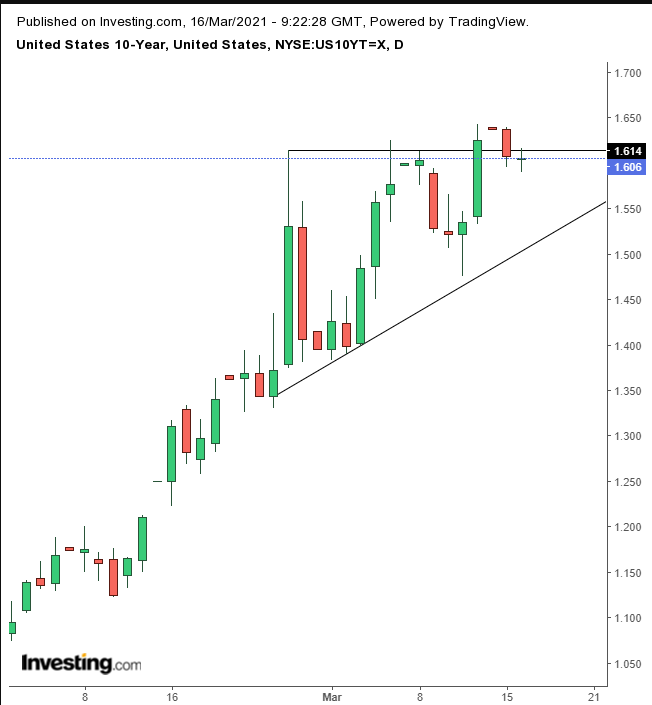 Rates are struggling to remain above an ascending channel. If successful, it would indicate a continued rise.

The was higher for the third day, climbing back above the neckline of a double top, which followed a falling wedge since the March top. 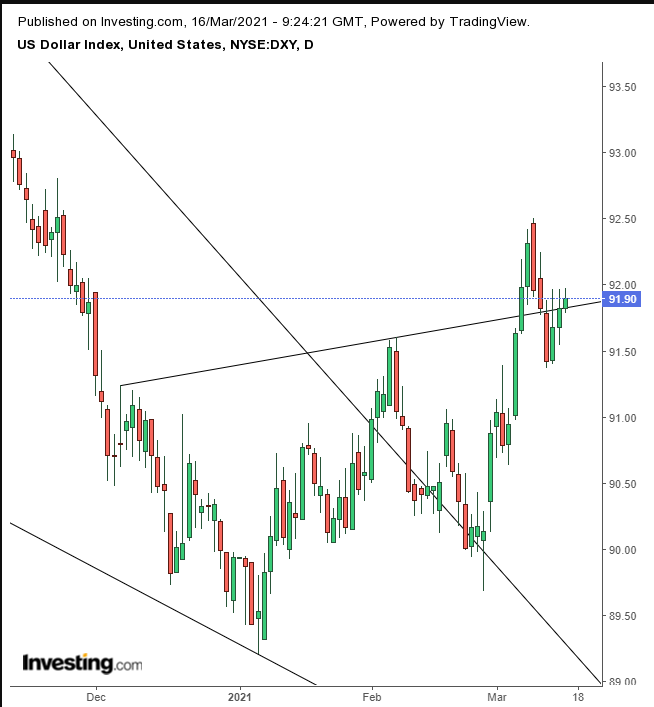 Note, however, that the price has been stuck at precisely the same level, 91.96, for the third day.

Bottoming MACD and ROC suggest a rebound from the bottom to the top of its channel. 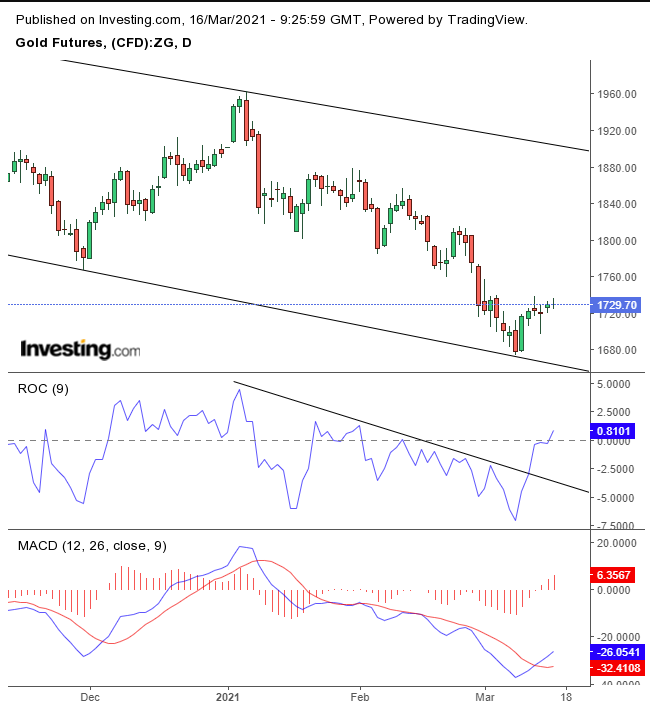 However, because the yellow metal’s price is falling, it could always turn around and keep falling. 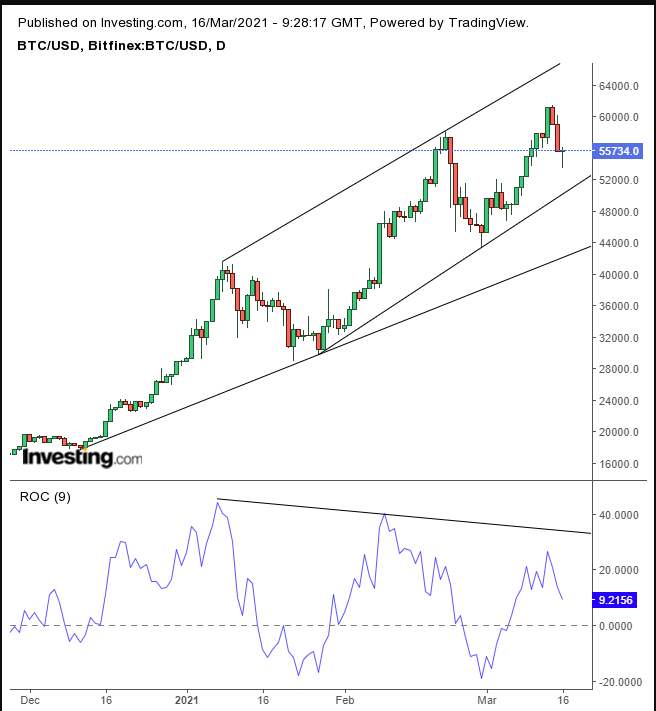 However, there is still room for a take-profit correction, within its rising channel.

Oil retreated for the third day as the “Iranian oil surge to China hurts OPEC efforts to tighten supply.” 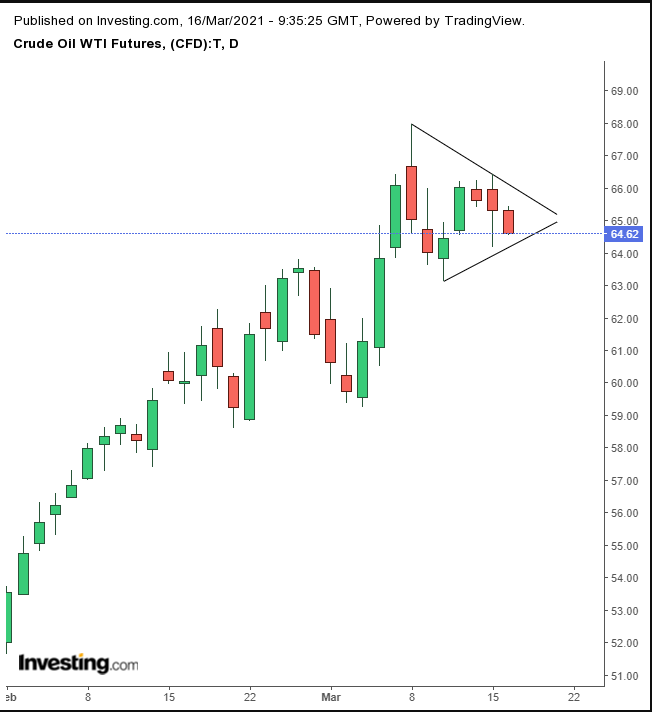