US futures for the , , and were all off session highs on Monday, while European shares opened lower. Asian indices had a mixed showing this morning as traders try to figure out if exhaustion had set in after last week’s most exuberant rally in years.

Yields climbed, pulling the dollar up. At the same time, gold found its footing.

Contracts on major US indices trimmed an earlier advance but remained slightly higher. Futures on the NASDAQ 100 are signaling that the could see a record close during today’s Wall Street session, following Friday’s all-time high. This comes on the heels of improving economic data, including last week’s release which surprised significantly to the upside. It helped bolster the case for a quick economic recovery ahead of this week’s Fed decision.

Markets are now focused on the Fed’s meeting this week as well as the Wednesday and , including the US central bank’s first official economic projections this year. Investors will want to get feedback on Friday’s astounding data turnaround, which went from an expectation of an additional 9 million jobs lost to the shocking addition of 2.5 million jobs.

Will the Fed hint at a potential rate increase this year? That would put traders in the uncomfortable position of deciding whether to root for confirmation of the vaunted V-shaped recovery, hopes for which have spurred them to push stocks so hard and so high. Or, would it be preferable to wish for lower rates instead?

The challenge for the Fed: finding that ellusive balance between pitching the economy or its stimulus; wealth creation vs a Fed creation as it were.

“Markets have responded positively to falling infection rates in the major economies, and signs of increased consumption as countries emerge from lockdown,” Gavekal Research analysts wrote in a weekend note.

“But by buying at present valuations, investors appear to be pricing in a perfect Keynesian recovery in the second half of the year.”

This morning, technology and healthcare shares dragged the into . 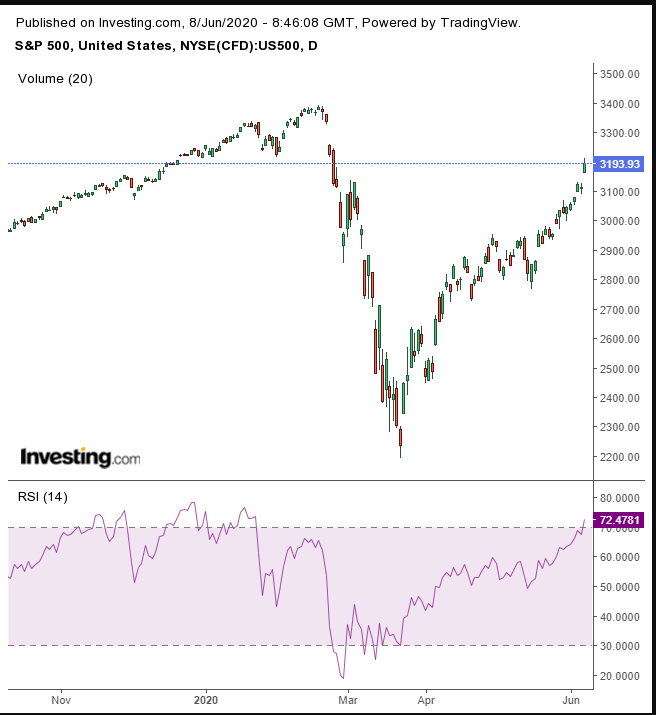 Will it prove the start of a new move toward the Feb. 19 record, which is 6% away, or will a downside gap complete an Island Reversal instead, as an overbought RSI might suggest?

Yields, including for the Treasury note, climbed for the sixth day, extending a selloff after Friday’s BLS numbers. 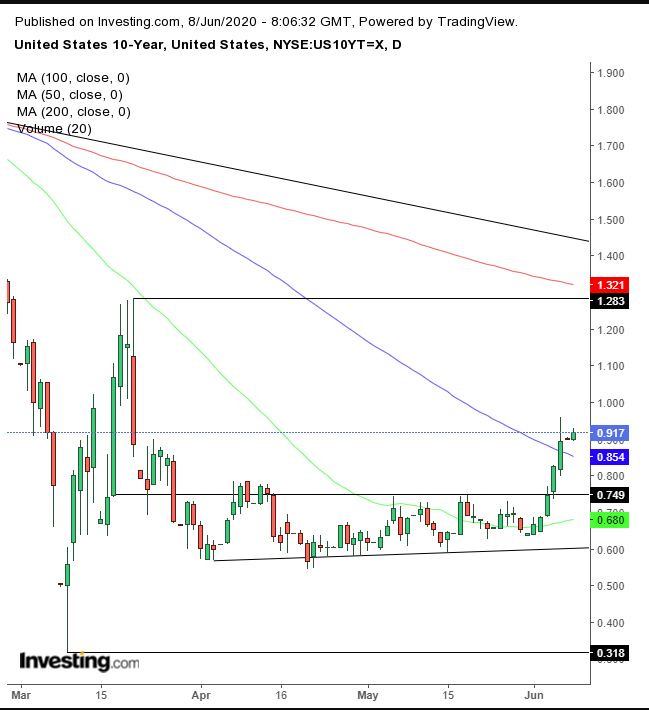 From a technical perspective, rates escaped a range via its topside. However, the sustained technical significance of the breakout remains unclear even though it included support off the 50 DMA and penetration of the 100 DMA, when the prior move was both lower—to the 0.31 March low, and higher—to the March 20 high of 1.28. Note: the 200 DMA looms right above that high, backed up by the long-term downtrend since the November 2018 high.

The slipped after two days of gains following a six-day selloff. 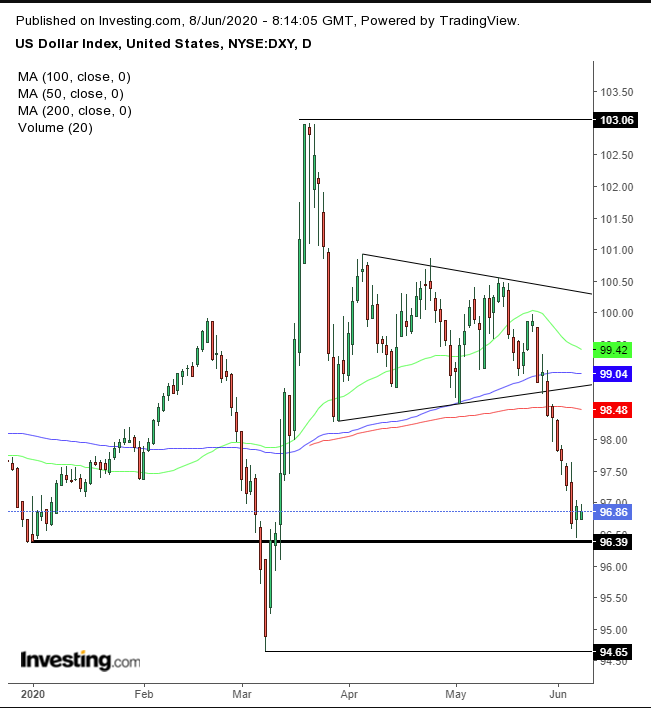 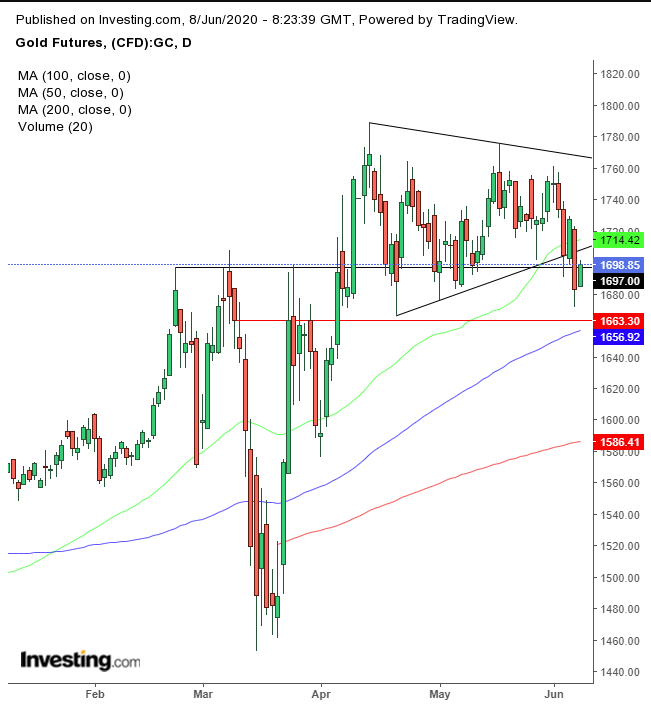 The MACD and the RSI reinforce the price patterns’ failure, but the ROC still gives it hope. We would consider $1,660 as our red line, the level where prices found resistance in March, but then later flipped to support with the development of the symmetrical triangle whose integrity is now in question, after prices fell below it on Friday.

jumped at the open, moving above $40 as OPEC+ , with Iraq and Nigeria promising to make up for missing their targets. 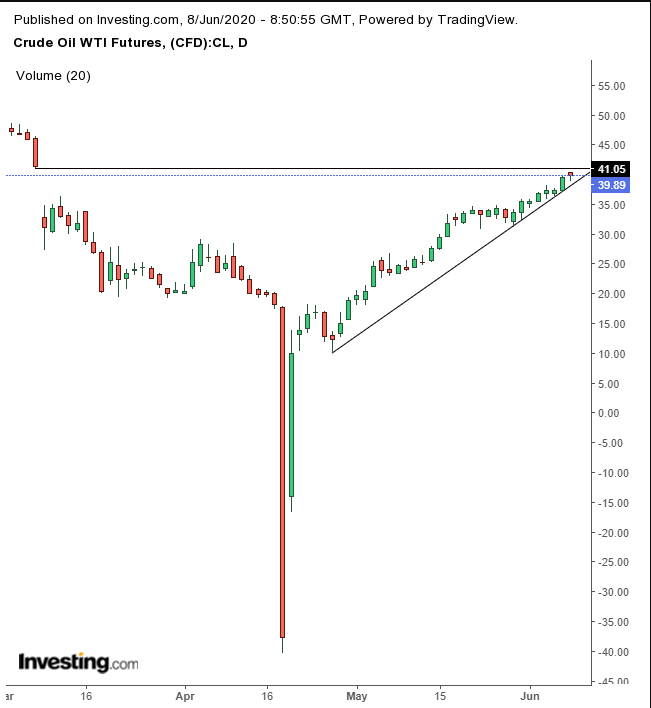 Technically, oil is struggling from below the $40 mark, and if prices close at these levels, it will demonstrate the round number as a psychological resistance. Should this occur, trading will have formed a hanging man, bearish upon confirmation of a lower close—all below the resistance of the March 9 falling gap.