Futures on the , , and as well as US Treasuries declined in pre-US open trading on Monday on continued inflation concerns. Saturday’s announcement from the G7 meeting in London, that it will set a global minimum corporate tax rate that will likely dent technology firms’ profits, was also weighing on markets. Comments from Treasury Secretary, Janet Yellen, that higher US interest rates may not be a bad thing for the economy provided support to the greenback, but the stronger dollar weighed on commodities, including copper and gold.

All four major US contracts opened at least 0.2% in the red, but the Russell 2000 was almost 0.6% down compared to the NASDAQ 100’s 0.3% loss, suggesting a possible rollback to the reflation trade.

Shares in Europe, including on the were pulled back from all-time highs by sliding commodity prices, after disappointing Chinese trade compounded inflation concerns. Miners declined by over 1%, after fell more than 0.5% over concern that a slower rate of Chinese recovery—the world’s biggest commodities importer—will lower demand. 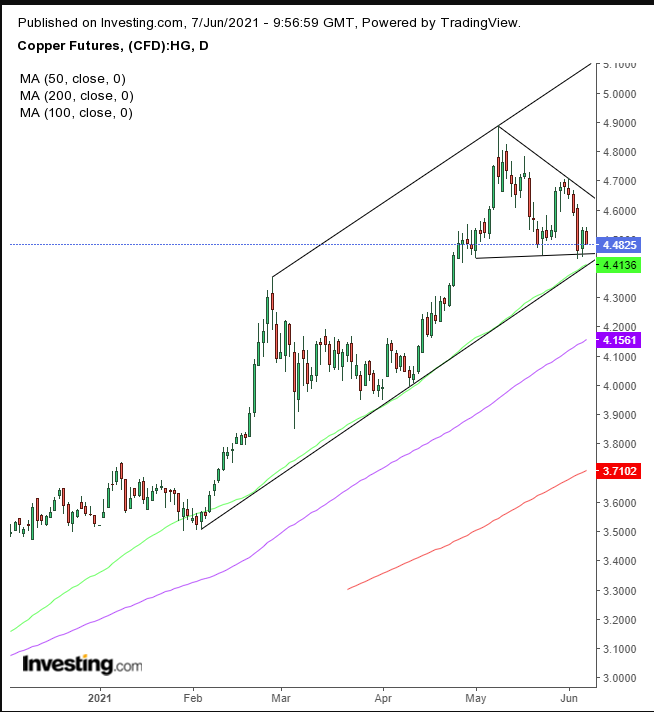 Copper is developing a descending triangle.

Stocks in Asia painted a mixed picture, as the increase in coronavirus cases, persistent in that part of the globe, offset last week’s strong performance on Wall Street. Asian economies are behind the US and Europe in the reopening process, but the vaccine distribution effort there is increasing pace. South Korea’s outperformed with a 0.4% gain, followed by Japan’s ’s 0.25% advance. Hong Kong’s lagged, falling more than 0.3%.

On Sunday, Janet Yellen, former Federal Reserve Chair, said that an interest rate hike would not be a bad thing, if it came as a result of President Joseph Biden’s $4 trillion spending plan, pushing yields on the Treasury note higher. 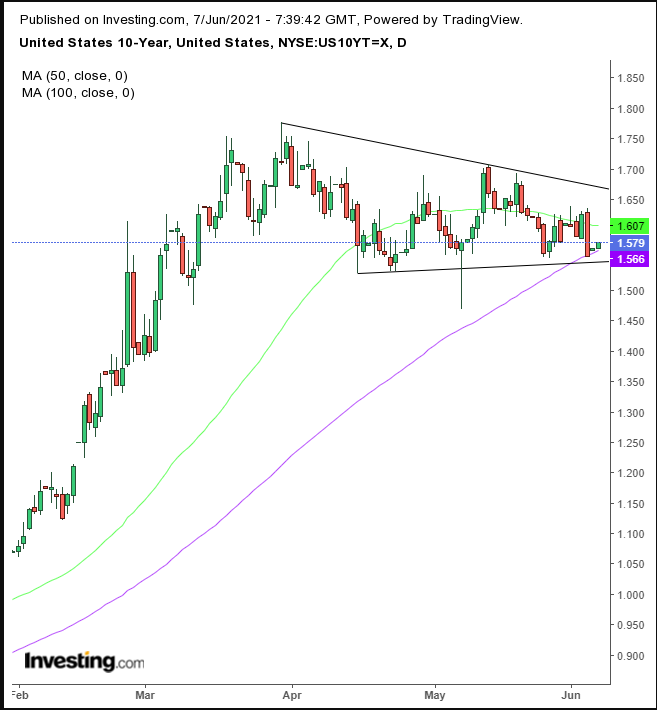 The rate found support by the bottom of a descending triangle that was helped by the 100 DMA. Yellen’s comments increased the outlook for higher rates, slightly supporting the . 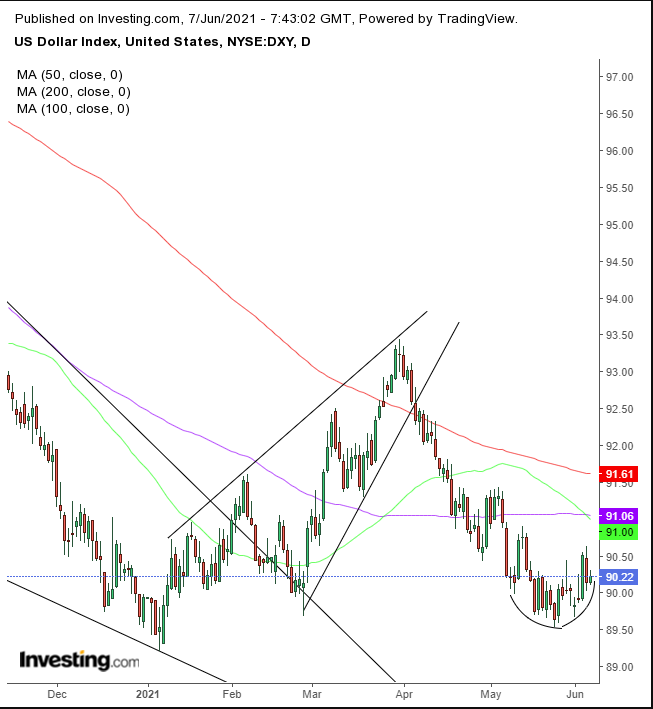 The greenback may be forming a small rounding bottom, which may be the prelude for a return to rallies, after the recent rising wedge achieved its implied target, returning to the massive falling wedge, since the March 2020 peak, bullish implications.

The outlook for higher rates, which is positive for the dollar, renders ’s value relatively lower, pushing the yellow metal into a dip. 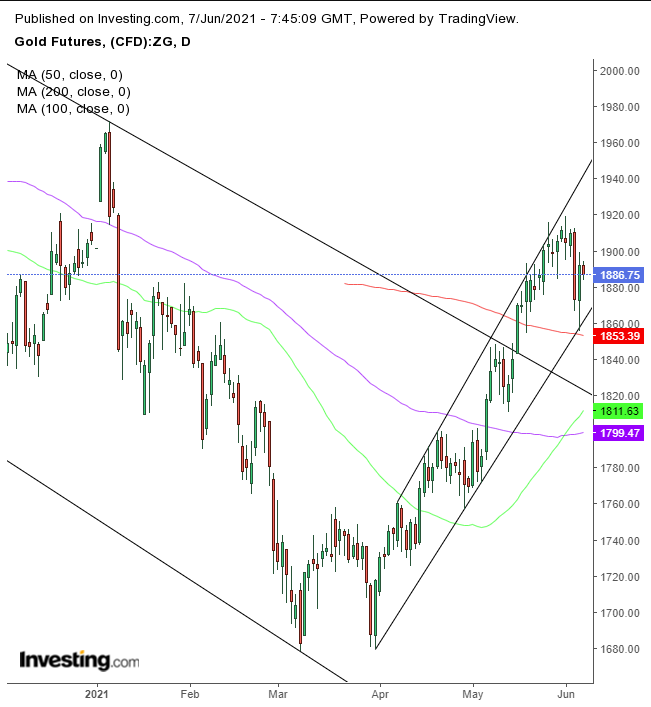 At long last, gold fell to the bottom of its rising channel. It found support by the 200 DMA and may not continue with its breakout from the falling channel since the 2020 record high.

slightly rose for the second day. 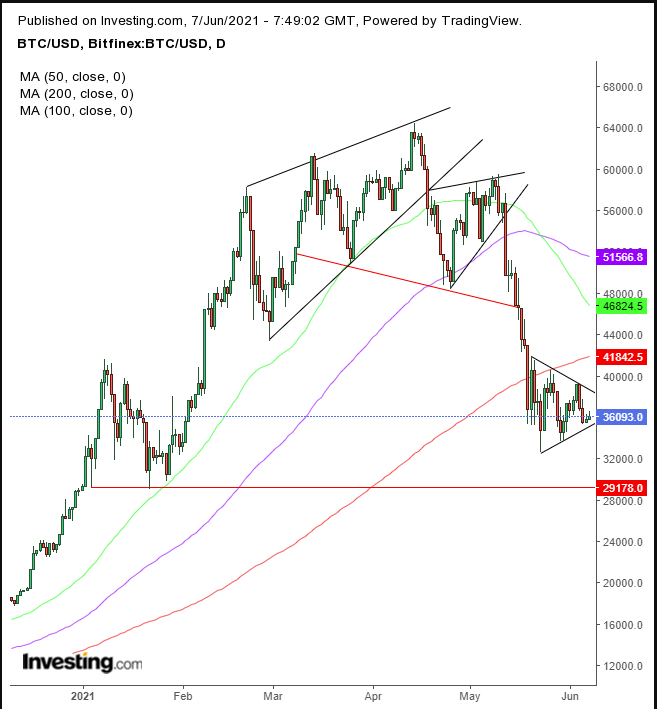 The direction of the breakout will likely determine its next move, whether it be a bearish pennant or a bullish, small, H&S bottom.

fell back from $70 on concerns of short-term demands as Iran could be nearing a deal to export its oil. 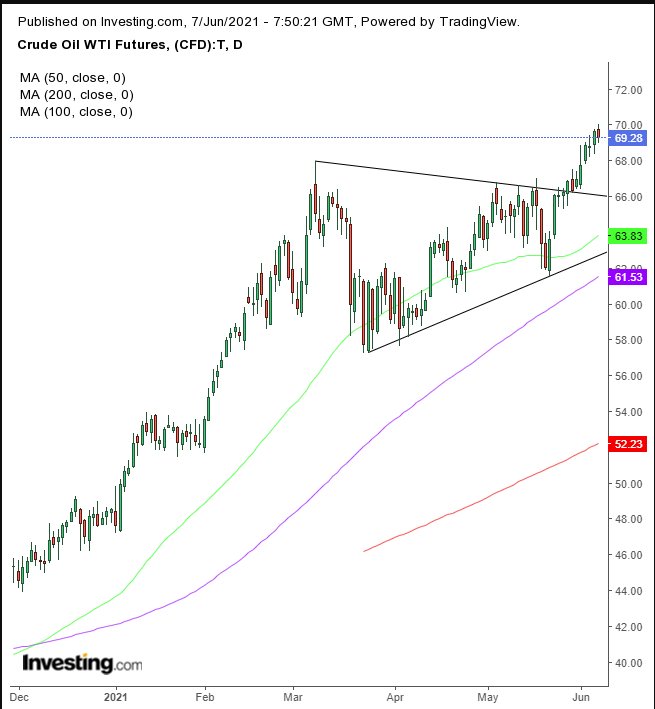 Oil recently completed a bullish triangle, which convinces us that a decline now would be a buying dip.