Futures on the , and took a steep turn lower after an upbeat opening this morning, as warnings from China of a potential military response to mounting civil protests in Hong Kong hit investor sentiment.

Before the downward reversal, at the European open, contracts on the SPX were trading at the height of the session, retesting Friday’s highs, while the was extending an advance, bouncing off the June lows guarded by the 200 DMA and climbing back above the 200 WMA, after a two-week selloff that almost completed a double top.

In the earlier Asian session, Japan and other markets were closed for a holiday. China’s jumped 1.45%, with consumer and financial shares taking the lead after the country eased lending rules to offset trade war headwinds. The move drove the region into a rebound, as U.S.-China acrimonious trade headlines took a breather, allowing opportunists to take advantage of valuations that have dropped sharply in the past month: average forward twelve-month price-to-earnings ratios (PE) hovered around 11.1 times as of the end of last week, versus 12.7 times a month ago. 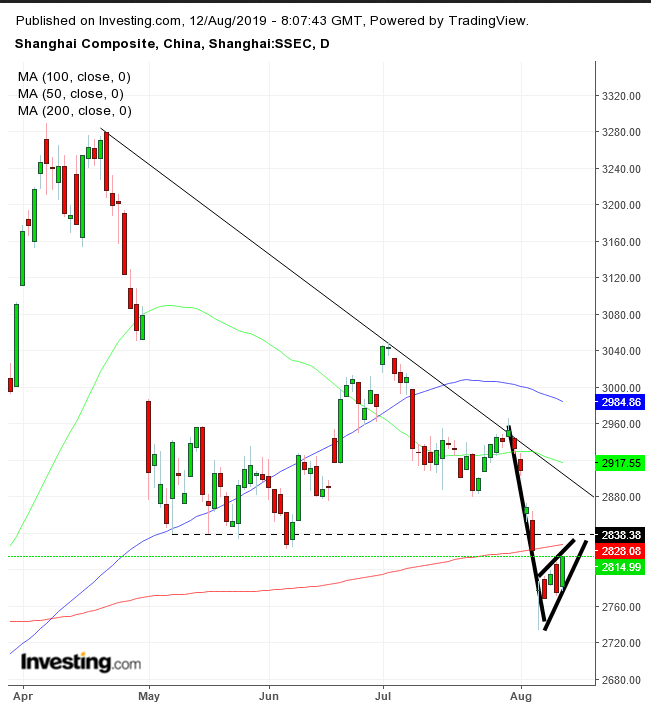 From a technical perspective, however, it appears that the market is not fully prepared to buy into valuations that risk taking another turn lower. The mainland Chinese index formed a rising flag as it crossed below the 200 DMA, after registering a lower trough, extending the downturn.

Hong Kong’s (-0.44%) was the only major regional benchmark to close in the red as civil unrest and security countermeasures in the city continued to escalate. 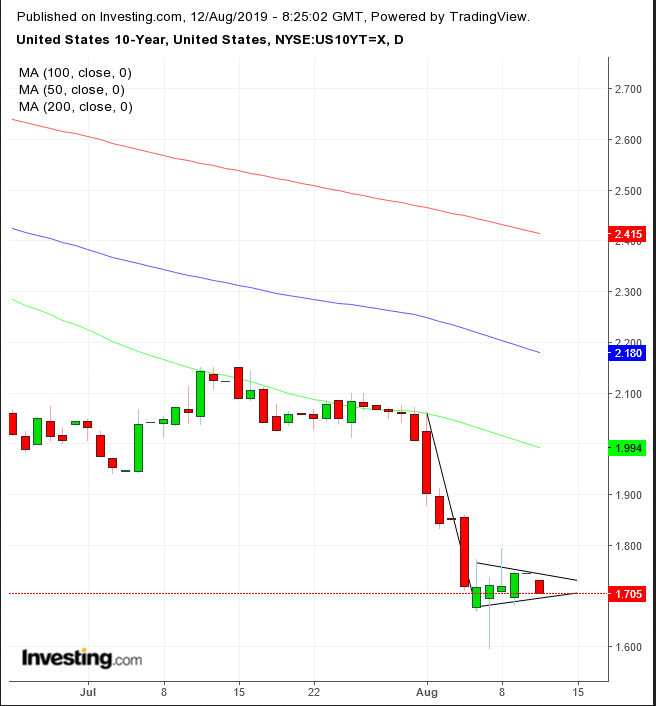 Meanwhile, the yields on Treasurys dropped to the bottom of a pennant-shaped consolidation since Tuesday. After last week’s plunge from above the key 2.00 rate to the lowest level since Oct. 2016, the current range is a set up for a continuation pattern, completed upon a downside breakout below 1.7%. Such a scenario would further weigh on stocks, with the twofold pressure of falling yields and a deepening yield inversion.

In commodities, gained ground, holding up against a strengthening .

pared Friday’s gains but traded above the neckline of a down-sloping H&S pattern.

The strengthened despite the rising greenback—pushing the USD/JPY pair to the lowest level since March 2018.