Futures on the , , and are trading in holding pattern ahead of the US market open on Wednesday, amid persistent conflict between recovery optimism and inflation pessimism.

The reflation trade held its own, as contracts on the Russell 2000 were slightly up, while NASDAQ futures were 0.14% in negative territory as of the time of writing.

Rising commodities and oil prices led the Index up almost 0.4% at the open, but the pan-European gauge has given up on those gains and is now fluctuating between breaking even and a slight gain. 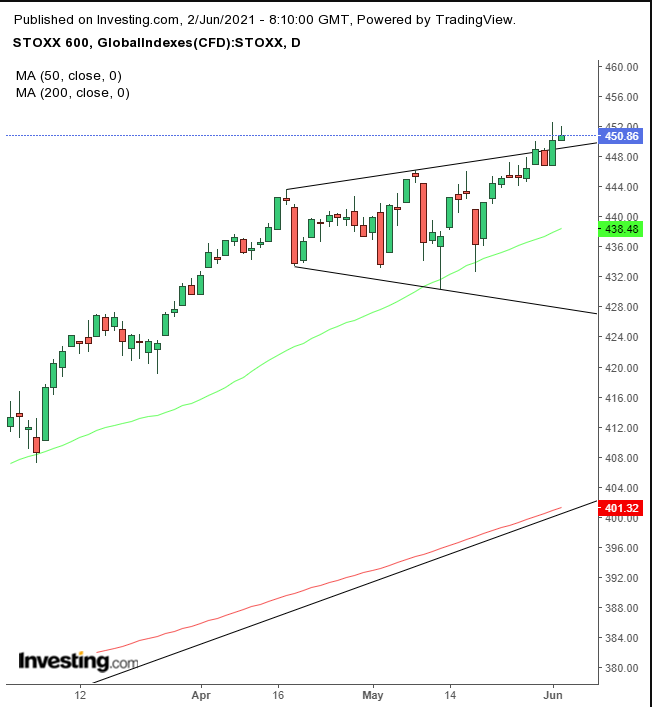 If the index remains at the same level until closing, it will have created a shooting star, confirming the resistance of Tuesday’s long upper shadow. A retreat will push the benchmark back into a broadening channel, potentially, a top.

Stocks in Asia neared a three-month high. Market narrative says that traders are cheering the expanding US . This is ironic as US stocks fell on this positive economic data, fearing it will allow the Federal Reserve to reduce its so far unquestionable economic support.

MSCI’s broadest of Asia-Pacific shares outside Japan climbed 0.1%. Japan’s outperformed, advancing with the hospitality sector as the rate of vaccination increased bringing Japan closer to an economic reopening. Perhaps the same optimism for the US and European economies increased demand for cars, pushing carmakers to new highs.

After fluctuating between gains and losses, the Index closed slightly in the red yesterday. This conflicting moves were due to the interpretation of manufacturing data that topped estimates.

While it may sound counterintuitive, there has been a trend of stocks falling on improving data. Traders increased risk on poor economic data which would mean the Federal Reserve would continue to support the economy.

Also, although orders are increasing, factories are having trouble meeting this rising demand, due to supply shortages and labor constraints. The increase in new orders was among the strongest in the last 14 years. But manufacturers reported that they have the longest delivery times since 1974, as they cope with material shortages, shipping delays and a lack of skilled labor.

May production rose at the slowest rate in almost a year, according to the ISM, increasing evidence that lingering supply, transportation and labor-market challenges are slowing factory wheels.

Nevertheless, the still gained over 1.1% while the underperformed, falling 0.2%. The small cap index, which includes US domestic firms and represents cyclicals, continues to outperform, while the tech-heavy gauge repeatedly lags.

Yields on the Treasury note were little changed.

The rose for the second day to a two-week high. 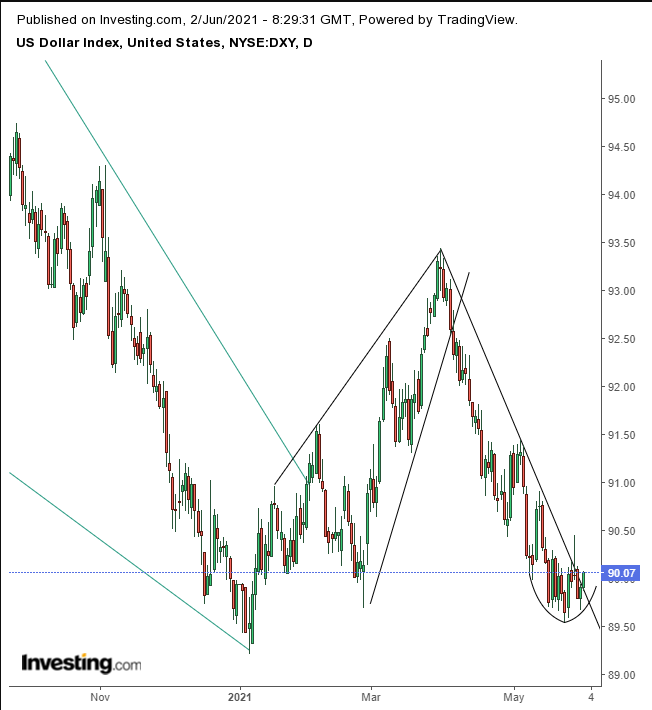 The dollar crossed above its trendline from the Mar. 31 high for the second time since Friday. Then, despite a deep penetration, it was pushed back, closing below the line. Will it break the downtrend line today, as it has been consolidating for more than two weeks? We have been waiting for the greenback to find support at the base of both an interpretively bullish wedge since the March 2020 peak, as well as a bearish wedge since the late-February low . 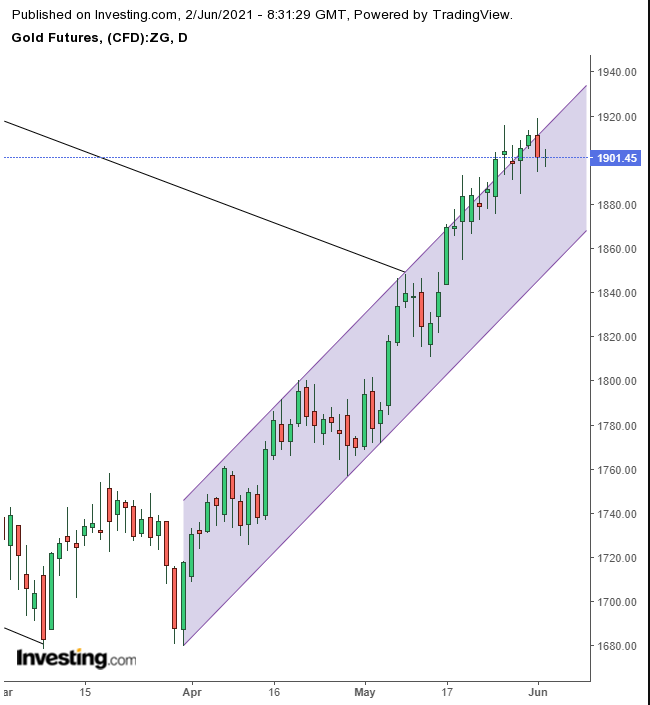 A dollar rebound would weigh on gold, which could finally enter a correction to retest the bottom of its rising channel since the Mar. 31 bottom, as well as the broken falling channel top since the 2020 record peak.

is 0.4% away from a weekly high. After the digital token more than halved in value, bulls have been espousing a wait-and-hold approach. After the bloodbath in cryptos saw BTC reach our target, we changed to a bullish call. 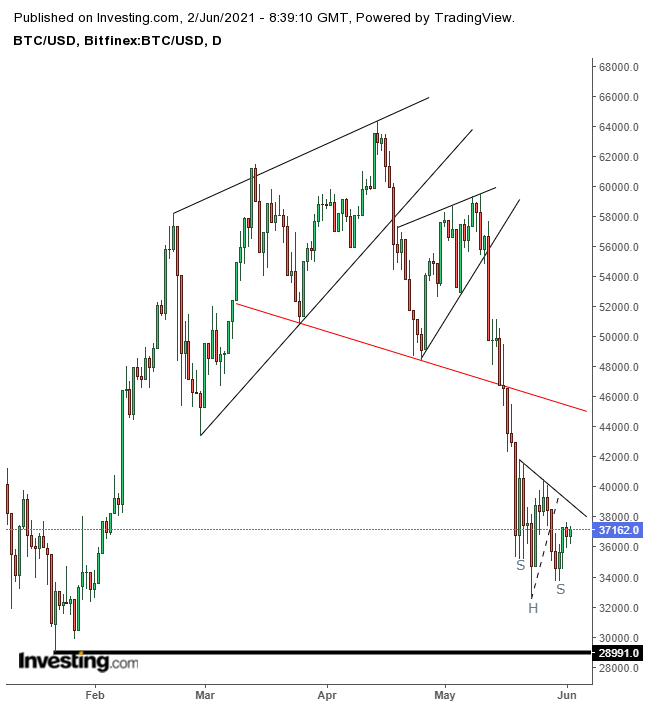 Last week we were concerned that a bearish wedge (dotted line) might bring the crypto to retest our line in the sand—the $29,000 level—but the trading pattern might evolve into a small H&S bottom.

climbed for the third straight day, extending the highest close since October 2018, after OPEC+ predicted rising demand, while prospects for Iranian oil is waning. 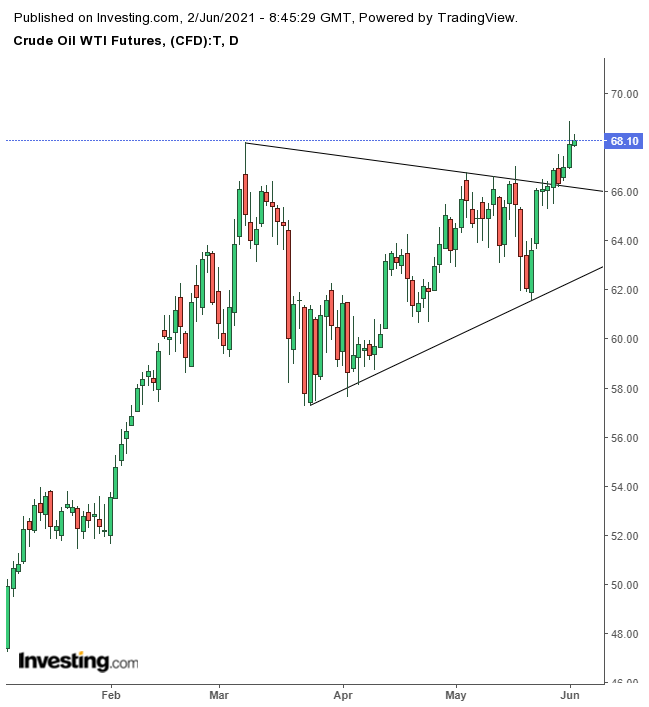 Crude trading has completed a bullish triangle, and we think it may move higher still.