Global stocks were mixed on Tuesday, with European shares crawling higher at the open, then slipping into red territory. Futures on the , and hovered more markedly in the red, weighed down by re-ignited worries of an escalation of the US-China trade war. Meanwhile, US Treasurys resumed their selloff, pushing the yield on bonds to fresh 7-year highs, pressuring risk assets yet further.

Miners and oil shares helped the start Tuesday’s session 0.11 percent higher, while a rebound in Italian stocks after yesterday’s sharp fall lifted the 0.3 percent higher at the open. However, the index not only eased from an early 0.83 percent high, but quickly joined the broader pan-European benchmark in a relatively steep descent.

Earlier, during the Asian session, the consolidated with a 0.17 percent gain after yesterday’s 2.78 percent plunge—the worst in more than three months—when traders chose to focus on deepening diplomatic tensions with the US rather than on increasingly attractive stock valuations. The rebounded 0.11 percent after yesterday’s 0.9 percent slide. However, the currency failed to cling to an earlier 0.3 percent gain.

Senior US officials reportedly voiced concerns over China’s recent currency devaluation—as much as 9 percent against the dollar—warning they are watching closely for further developments after the People’s Bank of China set the weakest daily yuan fixing rate in 17 months on Tuesday. 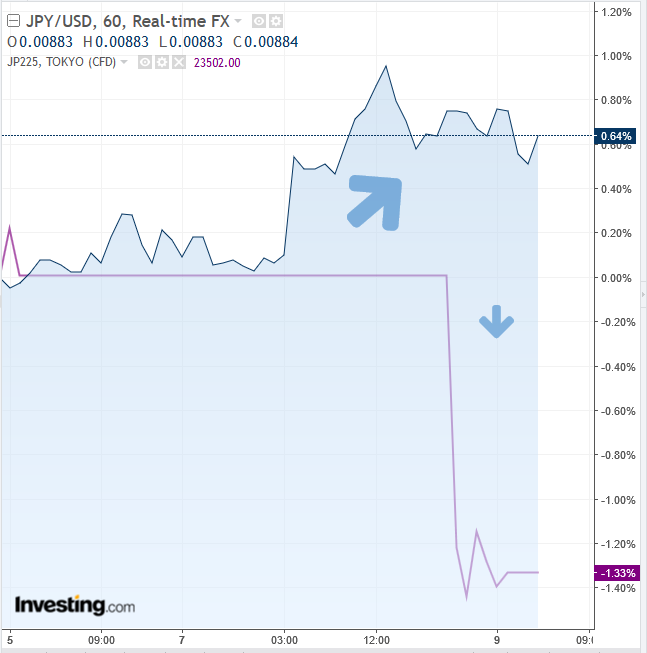 In Japan, the strengthening also impacted equities, with stocks of the ‘s export-reliant firms slipping 1.34 percent lower on aggregate. The yen’s advance then turned into a drop, but it was too late to help Japanese shares gain ground.

Yesterday’s US session saw traders buy into significant early declines. Except for the which closed higher, all major indices closed in the red for the third straight day. As well, it was mainly defensive shares that led the climb, which is not a bullish indication.

The gave up 0.4 percent. (+1.38 percent) led gains, followed closely by (+1.29 percent), demonstrating that the recent selloff was prompted by fears that rising interest rates would depress property valuations and cause mortgages and loans to become unaffordable. (+0.84 percent) came in third. On the opposite side of the spectrum, (-1.13 percent) was the obvious catalyst for the benchmark’s overall decline. Technically, the SPX found support by the August peak, successfully tested with the September trough, at the 2,863 level, which coincides with the bottom of its rising channel since April.

The technology selloff, fueled by losses in software companies and semiconductor manufacturers, pushed the to its lowest level since August 1. Since these stocks are leaders during rallies, momentum traders sell them first. Technically, the price fell below its uptrend line since April, increasing the potential for a further fall to 7,500 and the uptrend line since February. 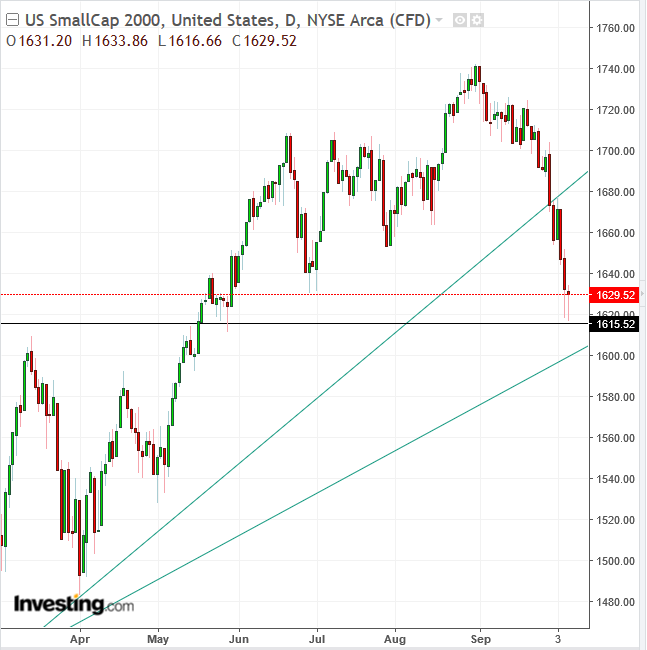 The dropped 0.16 percent, in a mirror image of the Dow’s 0.15 percent climb. This seems to indicate that traders were not concerned with the heightened US-China trade tensions. Technically, the small-cap benchmark is on the verge of a reversal, having registered a lower trough after falling below its uptrend line since February. For now, the index found support by the January and March peaks, which coincided with the longer-term uptrend line since the February 2016 bottom. A rally that would fail to overcome the late-August peak, followed by a fall below the 1,600 level, would establish a reversal.

Meanwhile, the International Monetary Fund cut its outlook for global growth for the first time since 2016—when stocks bottomed—citing the impact of the US-China trade dispute. China’s slowing growth complicates the picture, not only because of the country’s global weigh as the world’s second-largest economy, but also because it can prompt policymakers to step up currency devaluation, which would in turn deteriorate trade relations.

Amid persistent Treasury selling, which is likely to boost the and scare equity investors into further selloffs, traders will now focus on the $230 billion US Treasury auction taking place this week.

In other news, Italy’s bond yield slipped after spiking on Monday. 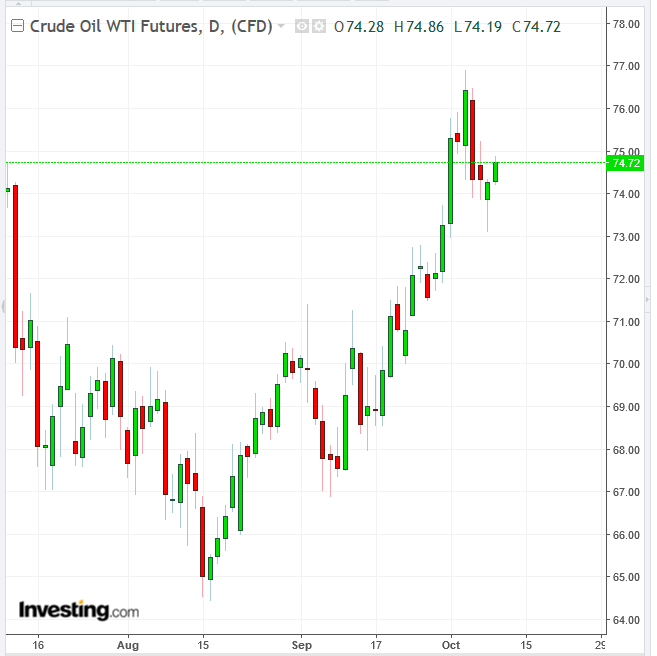 climbed toward $75 a barrel. Technically, the advance follows yesterday’s hammer, increasing the odds for traders to push prices up past last week’s near $77 peak.

futures in Dalian jumped to the highest level in almost three weeks on higher demand.