European stocks and futures on the , and are seesawing below neutral levels Wednesday, as investors find it increasingly challenging to disregard escalating global trade headwinds ahead of a meeting between President Donald Trump and European Commission President Jean-Claude Junker.

Markets are struggling to build on Tuesday’s upbeat session and earning reports, with results from General Motors (NYSE:) and Facebook (NASDAQ:) expected to confirm the upward trend.

The is inching lower and most Group of 10 currencies are showing little movement, as traders await developments from what promises to be a heated debate.

The pan-European opened slightly higher as banks posted mixed financial results: Deutsche Bank (DE:) reported a after completing half of its workforce cut target and Banco Santander (MC:) unveiled after being hit by restructuring costs of EUR300 million ($350.3 million).

Earlier, during the Asian session, Japan’s gained 0.38 percent, or 0.85 percent over two days, though it retraced from a 0.6 intraday high. China’s stimulus plans infused local traders with hope, with the most prominent beneficiaries being those who took the biggest hit over the trade war peak: steelmakers, non-ferrous metal firms and machinery makers. Technically, the TOPIX’s inability to maintain session highs formed a shooting star but after providing an upside breakout to a bullish, falling flag. This bull vs bear conflict is taking place below the downtrend line since May 21, drawing a red line for both supply and demand.

Conversely, China’s ended the three-day rally that had taken it to a monthly high. The mainland index closed 0.04 percent lower, rebounding from a 0.4 percent decline and forming a hanging man, bearish upon a lower close tomorrow, as this might stop out longs, removing demand and letting supply push prices lower.

However, that can be expected in the form of a correction after the completion of a Three White Soldiers pattern, which suggests an upward reversal of the trend.

Hong Kong’s climbed 0.9 percent, to close at the highest level since June 29, on the cusp of a double-bottom neckline.

Australia’s was down 0.29 percent, dragged lower by consumer staples, healthcare and telecoms stocks.

However, US majors retreated from their intraday highs, with the pulling back from an earlier all-time high—closing 0.01 percent lower after giving up a 0.92 percent higher open. 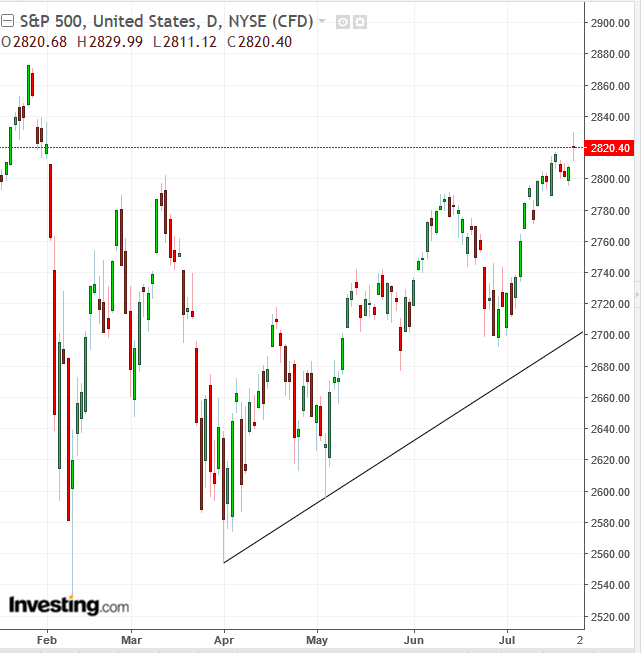 The leading US benchmark climbed to 1.5 percent away from its late-January record in its intraday high and closed 1.85 percent below its all-time high. Technically, while the price posted a higher peak in support of the uptrend since the February low, the price formed a high-wave candle. This pattern develops when prices swing wildly between losses and gains but close near the opening price, demonstrating a lack of market leadership. It is often seen before reversals, or at least before corrections. The pattern becomes clearer on the technical map, as the struggle between supply and demand escalates nearer the record high, highlighting a correction may be due after the price almost hit a 5 percent advance since the June 28 trough, at the 2,700 level.

The underperformed, falling 1.08 percent, after having reached the 1,710 levels, where supply has been overcoming demand since June 21. As we pointing out before, small-cap stocks gained ground on trade anxieties and therefore possess a negative correlation with larger-cap stocks, which are more sensitive to exports dynmics. Therefore, a decline on this index is a bullish indicator for big caps. 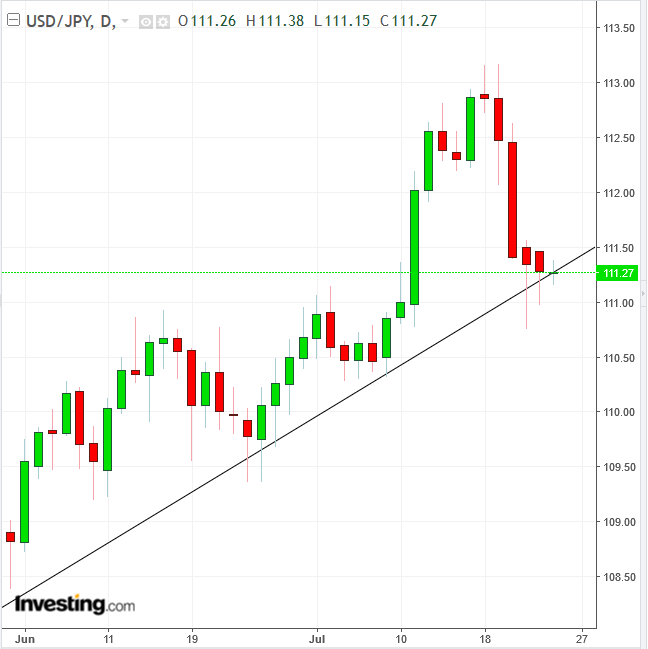 In currency markets, the strengthened slightly, climbing for a sixth straight day, even after the Bank of Japan refrained from scaling back its bond purchases on Wednesday, quashing speculation that officials may consider tweaking their stimulus policy. Technically, the price is forming a Doji, a candle projecting indecision, after two consecutive bullish hammers, right on the uptrend line since March 23.

The slipped against most of its peers after missed estimates, backing the case for the country’s central bank to keep interest rates at a record low.

held on to the gains that were triggered by Prime Minister Theresa May’s decision to downgrade the role of the so-called Brexit Department and take on a more direct lead in the negotiations with EU counterparts.

The eased after closing at a record low on Tuesday, after the country’s central bank held interest rates steady despite the higher inflation rate and the weaker currency. The move was seen as policymakers following President Recep Tayyip Erdogan, who has been amassing power and staunchly opposing rate hikes. 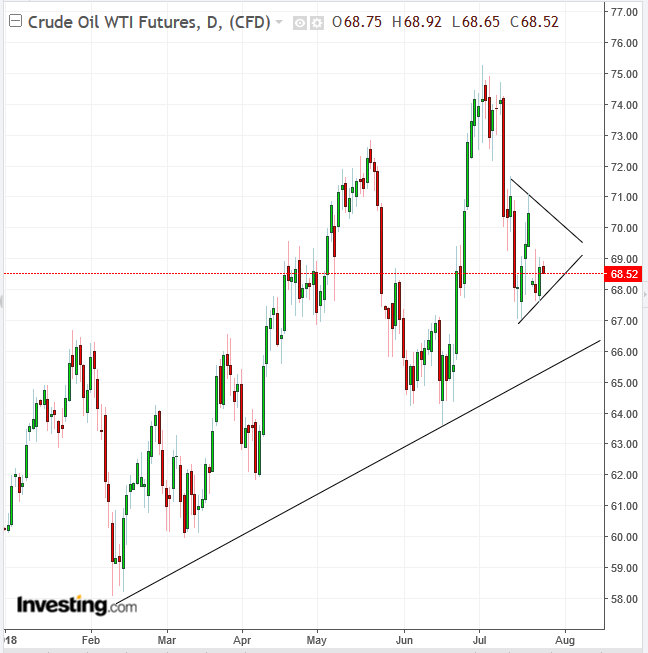 Oil ticked higher after shrank 3.16 million barrels last week, according to API. Technically, the price may be developing a bearish pennant, whose downside breakout might help bears break the bull’s uptrend line since February 9.