Wednesday’s global stock rally, which saw US equities hit some fresh new records, continued during the Asian and European sessions on Thursday, as a weaker helped shares shrug off geopolitical headwinds.

US futures on the , and are also pointing higher, suggesting the rally will resume during the US session. Investors turned to risk-on trade after US last Friday gave them some tangible confirmation that the global synchronized growth trend is intact. Upbeat job readings allowed them to focus on the economy and put aside trade war worries—to which they seem to have become increasingly desensitized. 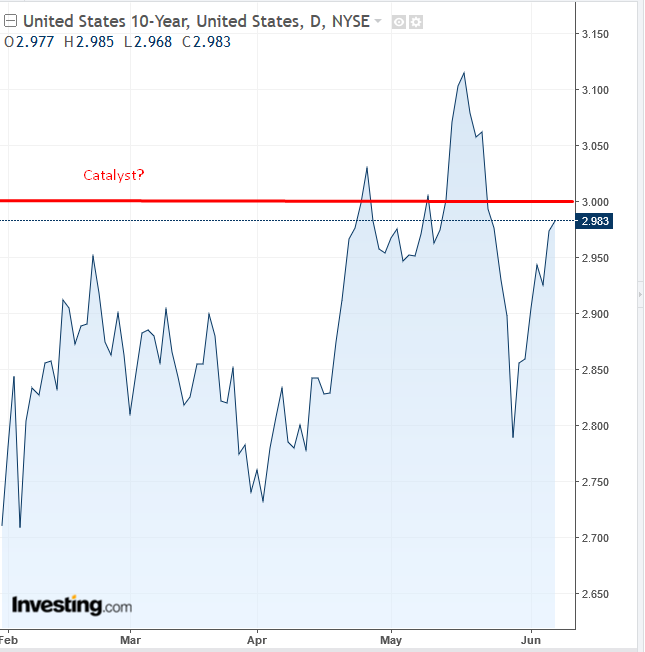 Investor rotation out of security and into growth assets also continued to push US yields higher for the sixth session out of seven. In late January, when yields on the Treasury hit a 4-year high and provided the catalyst for the first double-digit stock correction in two years, the surge underpinned an expectation for a faster pace to by the Fed.

Conversely, the current upward move is seen as bullish, as it underscores renewed investor appetite for risk. The yield on the 10-year note is now less than two basis points below the 3 percent psychological mark. Would that key level prompt another equity selloff? We don’t know, but we wouldn’t be surprised.

This morning followed Asian stocks higher, jumping on a gap and challenging the highs it had posted on Monday and Tuesday, triggered by back-to-back bearish shooting stars. Hong Kong’s outperformed with a 0.8 percent gain, but formed a bearish high wave candle by swinging between highs and lows and closing near the open. This demonstrates a lack of direction, as investors seem to act on whim rather than on well-defined plans.

Chinese shares on the underperformed, closing 0.2 percent lower after giving up a 0.4 percent gain.

Yesterday, US stock indices were boosted by an ongoing slide in the dollar. The edged higher for a fourth straight day (+0.86 percent), led by gains in (+1.85) and (+1.82 percent)—while defensive sector (-2.38 percent) was the only sector in the red.

The made its biggest leap in nearly two months (1.38 percent) and peaked above the preceding, May high, thereby extending the uptrend since April 2. 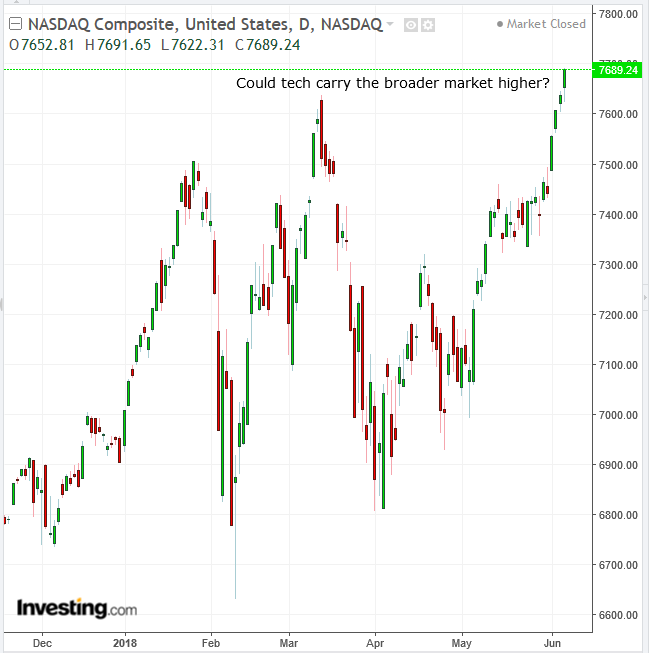 The hit a new all-time-high—after its mid-March record high—as well as its third consecutive record close on Wednesday. Finally, the further strengthened its recent record performance to close very near the high of the day.

Meanwhile, David Stockman, director of the Office of Management and Budget for former US President Ronald Reagan, dubbed the current environment a “daredevil market” in which assets are “way overpriced for reality.” Shares on the S&P 500 are at 25 times P/E Ratio, Stockman pointed out, marking this perhaps as “the end tippy top of the business cycle, with recession ahead.” The Russell 2000 is also trading at 90 times reported earnings, he added, warning against the implications of these unsustainable levels.

The veteran politician, who is also a high-profile investor, said that the SPX could easily drop to 1,600 because earnings could drop to $75 a share during the next recession. He then went on to cite the governor of Bank of India, Urjit Patel, who warned on Wednesday that the Fed’s tightening path threatens to rile the global apple cart by causing a dollar shortage. After eight years of monetary expansion—which marked unprecedented levels of accommodative policy—the implications of unwinding the central bank balance sheet both in the US and in Europe is not even remotely priced in, Patel said.

While Stockman refrained from listing the possible catalysts of a bear market, we’ve been warning of multiple headwinds that could push traders to press the sell button: 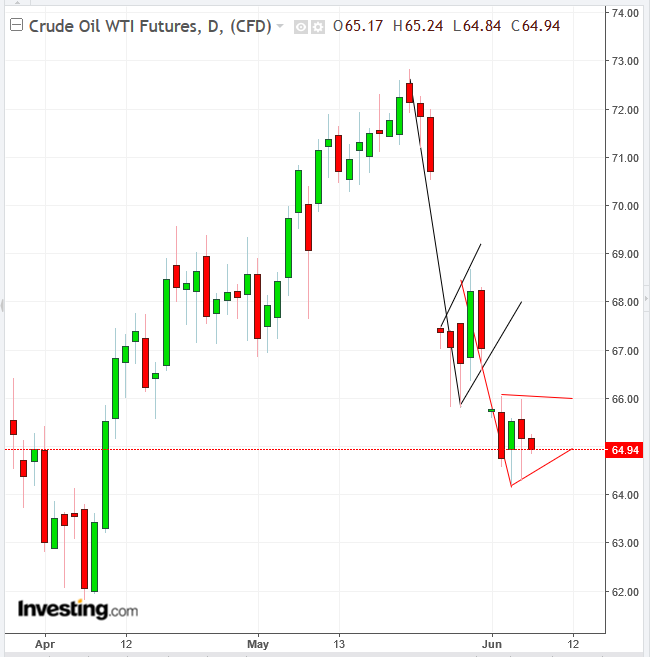 In other news, extended losses to a second day, after crude oil surged by 2.072 million barrels last week, against expectations of 2 millions. Domestic production also climbed to 10.8 million over the same timeframe, from 10.77 million barrels a day in the prior week.

Technically, the WTI price has been trading within a five-day consolidation in what appears to be a second consecutive continuation pattern within a falling trend. What could trigger a downside breakout? Most likely, any positive confirmation that the US government asked Saudi Arabia and other OPEC members to increase oil production by 1 million barrels per day, which equals the expected supply gap from potential output glitches in Iran. 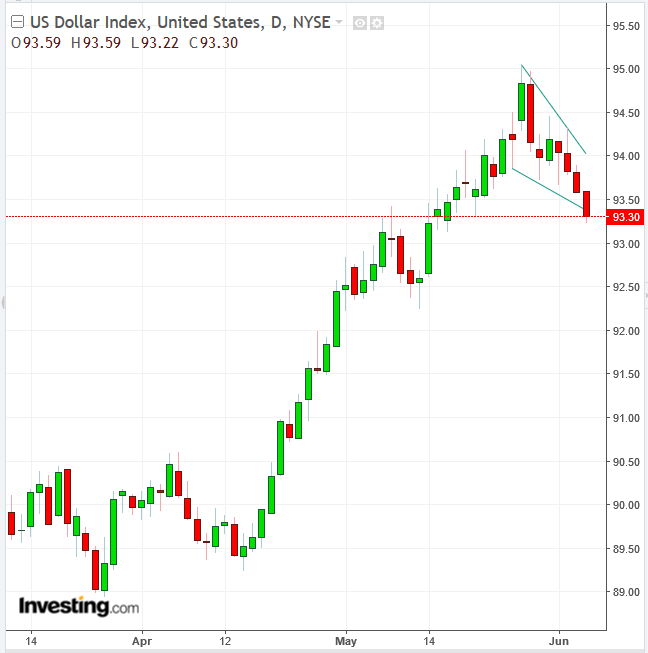 A Reuters poll showed that almost 60 percent, or 35 of 60 analysts, believe the recent climb of the USD could end within 3 months. Ten analysts forecast the greenback will end its rally a lot sooner—within a month. According to the poll, the single headwind that FX traders and investors have failed to fully price in is the potential for other global central banks to step up their hawkish stance.

Currently, what should have been a bullish falling flag in the dollar chart seems to be breaking down—which would support the view that a USD decline is already taking place.