Equities in Europe and Asia and US futures on the , and all traded higher on Tuesday, pressing forward with a rally that was triggered by last week’s favorable US and further boosted by a bullish outlook for the upcoming earnings season. The upbeat momentum allowed investors to place trade war fears on the back burner.

Energy and resource companies helped the pan-European seal a sixth straight advance, though profit-taking by traders is paring much of those early gains. In currency markets, found its footing after the latest high-ranking resignation over PM Theresa May’s “soft” Brexit plan–with Boris Johnson and David Davis stepping down from their roles as foreign secretary and Brexit secretary on Monday and Sunday respectively (see below for more analysis on the pound).

Regional markets also lost steam through their trading sessions. The , Hong Kong’s , and South Korea’s gave up half or more of the day’s gains.

Japan’s outperformed, climbing for the fourth consecutive session. Australia’s was the only key Asian benchmark to slip lower. However, this setback can be viewed as a correction, a return-move following a bullish pennant pattern; the Aussie index is the only one in the region currently posting an uptrend.

Today’s rally follows a strong performance during yesterday’s US session, which saw shares advance to their highest levels in nearly a month. The climbed 0.88 percent, helped by gains in (+2.32 percent). Two of the only three sectors sliding in red territory were defensive: (-3.08 percent) and (-0.38 percent). This provides further evidence of a markedly risk-on market. 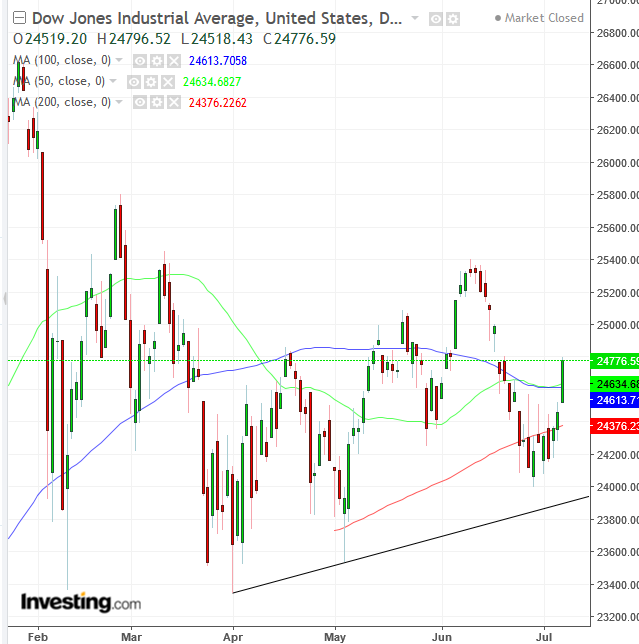 This shift in sentiment is also backed by the fact that both the SPX and the have achieved technical milestones.

The former reached the top of a consolidation since late February, as it tests the 2,800 round psychological level, after bouncing off the 100 DMA and crawling above the 50 DMA last week, in a sign of support for the price.

The Dow Jones pierced through the 50 DMA and 100 DMA, closing at the top of the session, showing that bulls were in charge. Investor willingness to bid the mega cap benchmark higher, even after its week-long slump under the 200 DMA (red), clearly illustrates this sentiment reversal.

With US President Donald Trump focusing on his pick for the next Supreme Court judge and on his upcoming trip to Europe, trade war headlines have eased from their peak on Friday, when the US formally pressed ahead with tariffs on $34 billion worth of Chinese products and Chinese officials responded with comparable levies.

As investor focus moves to the corporate earnings season, which kicks off later this week, there’s a growing expectation that strong company results will complement the recent run of positive economic data. 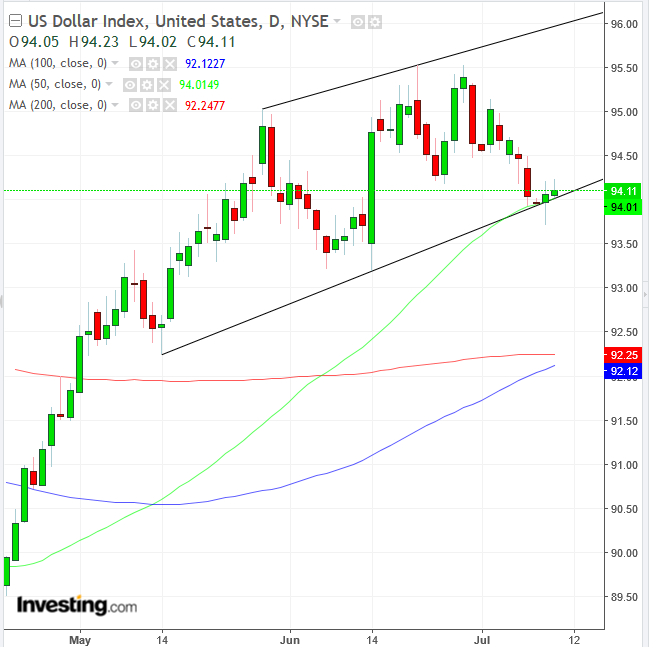 The stabilized for a second day, finding support at the 50 DMA, as the 100 DMA (blue) moves past the 200 DMA (red), demonstrating that, more recent prices are outperforming older levels. More notably, yesterday’s rebound, which was extended today, places the USD price back into its rising channel. 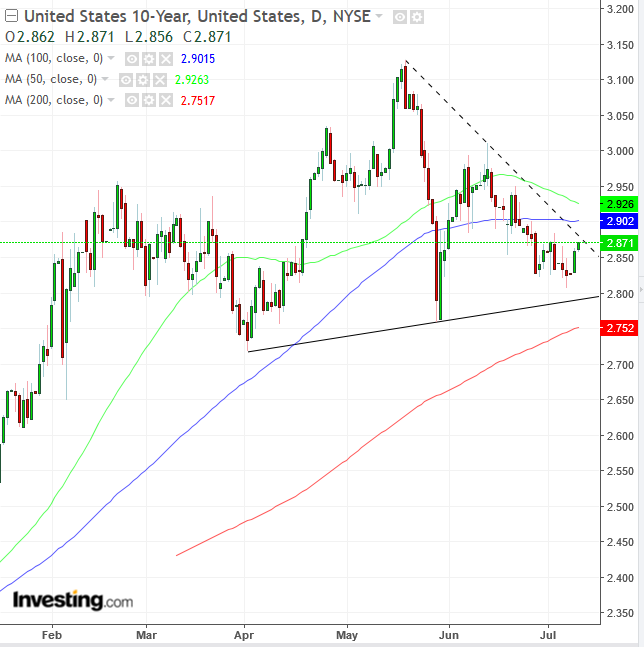 The dollar may have benefited from the same dynamic that pushed US yields higher: investors are rotating funds out of bonds and into risk assets. However, yields on Treasurys may find resistance under the downtrend line since the May peak, compounded with the 100 DMA (blue) and 50 DMA (red).

Additionally, should the 10-year yield start tumbling lower, it would complete an H&S top reversal, which coincides with falling below the 200 DMA (red), a telltale sign of how significant this level is. 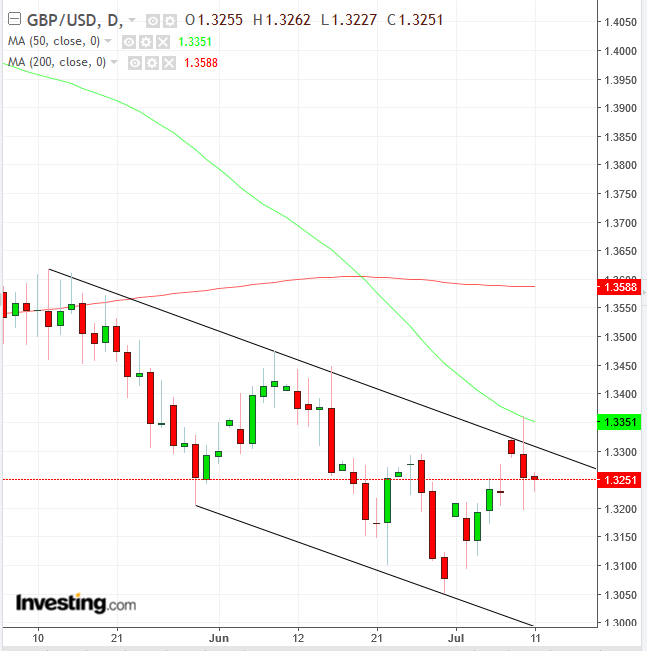 In Europe, the pound rebounded from a plunge after Johnson became the third high-ranking minister to resign in under two days over May’s Brexit strategy, which is seen by many hard Brexiters as a watered down version of what the country should pursue in negotiations with the EU. This latest development within May’s cabinet increases the probability of a leadership challenge, which would throw the current government into chaos.

However, despite losing a third of her cabinet in just nine months, May still holds the numbers to remain in power, which reassured traders into buying the dip on Tuesday. Technically, however, today’s advance is considered a correction within a downtrend, as the price fell in the two preceding sessions, confirming the resistance at the top of a falling channel, compounded with the 50 DMA.

held near $74 a barrel in New York as US were seen dropping lower for the fourth week out of five.

Turkey’s recovered from an extension of yesterday’s selloff, after President Recep Tayyip Erdogan named his son-in-law as the new economy tsar, removing the last member of a market-friendly financial team that has been gradually pushed to the sidelines. The move drove the lira to its deepest plunge since the failed governmental coup in 2016.