European shares along with futures on the , and pared some of yesterday’s losses on optimism for a resolution to the US-China trade dispute, even as stocks in Asia mostly declined.

The climbed higher for the first time in three days, helped by miners and travel firms.

Earlier, Asian trade was mixed. All major averages in the region except for China’s fell at the open, following Wall Street’s tech slump during yesterday’s US trade, which was exacerbated by news of falling demand for Apple’s (NASDAQ:) iPhones.

Most indices, however, recovered on reports that China’s Vice Premier Liu He will visit the US to kick-start talks. Japan’s opened 1.7 percent lower, underperforming its regional peers, extended the drop to 3.53 percent, but eventually managed to trim losses to 2.06 percent. Conversely, the Shanghai Composite opened 0.28 percent higher and kept gaining ground, to close 0.93 percent in the green, near the top of the session.

Yesterday, US stocks started the month on the wrong foot, as all major indices tumbled about 2 percent, with the nearing the 3 percent mark. All major averages also closed near the bottom of the session, as there were no takers on the dip, and each suffered a three day slide, except for the , which dropped for a second day.

The slipped 1.97 percent lower, for a combined three day loss of 3.12 percent. Every sector except for (+0.21 percent) closed in negative territory. (-3.52 percent) led the declines, after Lumentum Holdings (NASDAQ:), a major Apple supplier, said demand for iPhones was waning. Technically, the price fell back below its uptrend line since the February 2016 bottom as well as the 200 DMA. 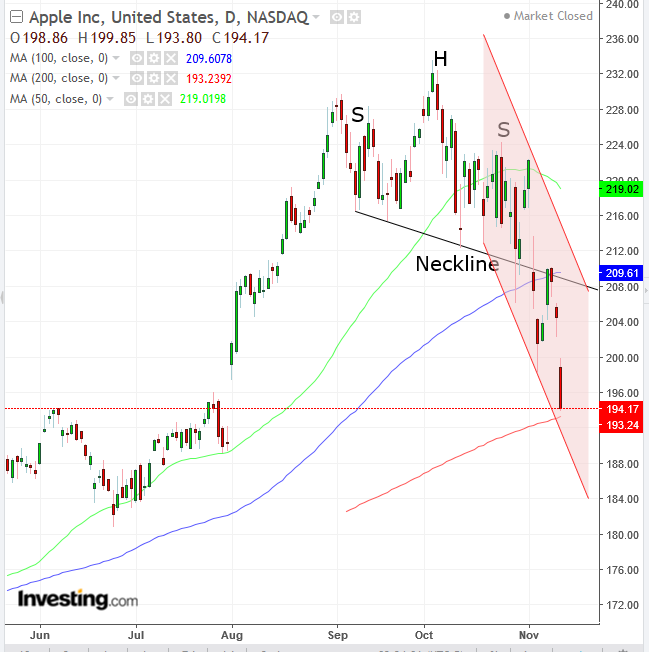 Apple took a 5.04 percent hit yesterday. The mobile phone and personal computer manufacturer is trading within a falling channel after completing a H&S bottom. The price is $4 away from our target. It also returned to the neckline, as we forecast.

The Dow gave up 602.12 points, or 2.32 percent, for an aggregate 3.06 percent over two days. Technically, while the price fell back below the 50 DMA and 100 DMA, it remains over a full percentage point above the 200 DMA and over 3 percent above the uptrend line since the last correction, in early 2016.

The NASDAQ was the main laggard of yesterday’s session and for the current equity rout, giving up 2.78 percent, for a combined three day drop of 5.01 percent. The tech-heavy index was weighed down by Apple’s setback.

From a technical perspective, the price extended a drop below the 200 DMA after crossing below it yesterday. The 50 DMA crossed below the 100 DMA. The price is still about 3 percent above its uptrend line since the end of the previous, February 2016 correction. 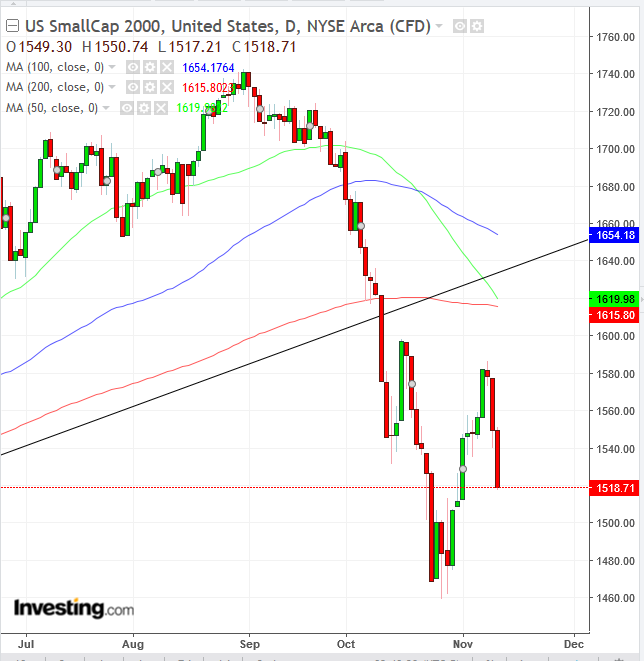 The 50 DMA is about to cross below the 200 DMA, executing a Death Cross, a dreaded technical phenomenon, which gets much attention from mainstream Wall Street, not just among technical analysts. It demonstrates that recent prices are weakening over a longer than expected period, in this case four times longer. 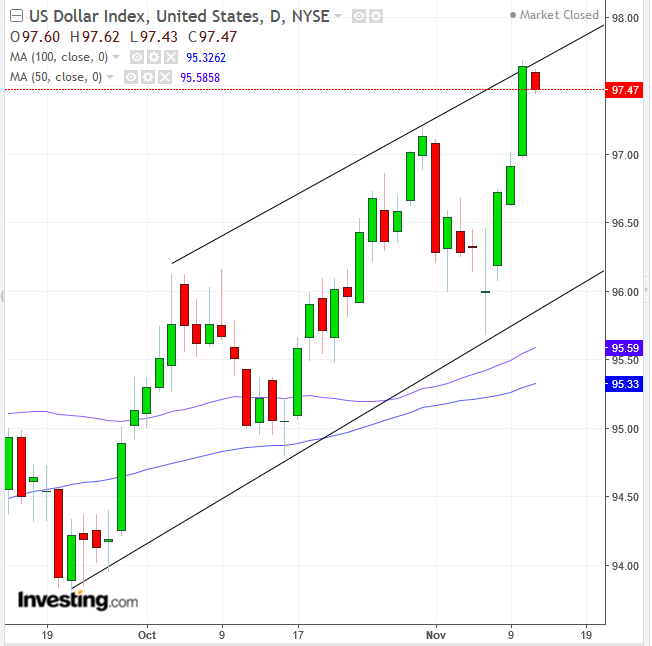 The and the , two countries that rely on China demand, edged higher on the reports that the US-Sino trade tiff could be inching closer to a resolution. The , a proxy in times of uncertainty, is ticking lower. That, however, has become an unreliable indicator of market sentiment, since the dollar has overtaken it as the preferred safe haven currency.

The recovered from a three-day loss on reports from both EU and UK negotiators that a Brexit deal may be sealed in a matter of days. The rebounded from hitting the weakest level against the dollar since June 2017, pressured by Italy’s budget headwinds. 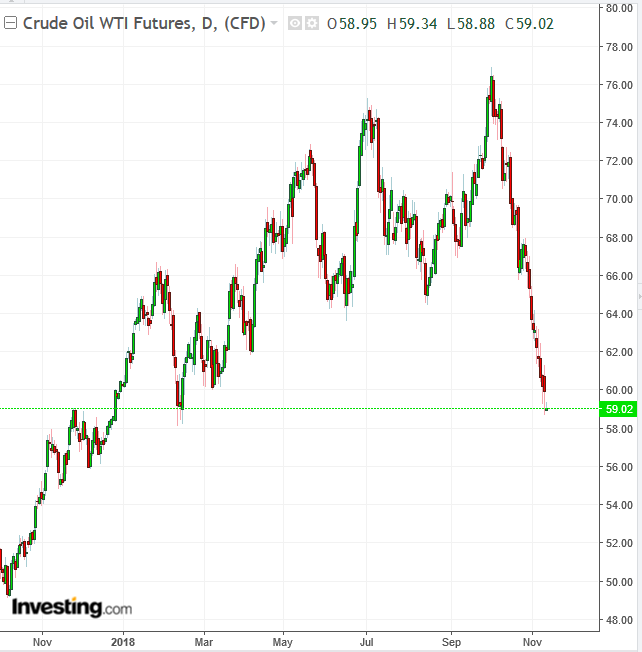 slid below $60 after a 12-day decline, hitting its longest losing streak on record after falling into a bear market—defined as a 20 percent setback from the recent peak—last week. Selling built up after US President Donald Trump tweeted that the Saudi Arabia and OPEC proposed supply cuts were insufficient. The two main culprits appear to be the outlook for reduced demand, due to signs of a global economic slowdown, and rising US production. As of now, it seems that OPEC can’t tame the price declines. The WTI price reached the lowest level since February and is set to close at the lowest level since November 2017. Technically, the price found support by the November 2017 peak-February 2018 trough.

While Apple received much of the attention, global growth risks and the Fed’s may also have played a role in yesterday’s selloffs. While US economic data is positive, figures from Europe and China are not equally upbeat. As to higher interest rates, it appears that investors’ continuous selling may also be a reaction to what they perceive as an unfavorable pace of tightening for companies as well as shareholders.

The Fed on the other hand doesn’t seem too concerned about investor worries. San Francisco Fed chief said she backs “gradual normalization of monetary policy,” supporting rising rates. Daly added that a market correction is healthy for stocks with overly high valuations.