This morning, European equities crawled higher, as have US futures for the and , after stocks in Asia, except for those in Japan, retreated. US yields—ahead of the , due out later today—extended a slow advance to a fourth day, boosting the which in turn pushed emerging market currencies lower.

The robust global mid-session alongside higher US futures raises trader hopes that the US equity market advance will resume today, even after stocks in Asia declined. This could signal that global traders, unlike their Asian peers, have moved past yesterday’s US-NK summit, focusing instead on the upcoming trifecta of central bank meetings this week including an expected rate hike today from the Fed.

Even South Korea’s —seen to be the biggest beneficiary among stock benchmarks from a denuclearized north—gave up a 0.35 percent advance; it ultimately turned into a 0.05 percent slide. On the other hand, the index did bounce from a deeper, 0.3 percent retreat. Technically, the price was pushed back by a downtrend line since mid-May, culminating in Thursday’s shooting star, formed when an advance loses steam. 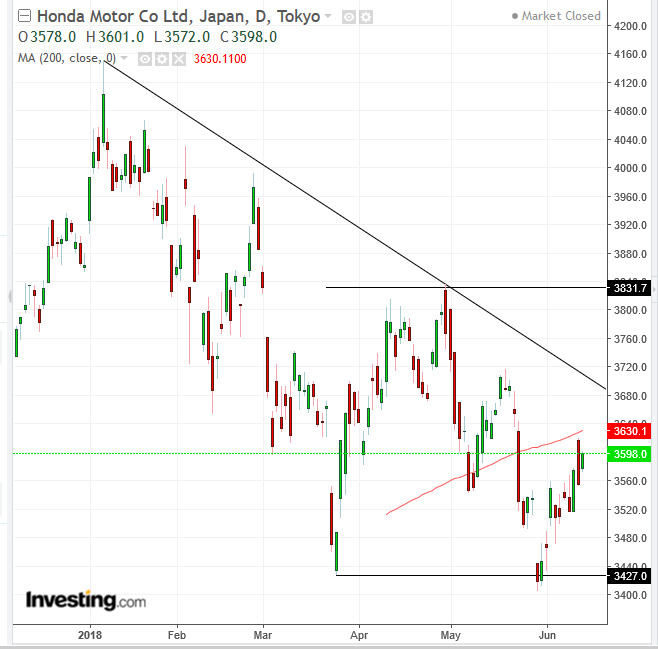 Technically, the price in Tokyo is nearing a downtrend line since late February, which itself is guarded by the 200 DMA, providing a shorting opportunity. Conversely, a breakout above 3,831 would complete a double bottom reversal. 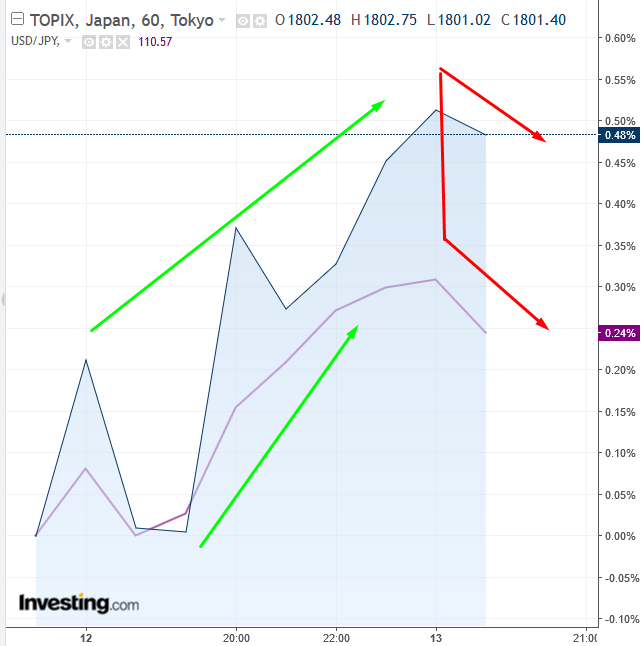 Shares listed on the rose (+0.5 percent), boosted by a weakening yen, which fell for a third straight day, ending a week’s consolidation and taking on the May 21, 111.41 dollar-yen high.

Note in the chart above, equities rose in tandem with a falling yen, as the moved higher, followed by both retreating simultaneously. Like multinational US firms, Japanese companies are hyper-dependent on exports for growth. A weaker currency lowers the exchange rate for foreign importers, boosting sales.

The , which is ‘burdened’ by mega cap multinational companies that have grown past just domestic markets, was the single US major index that bore the brunt of the trade uncertainty, the lingering effect of Us President Donald Trump’s trade policies that were on full display at this past weekend’s G7 summit. In our opinion, this oldest US index is the single purest indicator of the market’s actual opinion on global trade. 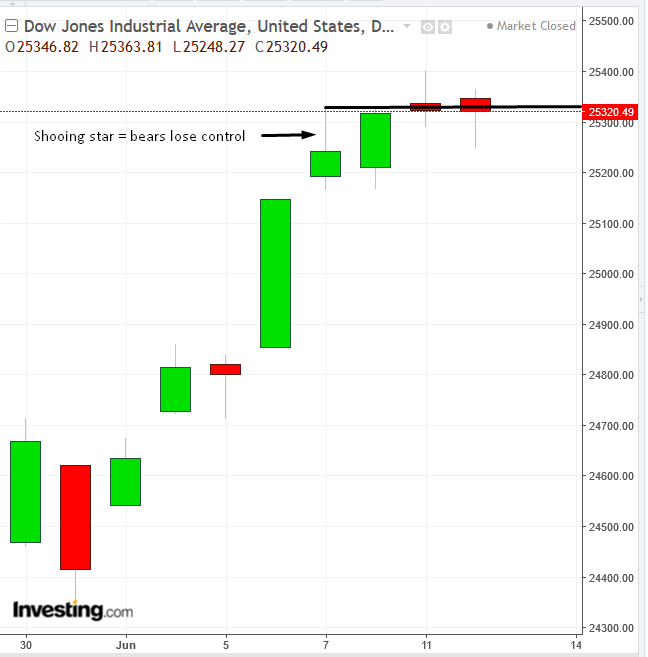 While the S&P 500 posted a new peak, its gains were modest. Moreover, technically, its trading pattern demonstrated uncertainty.

Finally, the bearish presence at the height of yesterday’s SPX shooting star won out for a second consecutive day. Internally, defensive (+1.15 percent) far outperformed among the sectors. However, to be fair, though the defensive utility sector had the most demand on an absolute, per sector basis, the sector’s 0.49 percent boost had an incomparably bigger impact. Its weighting in the SPX is 25.84 percent, versus a far less significant 2.94 percent for Utilities.

While traders have priced in a 92.5 percent probability for a this year after the March increase, a much bigger impact on markets would be the Fed’s outlook for monetary tightening amid a surviving expansion, even this late in the business cycle.

Projections from the Fed’s March meeting suggest a benchmark rate of 2.1 percent at end of 2018, based on the median forecast of central bank policymakers, which would mean three rate hikes in total this year. However, six-year high inflation has led some to expect a total of four hikes for the year. US rose 2.8 percent in the last 12 months, up from 2.5 percent in April. 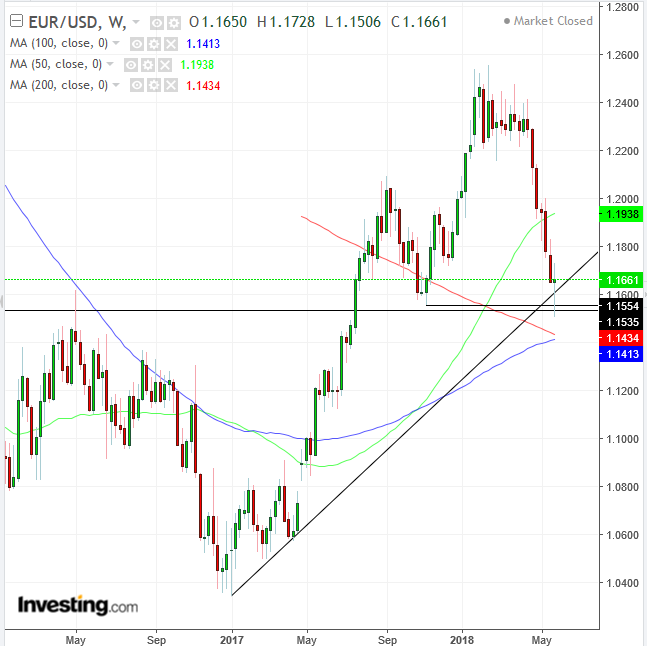 Based on remarks last week by the ECB’s chief financial economist, the European Central Bank appears to be set to end QE during its Thursday policy meeting, making a reduced supply of stronger, while in the same time the dollar is expected to take a hit on Trump’s ongoing trade war.

Technically, the EUR/USD has crossed above its downtrend line, signaling a potential trend reversal. Since then, it has increased the probability of an uptrend by developing a pennant, a continuation pattern, completed with an upside breakout. Also, the MACD shows that recent prices are advancing relative to older prices.

The Bank of Japan’s June and takes place on Friday. An ally of BoJ Governor Haruhiko Kuroda said a strengthening US economy may push the USDJPY higher. He doesn’t think that Kuroda will intervene before it reaches 125.00 to 130.00, according to The Japan Times.

From a technical perspective, the dollar strengthened against the yen after yesterday’s signing of the denuclearization agreement between the US and North Korea, when traders rotated out of safe havens into risk assets. As the pair climbed, it yesterday crossedover the 200 DMA, extending its advance today, something many traders consider a bullish event.

The hit a 16-month low of 20.724 pesos to the dollar while the dropped to a six month low of 13.345 per dollar, extending its decline, triggered by disappointing data last week.

dipped after data from the American Petroleum Institute showed a of 833,000 barrels in U.S. crude stockpiles. Analysts had expected a decline of 2.7 million barrels.

Yesterday fell to a 2-1/2-month low of $6,461 at the Bitstamp exchange, on mounting regulatory and security concerns, after the weekend hacking of South Korean cryptocurrency exchange Coinrail.