HomenewsAnalysisPalladium Isn’t Dead Yet, Its Next Wave Is Coming

Palladium Isn’t Dead Yet, Its Next Wave Is Coming

In case, you’re wondering: Palladium is still alive, and it’s next wave, like the COVID-19, is coming—though in a good way.

Having beat gold prices , palladium has stayed at a premium to be crowned by the media as the costliest-traded metal—actually that honor goes to , a precious metal that’s so scarce that it’s just as well that palladium wears the crown.

The spot price of palladium scaled a record high of $2,881.33 an ounce on Feb. 23, just before the coronavirus pandemic began crippling the world economy. 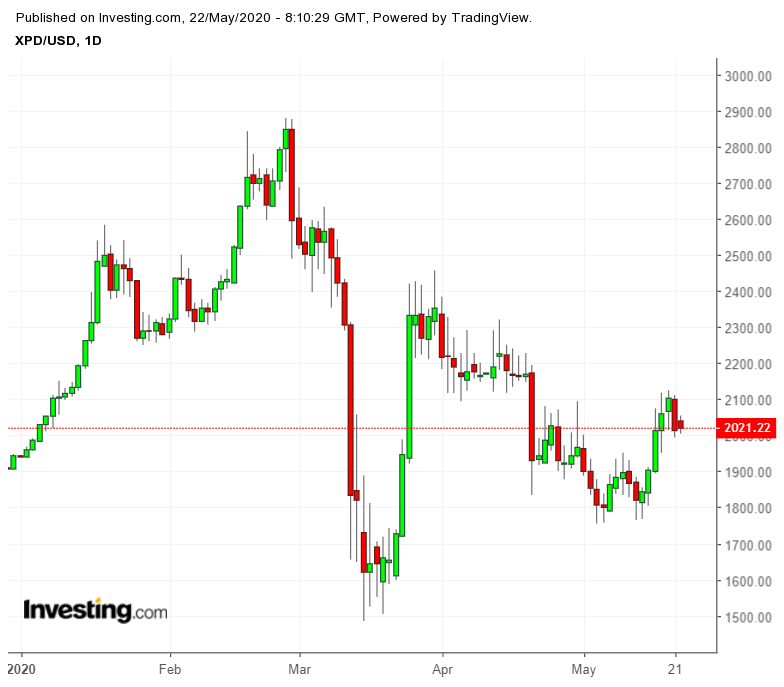 Until then, explosive growth in the world automotive sector, led by China, had fueled highs almost every day in palladium, a silvery-white metal critically short in supply but also critically important as a component to catalytic converters and emissions purifiers of gasoline engines.

Relatively, and rhodium—which act as catalytic converters and emissions purifiers in diesel engines—haven’t lost much ground either.

London-based precious metals consultancy Metals Focus said regardless of the impact of COVID-19, it expected supply of palladium to stay in a deficit and platinum in a surplus, through the year.

“Later this year, we expect palladium prices to rally in spite of the current COVID-19 related challenges,” the consultancy said.

“As physical demand improves, we think the price is likely to return to the mid-$2,000s in the second half of 2020 and we would not be surprised if the February peak were approached before year-end.”

It would be the smallest such deficit since the palladium market was last in surplus in 2011, according to Metals Focus data. The deficit was as much as 1.29 million ounces in 2016.

Despite the disruption to the global auto market from COVID-19 and the sharp slide in its prices, spot palladium remains up for 2020, with a near 4% gain on the year versus a previous 47% at the height of February’s rally.

Specialty metals refiner Johnson Matthey (LON:) concurs with the outlook by Metals Focus. The world’s largest secondary refiner of Platinum Group Metals, which include palladium, platinum and rhodium, says South African supplies of PGM were forecast to fall by at least 20%, while the collection of secondary materials will also be severely disrupted.

That aside, palladium’s demand will be location-specific as coronavirus impacts different places at different times in different ways, Rupen Raithatha, Johnson Matthey’s director of market research, told Reuters in a recent interview.

“The cold market balance, whatever it may be in the end, may not be the biggest determinant of price direction and volatility when you have large parts of the market offline and the potential mismatch between supply and demand coming back.”