The British Pound rose in Asia Pacific trade amid a burst of Brexit-related optimism. A Times report claimed that the UK and EU have reached a tentative deal on financial services. Separately, the FT reported that UK Brexit Secretary Dominic Raab expects to conclude a final accord by November 21.

The spotlight now turns to the Bank of England for the so-called “Super Thursday”. This amounts to a policy update, minutes from the latest meeting of the rate-setting MPC committee and a new quarterly Inflation Report (QIR), the main vehicle for communicating forward guidance.

The markets’ response may ultimately hinge on what Governor Mark Carney says at a press conference following the release. No policy change is on offer and updated economic forecasts are likely to be made moot in short order by the approaching Brexit deadline, now just five months away.

Specifically, traders will want to hear just how much economic pain the central bank expects in the event of a “no-deal” outcome. A fire-and-brimstone take from Mr Carney may weigh on Sterling, pushing it back from intraday highs while more tranquil rhetoric could give the currency a further lift.

The Australian and New Zealand Dollars traded sharply higher amid hopes that China will step up stimulus efforts as efforts to clean up domestic debt and an ongoing trade war with the US weigh on growth. The Politburo agreed that bolder counter-cyclical measures are needed, according to a statement.

So far, assorted one-off measures including a reduction in reserve requirement ratios for local banks, tax cuts and a loosening of regulatory burdens have failed to create a meaningful backstop. More of the same coupled with a large fiscal spending increase – on infrastructure, say – may now be in the cards.

See our forecasts for currencies, commodities and equities to learn what will drive prices in Q4! 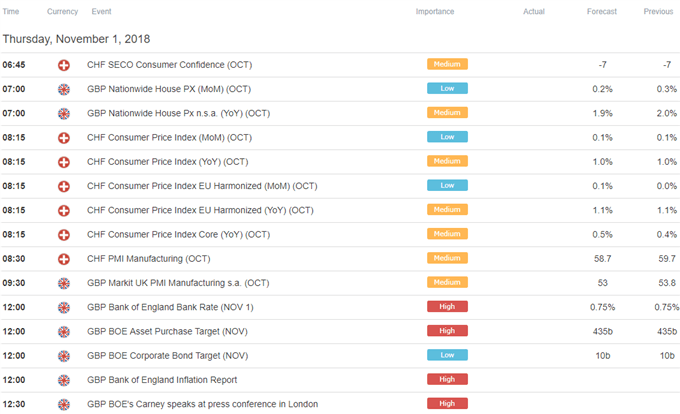