Earlier this week, Quebec’s minister of finance released his first pre-election report on the state of public finances. This report is essentially a fiscal update and the last piece of information available for bond investors before the Oct. 1 election.

The report shows a solid improvement in the province’s budgetary balance. Underpinned principally by a stronger GDP deflator in 2017 boosting taxation revenues, the budgetary balance for the next five fiscal years has improved by $950 million annually compared with the 2018 March budget. For instance, the fiscal surplus for FY 2017-18 is estimated at $4.6 billion (1.1% of nominal GDP) before the $2.3-billion contribution to the Generations Fund (see chart). This surplus is significant considering that program spending soared by 5.9% last year. As required by law, the remaining $2.3-billion surplus will be dedicated to the stabilization reserve. The stabilization reserve reached a significant $6.9 billion at the end of FY 2017-18 (see chart).

Since the elections will be held in six weeks, it is difficult to assess how the $950-million annual fiscal improvement will be used overtime. The electoral orientations of political parties suggest this money may be used more towards additional programs and capital spending, rather than towards lower taxes and further debt reduction. For now, the $950-million upside to the budgetary balance reduced the need of using the stabilization reserve in FY 2018-19, FY 2019-20 and FY 2020-21. Recall that this was required in the March 2018 budget to balance the books and to make the desired contribution to the Generations Fund over time (see charts).

Finally, the auditor general of Quebec reviewed the pre-election report and found that the province’s financial framework and economic forecasts presented are “plausible.” Thus, the risk of finding an unexpected fiscal hole after the election (caused by overrun costs or an understated debt for instance) is very low.

Bottom Line: The pre-electoral report reveals further improvement to Quebec’s fiscal situation and outlook. This should help the government to achieve its debt-reduction objective: the gross debt-to-GDP ratio is now forecast to fall to 42.4% by FY 2022-23 (see chart). This strategy is particularly rewarding at a time when the interest rates are rising. 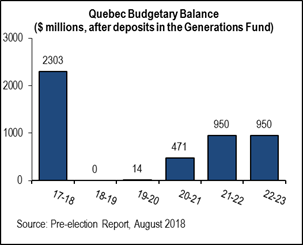 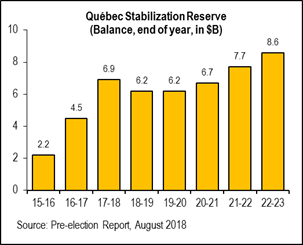 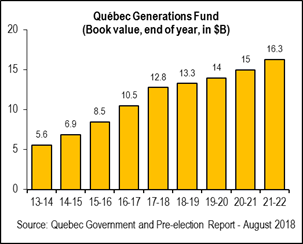 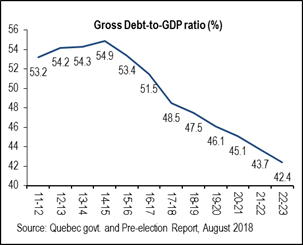