Canada’s dollar will rise over the coming year as the Bank of Canada hikes interest rates and higher oil prices become more supportive of the currency, a Reuters poll showed, but it will take a NAFTA trade pact deal to trigger more optimistic gains.

The poll of more than 40 foreign exchange strategists predicted the Canadian dollar, which has been pressured this week by a diplomatic dispute between Saudi Arabia and Canada, will edge higher to C$1.30 to the greenback, or 76.92 U.S. cents, in three months, from C$1.3023 on Wednesday. 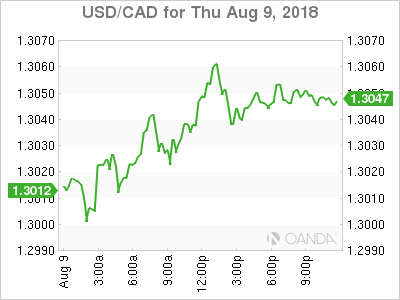 The currency is expected to climb further to C$1.26 in a year, matching the forecast of the July poll.

“The core of the outlook for us is that Canada has one of the very few central banks, arguably the only central bank, that is on a hiking cycle that is broadly comparable to what the Federal Reserve is doing,” said Ranko Berich, head of market analysis at Monex Canada and Monex Europe.

The Bank of Canada, which expects the rate of the country’s economic growth to accelerate to 2.8 percent in the second quarter, has raised interest rates twice since January to match the pace of the Federal Reserve this year.

Money markets expect the Bank of Canada to hike once more by December. Its benchmark interest rate is 1.75 percent.