With less than a month away before the July 11th Bank of Canada monetary policy decision meeting, we continue to expect the BoC to hike its policy rate by 25bps, although key developments could rapidly shift the outcome toward another pause.

First, the retail sales report for the month of April and the CPI report for the month of May will be released this Friday. The recent robust increase in disposable income (5.1% year-over-year in 2018Q1) driven by hours worked and wage growth should normally lead to a respectable pace of growth in retail sales. However, challenging weather conditions reported by some Canadian retailers weighed on consumer traffic this spring. Thus, we expect a modest 0.2% m/m increase in retail sales for April.

We see the CPI report as potentially a more important market mover than the retail sales number since total and core CPI inflation have been increasing steadily at this stage of the business cycle. We expect a robust 0.4% m/m CPI increase for the month of May, driven primarily by higher food, transportation and shelter costs (consensus also at 0.4% m/m). If our call turns out to be right, total CPI will stand at a 7-year high of 2.6% year-over-year. Under normal circumstances, such an elevated headline inflation figure should reinforce the odds of a 25bps policy rate hike on July 11.

This being said, the BoC will also need to factor in its decision the impact of the steel and aluminum tariffs announced by the U.S. White House at the end of May. These tariffs do not constitute a major negative shock to the Canadian outlook. Furthermore, the recent Canadian dollar depreciation is currently acting as a partial buffer against the American tariffs. Also, the economic costs associated with the first round of tariffs announced last week by the U.S. on $US50 billion of Chinese goods and reciprocal retaliation by China are relatively manageable considering that nearly $US15 trillion in international merchandise are traded every year globally (see chart below).

The trickiest part is not the unfavourable trade developments that have occurred until now, but the increasing possibility of a rapid and dramatic escalation in the global trade war in the months ahead. The biggest threat for Canada is stiff U.S. tariffs on auto imports, followed by the indirect impact of another round of U.S. tariffs on up to US$450 billion of Chinese goods and retaliation by China. Such restrictive trade policies could bring disruptions in global supply chains, lead to bad inflation and weaken global demand. If the BoC continues with its current approach of assuming that current trade arrangements will be maintained, the threat of auto tariffs and further trade tensions between the U.S. and China are unlikely to play a major role into the July 11th decision. In this scenario, the BoC is likely to lift its policy rate by 25bps next month. In case auto tariffs are enacted later this year by the U.S. White House, the BoC would then have the opportunity to adjust to deteriorating economic conditions and shave the overnight rate target if judged necessary. Alternatively, if the BoC is convinced of the inevitability of auto tariffs, it may choose to maintain its policy rate at the current 1.25% level until the trade threat recedes. Finally, if the Trump administration moves swiftly to implement its auto tariffs before July 11, we may even see the BoC lower its policy rate in the near term.

Bottom Line: Domestic economic momentum remains supportive for a hike. However, trade tensions increased rapidly after the G7 meeting and it would be surprising to see them recede before the July 11th decision. Notably, it remains to be seen if the possible election of the left-leaning presidential candidate Obrador in the July 1st Mexican general elections will fuel trade tensions further or if it will momentarily divert Trump’s attention towards the Mexican/U.S. border wall. This being said, in our view, the tariffs announced so far by the Trump administration are not, in isolation, sufficiently detrimental to the Canadian outlook to convince the BoC to postpone raising its overnight rate target to 1.50%; however, a mounting threat of new tariffs on cars and/or of an escalating trade war with China and Europe might. Furthermore, unilateral action on trade by the U.S. against Canada before July 11th might force the BoC to reverse course and lower the policy rate in the near term. 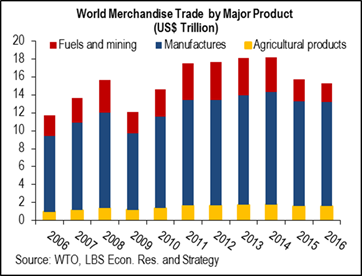 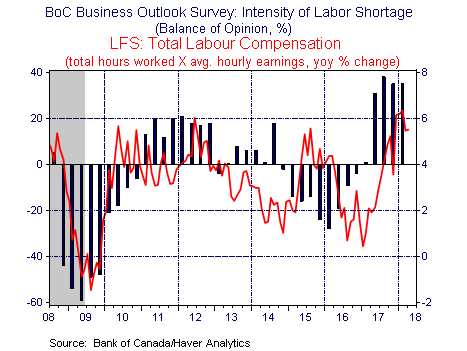