Monday, May 6: Five things the markets are talking about

The latest U.S. jobs report showed that hiring picked up in April, with the unemployment rate falling to its lowest level in 50 years. It gave a boost to major U.S. stock indexes and weighed on the mighty U.S. dollar and 10-year Treasury yields.

Nevertheless, a couple of tweets from U.S. President Donald Trump over the weekend has managed to put global equities on the back foot, pressured Treasury yields even further and has investors seeking shelter by owning risk averse currencies.

Note: Chinese Vice-Premier Liu He is scheduled to arrive in Washington this Wednesday.

On the data front, Eurozone retail sales will start the week followed by German manufacturers’ orders and French merchandise trade. In the U.K., first-quarter GDP will be posted Friday. Down-under, Aussie trade and retail sales data will be posted early in the week followed by mid-week policy announcement from the RBA amid expectations for no action. The RBNZ will also be issuing a statement this week. Chinese CPI data are also expected mid-week.

Stateside, inflation will be the focus, but it will be late in the week, first producer prices on Thursday then a consumer price report on Friday that is not expected to show much acceleration. For Canada, housing starts will be posted on Wednesday, the trade balance on Thursday, and the labour force survey on Friday where a gain is expected.

Global equities have plunged after the sudden intensification of Sino-U.S. trade tensions, sowing fears the conflict could spill over into slower economic growth.

In Asia, both the Nikkei225 and the Kospi index were closed for a bank holiday. In Europe, the U.K. was closed for the long weekend.

Down-under, Aussie shares closed atop a three-week low overnight after U.S’s threat to raise tariffs on Chinese goods spoiled hopes for an imminent trade deal between the world’s largest economies. Broad-based losses pushed the 0.8% lower at the close of trade. The benchmark was little changed on Friday.

In China, investors were caught off guard by Trump’s tariff threats, but managed to dump equities and sell the yuan currency as a fresh deterioration in Sino-U.S. trade tensions began. Regional bourses fell the most in more than three-years. The blue-chip CSI300 index and the both tumbled more than -5%. In Hong Kong, the slumped -3.3%.

In Europe, regional indexes trade sharply lower across the board as U.S trade tensions weighs. 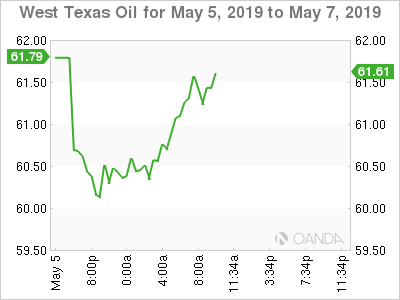 Oil prices have tumbled overnight after Trump said he would sharply hike tariffs on Chinese goods this week, risking the derailment of trade talks between the world’s two biggest economies.

The prospect of months of trade talks being derailed by Trump has raised market concerns over future demand for oil.

Also providing pressure on prices is U.S. data showing an increase in production. production has already surged by more than 2 million bpd since early 2018, to a record 12.3 million (NYSE:) bpd. This has made the U.S. the world’s biggest producer. However, data from Baker Hughes Friday showed that the number of rigs drilling for gas in the U.S. fell by 3 to 183 in the week to May 3, while oil-directed drilling rigs rose by 2 to 807.

Note: Gold was in demand in India and Singapore last week as a correction in prices ahead of a key gold-buying festival supported purchases even as major centres were closed for most of the week due to holidays. 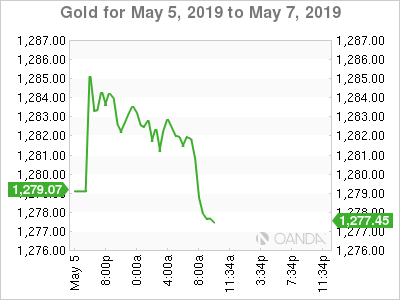 Core eurozone bonds yields fell after Trump said he would hike U.S. tariffs on $200 billion worth of Chinese goods this week and target billions more soon.

The outlier this morning is Italian government bonds which have underperformed the rest of the Euro-periphery with renewed concerns about the stability of the Italian government. Italy’s anti-establishment 5-Star Movement raised pressure on its government partner to dismiss a junior minister under investigation for corruption.

Italy’s short-dated bonds are up 6 bps, while the spread of its 10-year debt over Germany widened to 260 bps.

In China, the PBoC cut the Reserve Requirement Ratio (RRR) for Small and Medium sized banks by up to 350 bps to 8.00% (effective May 15). Funds released would be used for lending to small and private firms. 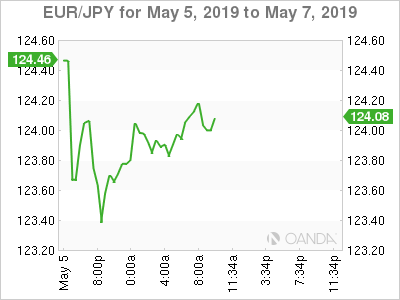 is off 0.4% at £1.3120 area with cross party Brexit talks resuming tomorrow. Sterling is finding it difficult to build upon market optimism that a Brexit compromise seems to be taking shape and have the UK move forward with a plan to get a Withdrawal Agreement passed by Parliament.

is off 0.4% with Japan still on holiday. The yen currency (¥110.82) remained a beneficiary of safe-haven flows over trade concerns.

The Swiss franc is also rising, with down 0.1% at $1.1375. The AUD is amongst the biggest fallers, given Australia’s close links to China, with down -.7%, while emerging market currencies drop. 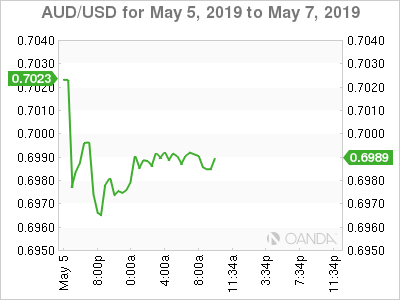 Data this morning showed that investor morale in the euro zone improved this month for the third month in a row to hit its highest level since last November, helped by a resilient global environment and the danger of a disorderly Brexit being averted until October.

The Sentix research group said that its investor sentiment index for the euro zone rose to 5.3 in May from 0.3 in April – the market was expecting a reading of 1.4. 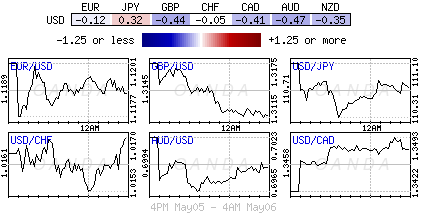