On Monday, Prime Minister Stefan Lofven announced his new cabinet ministers after he survived the Riksdag vote on Friday, effectively putting an end to Sweden’s unprecedented gridlock. Some of the key ministers are:

All of the major cabinet members are from left-leaning parties. However, the deal brokered between the Liberal and Center parties with Lofven has resulted in his party adopting center-right policies in exchange for passive support and allowing his minority government to rule. Some of these include abolishing rent controls on newly built apartments and possibly loosening labor laws.

However, despite the respite offered from the conclusion of the gridlock, political risk remains. The Left Party threatened that it was “prepared to bring down this government” if the administration crosses the line on key housing and labor laws. They acted as kingmakers in Friday’s vote.

Lofven must now walk a fine line between passing center-right policies that are bold enough to satisfy the Center and Liberal parties but also mild enough for the Left party to stomach. Upsetting either of his supporters could result in a vote of confidence that could plunge Sweden into another parliamentary crisis.

USD/SEK has been trending higher since early-January – breaking several key support levels along the way – but is struggling to make substantial leaps above 9.0086. However, the pair may have greater upward momentum when 2019 headwinds began to blow that will put pressure on Sweden’s slowing economy. 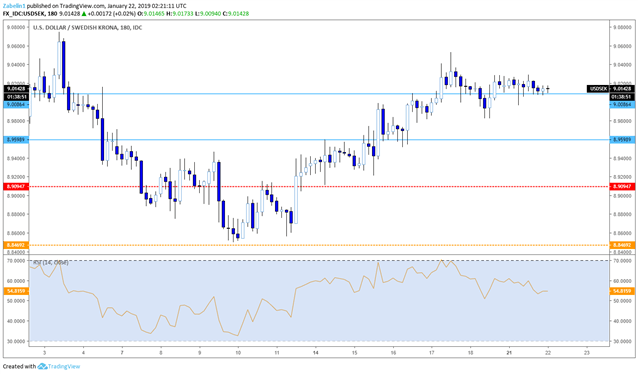