HomenewsAlertsSigns Growing for a Potential Top Amid Crowded Positioning

Signs Growing for a Potential Top Amid Crowded Positioning

US Dollar outlook over the quarter

A Financial Times report on Thursday suggested that China and the US were making huge strides to reach an agreement ahead of this month’s G20 summit. Consequently, this helped buoy risk sentiment, while also denting the strength in the US Dollar with tensions easing somewhat before President Trump and Xi’s intended meet. However, while the agreement will likely be on a framework to continue further trade talks, as opposed to a grand deal, which was also implied by US Commerce Secretary Ross. Positive sentiment may continue ahead of the G20 summit, in turn keeping USD strength at bay.

Given the growth divergence between the US and the rest of the world, alongside the continued pick up in US yields. Speculators have continued to pile into USD longs to a point where the trade is getting increasingly crowded with net longs valued at roughly $30bln, according to the CFTC report. As such, with positioning arguably stretched, further upside in the US Dollar from current levels is seemingly limited. Consequently, with the potential for the US Dollar to begin topping out, bearish US Dollar may be best expressed through USDJPY shorts. 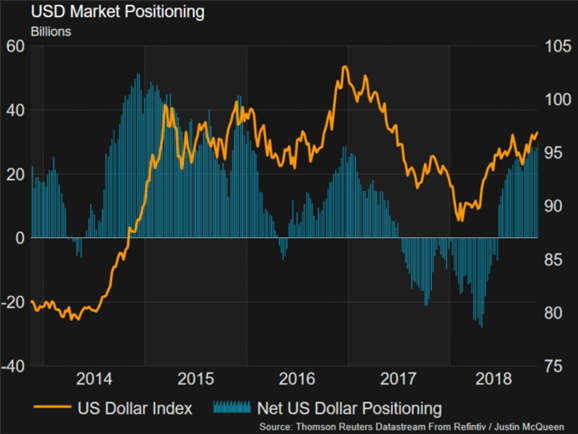 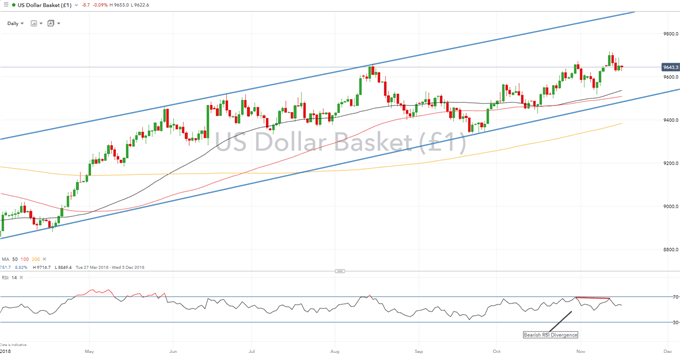 While the US Dollar sticks within the rising channel. The bearish RSI divergence suggests that a top in the US Dollar may be approaching. Eyes on for a break below 95.85 before a move towards 95.15 with resistance situated at the 97.00 handle.