Sinking Sentiment And Rising Rates May Make For A Rocky Summer

The latest Fed revealed that a taper of QE might be coming sooner than many had expected. That sent rates for both nominal and TIPS sharply higher. If the economy is in recovery, which it seems to be, then the rate could be heading back to 2.35% over the next several months. That would be a big problem for stocks, as PE multiples would likely need to contract, and that would send stock prices sharply lower.

Additionally, market sentiment may now be moving to more of a risk-off mentality, with assets like , , , and all beginning to show signs of weakness. These are apparent reversals, especially after their parabolic moves higher over the past 6 months. This could be a bad omen for equities as well.

It doesn’t stop there because some of that risk-taking witnessed in the winter of this year, when the most shorted stocks went parabolic, has collapsed, well ahead of the declines in lumber, Bitcoin, copper, and oil. What is more worrisome is how closely correlated these most shorted stocks have been to the . This could be sending a troubling message that the broader markets may be the next to follow. In fact, many of these heavily shorted stocks that surged in the winter helped to lead the Russell 2000 index higher, and now the Russell even appears to be in trouble. 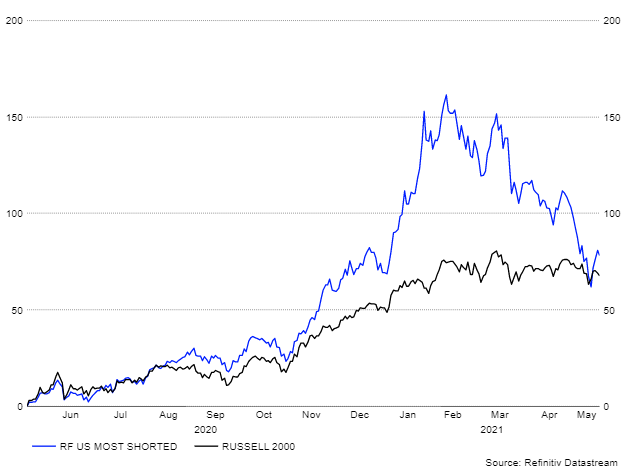 The most shorted stocks in the Refinitiv index began rolling over in the middle of February and have fallen more than 30%. That has resulted in the Russell 2000 completely stalling out after this group led the index higher starting in November.

This decline appears to be the most apparent change in risk-sentiment in the markets, outside of the collapse of Bitcoin. This means investors are likely to be even more sensitive to changes in monetary policy. Especially if the Fed prove that tapering may be coming sooner than later. The bond market expects that something may change, given the response in yields. Treasury Inflation-Protected Securities (TIPS) saw their rates rise sharply, especially on 5-year TIP, which rose by nearly 10 bps following the releases of the minutes.

If TIPS rates continue to push higher, one would think that nominal rates would need to climb, too, especially if market inflation expectations remain unchanged. Currently, the 10-year breakeven inflation expectation is about 2.45%. Over time if the should rise, pushing back to 0% from its current -80bps, it could result in the 10-year rate rising to well over 2%.

This would undoubtedly prove to be an issue for equity markets, as higher nominal and real yields would lead to lower PE ratios for the over time. It would also result in stocks with the highest multiples being hit the hardest. This trend has already been present in the and many of the growth stocks. The NASDAQ 100 ETF () has fallen by more than 4% since the end of April, but many stocks within that index are down significantly more. 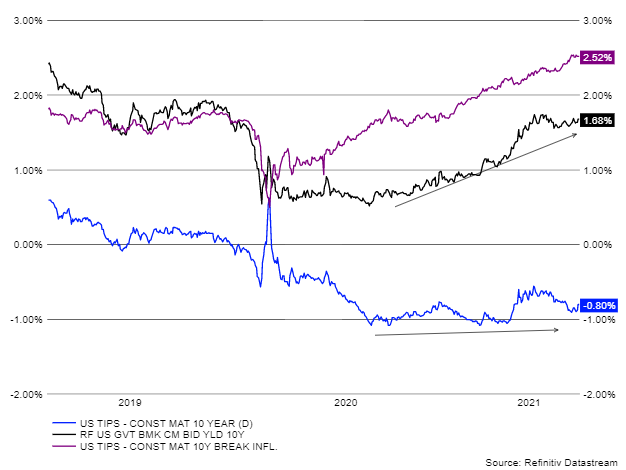 If there is a shift in risk sentiment taking place and investors do become nervous about Fed monetary policy changing, then the sentiment is likely to deteriorate across the rest of the marketplace. With decreasing sentiment comes lower multiples which will lead to lower equity levels. Couple that with higher interest rates, and the next few months could prove to be very rocky.