Some Context Around Moody’s Downgrade Of Ontario’s Debt

Moody’s ratings services downgraded Ontario’s long-term domestic debt last week, from Aa2 to Aa3. We interpret the downgrade as a reaction to the Fiscal Update released Nov. 15.The move should not come as a surprise since the Fiscal Update reiterated that the province’s deficit for this year is poised to almost quadruple, from $3.7 billion in 2017-18 (0.4% of GDP) to $14.5 billion (1.7% of GDP) in 2018-19. While the government strongly reaffirmed its intention to restore fiscal sustainability, investors will have to wait until next spring’s 2019 budget for the exact details on how it intends to do so. Hence, citing “multiple years of material consolidated deficits” fuelled by a slowdown in revenue growth and rising debt and interest-on-debt burden, the ratings agency downgraded the long-term rating outlook of the province.

Based on a pure “status quo” assumption, the fiscal situation is certainly dire. Last Monday, the Financial Accountability Office of Ontario (OFA) published its latest budget Outlook. Taking into account the new government’s policy actions since taking office, which for the most part reduced the revenue intake, and assuming no policy action to rein in the deficit, the FAO forecasts that Ontario’s deficits will range between $16.1 billion and $17.4 billion in the next four years (see Chart).[1] As a share of GDP, those deficits would be roughly constant at 1.7% but net debt would increase to a daunting and record-high 45.2% (see Chart). 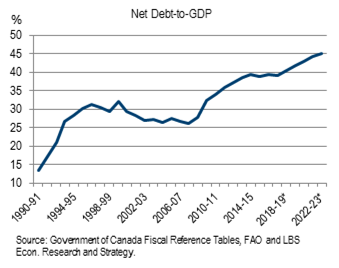 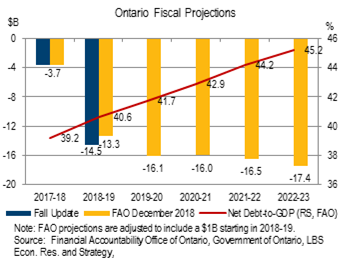 Before the downgrade, Moody’s rating of Ontario’s long-term debt was a notch above Fitch’s (AA-) and two notches above S&P (A+). The move brings all ratings closer on the credit scale, with Moody’s and Fitch’s on par and S&P a notch lower (see Table 1). The good news is that, with the credit rating outlook now stable, Moody’s sees the possibility of further deterioration in the province’s outlook only as “modest,” putting a sort of floor on the fiscal outlook.

Finally, it is possible that prior to budget 2019, Fitch ratings follows suit and proceeds to downgrade, which would bring it on par with S&P. On the other hand, the PC government has an opportunity with the 2019 budget to present a credible path towards fiscal sustainability, possibly preventing Fitch from downgrading the province (since June 2018, Fitch has a negative perspective on Ontario’s long-term debt).

With the government heavily citing the EY line-by-line review of Ontario’s expenditures in its Fiscal Update and a strong commitment to restore fiscal sustainability, we are of the view that important measures will be taken in budget 2019 in order to put the province on a credible deficit reduction path. Moreover, the very large infrastructure program elaborated by the previous government ($230 billion over 14 years starting in 2014-15) could be consolidated and largely reduce borrowing requirements in the years to come. Together, those measures would improve Ontario’s credit ratings outlook.