On Monday, we have retail sales figures for June to be released at 12;30 GMT time. On Tuesday at 14:00 GMT, the Fed’s Powell is scheduled to deliver semi-annual testimony before the Senate Panel, which may cause a stir in the event of an overly hawkish or dovish tone, but is more likely to come and pass as a non-event. Trade war headlines will remain a looming threat, but have yet to have much of lasting impact each time something hits the wires. Earnings season will begin to heat up, look for outsized moves at the least in some of the major names that make up the indices (most influential will be FAANG in the Nasdaq 100). For a schedule of all data next week, check out the economic calendar.

The S&P has been in rally mode as of recent, making an attempt to break out towards the record high at 2873. The outlook from a trading perspective isn’t generally favorable, as fresh longs in a low momentum market run the risk of a pullback, even if only minor, while shorting into strength requires vigilance as the market can drift higher. For now, we’ll reserve ourselves to the sidelines until more decisive price action presents itself.

Nothing real notable on the data docket for next week; risk trends (likely swayed by trade war headlines) will be a theme to watch. The range–bound euro at the moment is having limited impact on the direction of Euro-zone indices.

The DAX is finding difficulty in trading above the 12550/610 region, with a bearish formation on the short-term chart showing up last week (discussed in this technical commentary/video). The pattern triggered, suggesting downside from here, but will need to stay below the recent high to remain in play. On further weakness, the 12200/100 area will be targeted.

Check out this guide for 4 ideas on how to Build Confidence in Trading. 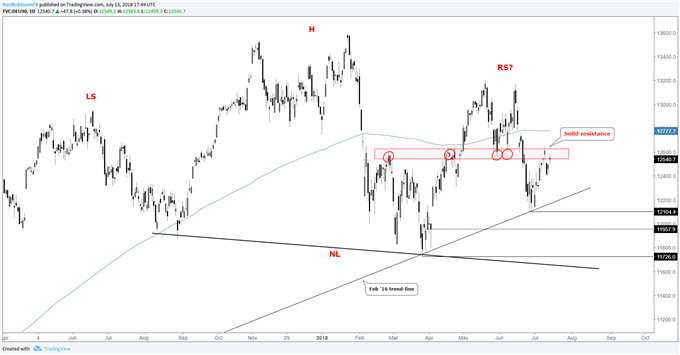 On Wednesday, U.K. CPI will be released at 8:30 GMT time, but if any market reaction develops from this it is likely to be seen more in sterling than stocks. Risk trends with trade war news will be a general global theme. Brexit headlines of course will remain in play as a driver.

The FTSE is a difficult handle as the new week is set to begin. It is having troubling trading above the top-side trend-line of the channel off the record high, but doesn’t want to move lower either. If the footsie is to rally it will need to firmly cross over 7700, otherwise with the short-term trend still pointed lower it is at risk of dipping back towards 7500 or worse.